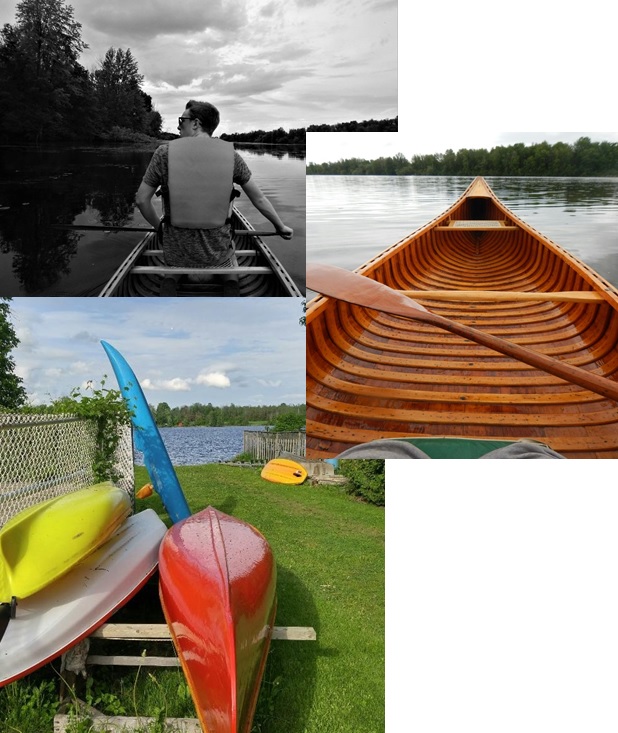 by John Richardson member of the Manotick chapter

We found it very rewarding to restore my Mom’s old canoe, and to experience the gratitude of her new owner, my daughter Christine. Below is my mother in the helm position and her sister in the bow that was the summer of 1948. The canoe is a 71-year-old Peterborough 16-footer, two-person canoe, built by the Peterborough Canoe Company in Ontario where my Dad purchased her new in 1948,I was 3 yrs. old.

Over the years she was used for leisure but also as a hard worker to haul rock for building wharves. She transported lumber for building cottages on Lake of Bays in Muskoka. When the day’s work was done, she was an excellent craft for fishing, casting lures into nooks and crannies at the base of cliffs and trolling for lake trout in the depths of the lake.

In my early teens I carried this canoe over rough terrain to several smaller lakes on camping trips with my cousins. On one such trip she suffered several broken cedar ribs and torn canvas. With the era of fiberglass upon us, my dad had a good look at her damage and decided to glaze her hull instead of replacing ribs and applying new canvas. I’ve always regretted his approach to repair because it added considerable weight to the boat and pretty much ended her portaging adventures.

From about 1960 to 2006 the canoe was never used and hung from supports in our boat house.
In 2006 we moved from Lake of Bays to the Rideau river. I really had no desire to restore the badly stained interior wood and several damaged areas on the rub rails. My son in law decided to tackle the job, slopped in some stripping fluid and scraped about a third of the interior. She looked very sad, so I decided to take on the job and finished it by scraping the cedar clean, using methyl hydrate and very sharp scrapers. Below she sits with 8 coats of varnish and new caning on the seats.
Both breast hooks were sanded smooth and unfortunately the Peterborough decal was lost in the process. The fiberglass was sanded extensively, patched, and then painted with Epoxy Red. I then sanded and varnished the nice, light weight cedar paddles that were especially made for her about 40 years ago.

She is now used, in favor of all our plastic paddle toys, for seven months of the year by my daughter, son-in-law and grandson. She’s never been happier