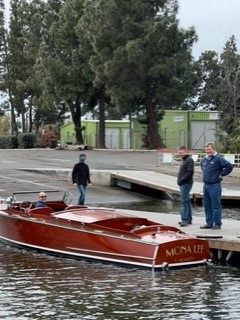 It 1989, OMC corporation had just acquired Chris-Craft out of bankrupcy and they were looking for a way to turn the company around.  Chris Smith (grandson of the original founder) had stayed in Holland, Michigan, and continued to work with Grand Craft boats.  Chris had an idea to build a replica of the original 24’ Model 103 from 1930 and pitched the idea to the executives at Chris-Craft.  They loved the idea and agreed to contract with Grand Craft to build an exclusive run of 16 boats plus one prototype (Mahogany Lady which is still on Tahoe) and then the design would not be built again. The idea was that Chris-Craft would use them as “bait” at boat shows and high-volume dealers. Because many of the original craftsman who had worked for Chris ended up at Grand Craft, Chris Smith supervised and worked with some of his original pals to hand build these boats.  They are triple layer west system bottom, double layer west system sides with Honduran Mahogany and an OMC/Ford 351 for power. 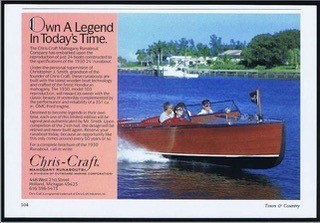 My story is that I had ridden in ACBS member Lew Dobbins’ Redhawk Model 3 triple at a Bass Lake event a few years back and was absolutely hooked on that boat.  I owned a 1976 Century Arabian at the time, but after a few years I decided that I really wanted something a little bigger and different.  Another member, Norm Kitching, had a Grand Craft in the club and invited me over to look at it because he was considering selling it.  His was a utility model, but I was very impressed with the construction and build quality of the boat.  I started searching “Grand Craft” on the web and came across a boat named Easy Rider in Portland, Oregon, that caught my eye.  The pictures were terrible, but I happened to have friend who lives about 15 minutes from where the boat was being stored.  He drove over and met the broker and checked the boat out for me. The boat was actually not a Grand Craft, it was a Chris-Craft with CC hull numbers, title, and badges because they were actually built for Chris-Craft to sell by Chris Smith. My buddy called me that night and said, “If you don’t buy this boat I am going to!”  Turns out it had lived its entire life in a heated airplane hangar in Portland, had only 192 freshwater hours on it with the original supple leather seats, and the owner had passed away. The boat had been sitting for 14 years unused in that hanger with 2 covers over it!  I negotiated a deal and drove up and brought her back to my home in Alameda (SF Bay Area). 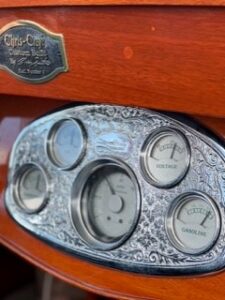 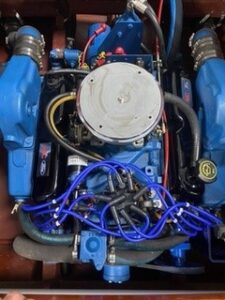 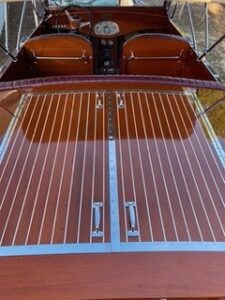 After a renaming ceremony last Saturday, we officially launched her, and she floated (not a drop of water actually)! With the help of ACBS members Sam Moore, Bobby Gastel, and Layne Davis, she had a very successful first day on the water for the first time in over 14 years.  Mona Lee was my mother’s name, and also Lee was my father-in-Law, so it just seemed to fit. 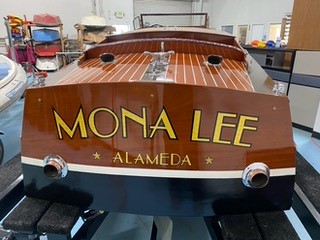 I have located 7 of the original 17 boats including one that was used in Disney World Orlando Breathless for over 20 years in commercial service.  Another belonged to Country music legend Waylon Jennings and is named Goin Jessie; she is on Table Rock Lake in Arkansas and is owned by the Bass Pro Shops owner at Big Cedar Lodge. 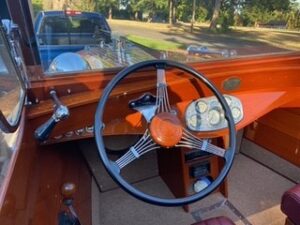 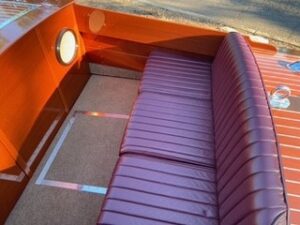 We are very excited to begin showing Mona Lee in ACBS events around Northern California and the Delta region and hope to get her next to Redhawk for some pictures with Lew.