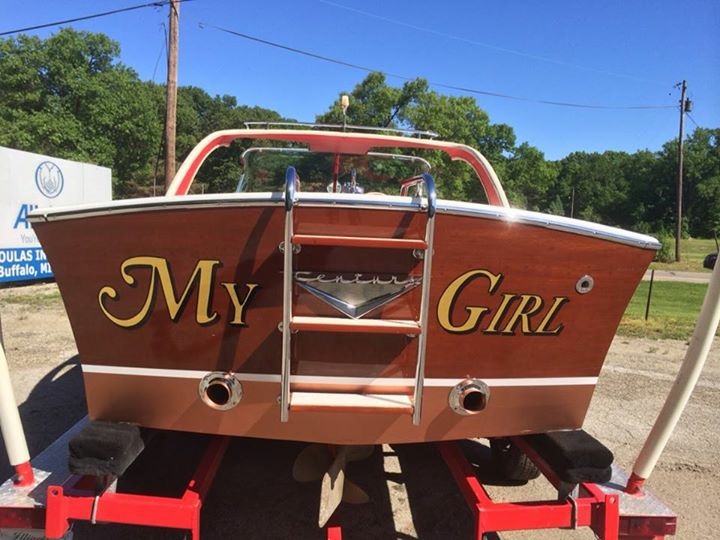 by Mitch Berg member of ACBS

In 1962 my brother and I were trying to talk our Dad into buying a used 61 Coronado Gull Wing. Dad said NO MORE USED BOATS! In the spring of 1963, much to our surprise, our Dad purchased a brand new 1963 Coronado Hardtop. We picked it up in Manistee and towed her back to New Buffalo MI, sitting on her cradle on a flat bed trailer, attached to a bumper hitch on a 57 Dodge Sedan! To say that was a scary trip would be putting it mildly. In 1968 I went away to college, after graduating, getting married and life getting in the way, boating was just not in the cards.

Fast forward to 1995, My Girl was purchased upside down and gutted, her 390 ci 325 HP Dual Quad Caddy sitting on a cradle. I was in love knowing what was waiting for me once she was completed! I commissioned the seller for her restoration. Unfortunately the 22 month process was filled with broken promises, deception, lies, skyrocketing costs and later some sketchy workmanship became apparent. Over the next couple of years, thanks to Macatawa Bay Boat Works the sins of the builder were corrected!

Her maiden voyage on Lake Michigan, the day I had been waiting so long for, was an amazing thrill! What a summer that was. As we all know, the best feeling in the world is cruising on the lake on a calm day. Imagine my delight, during her visit to the Thoroughbred Roundup in Manistee that fall, she was honored with the Skippers Choice award!

I have to say even in the off season, every time I open the storage building I smile from ear to ear. When pulling her on the trailer or when we’re underway in the harbor or on the lake, the reactions from everyone that sees her never gets old! Oh Baby, I’ve gotta a sweeter song than the birds in the trees! What can make me feel this way? My Girl, talken bout, talken bout, My Girl.