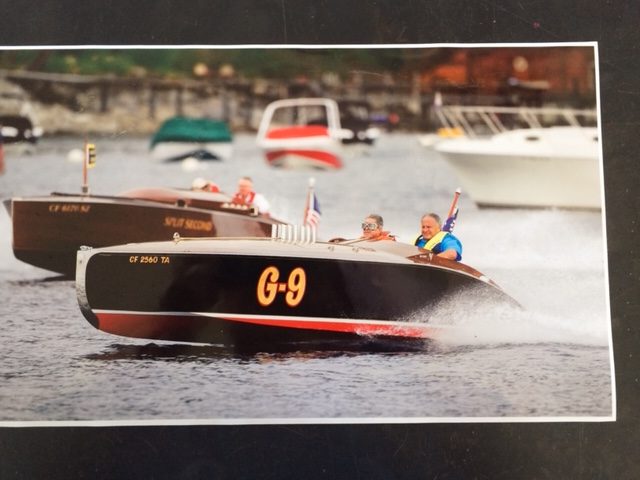 by Wes & Janet Selvidge members of the Southern California chapter

In 1995 I began the restoration of a 14′ Wooden Runabout that had been on the bottom of Lake Tahoe for 40 years. It took four years to complete that project and I swore I would never do another. I lied!

In 2003 I saw an ad in Classic Boating for a 23′ hull that looked like it was going 100 mph just standing still. I had to have it. This boat was designed by three wooden boat enthusiasts from the Seattle area and commissioned to a builder in Australia, Paul Dewhurst of Golden Era Classics. Four hulls were built in the form of a 1930’s Gold Cup Racer and then shipped to the U.S.

Thus began another three year project and the boat, Nine Lives, was launched in 2006. I considered several engine options but settled on a Jaguar V-12. This engine was originally developed to beat the Ferraris at LeMans, but rule changes eliminated its chance to compete. It was then produced in passenger cars until 1994 when it was finally abandoned due to smog emission rules. By shedding all of the smog equipment, I took it back to its racing roots and it makes a fine boat motor.

My boat, Nine Lives, won Peoples’ Choice in its first outing at Lake Arrowhead and then Best Contemporary at the ACBS show at Lake Tahoe.

Since then, I developed a more powerful version of the same engine that develops 600 hp. It pushes the boat to 65+ mph and has proven to be the fastest vintage V-12 on Lake Tahoe in several “impromptu” races.