Not Just My Brothers Boat 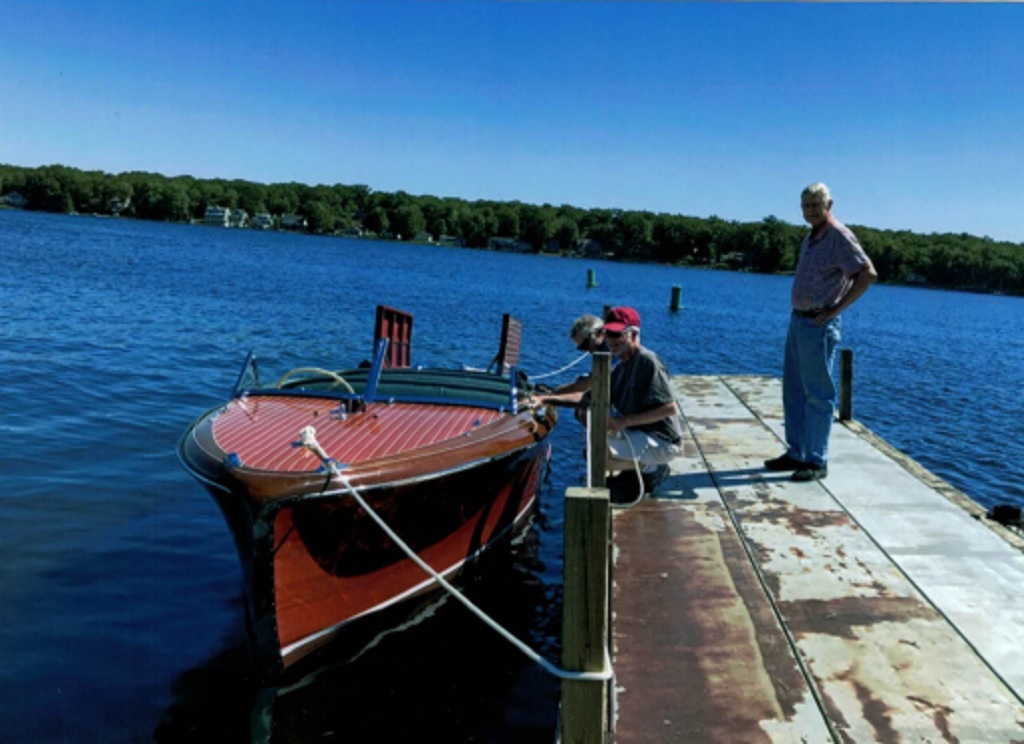 by Pat Penhallegon member of the Blackhawk  & Bluegrass chapters

In the summer of 1966, my older brother Bill, who was home between his sophomore and junior year of college, answered the newspaper ad for this 20′, 1942 Chris Craft Custom Runabout. He and his best friend each chipped in $250 and bought it. The lady who sold it had only owned the boat for a short while, when coming in from a cruise she accidently rammed the dock knocking it over. Amazingly the boat survived the crash which said a lot for the boat considering that it was a very sturdy dock supported by old telephone pole pilings. It was apparent that the boat had had a pretty hard life with several previous owners.

One previous owner had painted the boat black and someone had replaced the original aquamarine leather interior with white naugahyde. Despite being a little tattered, no one cared. The boat provided hours of fun on ‘Lake Decatur and oh that wonderful sound of the inline six Hercules motor! That first summer the boat sat in the water tied to the dock. I remember going out with my brother almost every day to bail out the bilge with a plastic bucket. Sometimes, after a rain storm, it was necessary to bail it out an extra time.

A few years later Bill’s friend relinquished his interest in the boat. That same year Bill enlisted in the air force and the boat went into the barn. It remained in the barn until the early eighties when, at the insistence of his son, Bill hauled the boat out of the barn. Together the two of them began working on it. They stripped the black paint and replaced a few planks. Many hours were spent applying coats of varnish and replacing the naugahyde. After all of the hard work they were disappointed to find that the bottom planks would no longer swell enough for it to float without taking in an unsettling amount of water. Sadly the boat went back to the barn.

In the late 90’s I bought the boat from Bill who had decided to sell it. Again, it sat in the barn. Through the grapevine, word got around about the existence of this old boat hidden away in the barn. After turning down offers to buy the boat I decided that it was time to get it out of the barn. In 2015 I hauled the boat to Manistee, Michigan to Danenberg Boat Works for a total restoration. Don found many broken frames which were most likely the result of the accident at the dock. He replaced the bottom using the 5200 method. Researching factory specs and using original materials, he brought the boat back to life better than when it had left the factory 77 years earlier. It was a three year project and was Don’s final restoration before retiring.

In June of 2018 I took my brother with me to pick up the completed boat and together with some long time old friends from Decatur who were there for this special event, we put her in Pentwater Lake for her maiden voyage as a restored boat. The following September Bill went with me to Port Huron, MI where the boat was entered into a judging competition at the ACBS International boat show. She won a platinum award in her category.

Today, riding in this boat brings back memories of the summers of my high school years hanging out on the lake. It was the boat that I learned to ski behind. It provided a great way to spend time with my older brother and his friends and oooh the sound of that motor!