Nothin’ Shady about this Lady Anymore 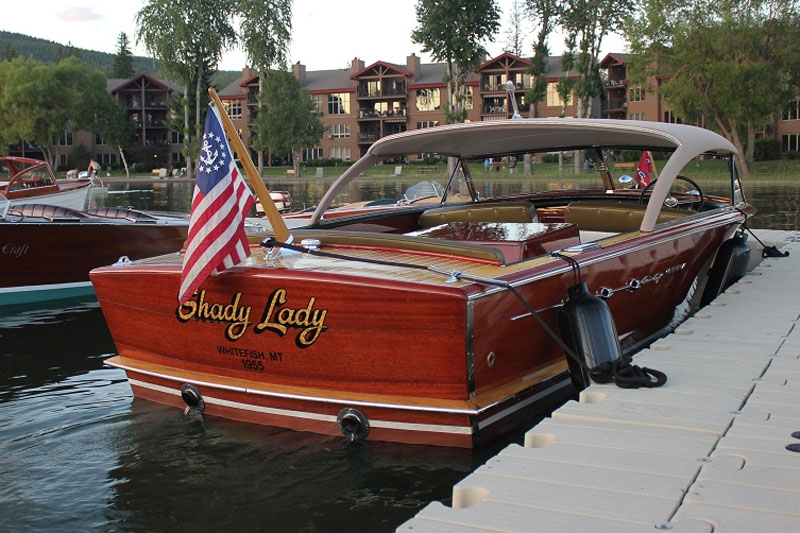 Shady Lady is owned by Tim and Deb Salt, members of the Big Sky Chapter. The following description of the boat was submitted for the ACBS membership files. Shady Lady, 66 years old and still dancing, is a 1955 22-foot Chris-Craft Continental Sedan Hardtop. She is powered by the original 200 HP Chrysler Imperial Special M45S (Hemi) engine. The Continental model line was introduced in 1955 as Chris-Craft’s top-of-the-line utility. There were 102 22-foot Continentals built in 1955, the only year the 22-foot Continental was built. Of those 102 Continentals, 28 were equipped with the 200 HP Hemi engine and 20 were built with the sedan hardtop option. Only three were built with both the Hemi and sedan hardtop options.

Shady Lady is the only 1955 22-foot Continental Sedan Hardtop with a Hemi engine listed in either the Antique and Classic Boat Society Directory or the Chris-Craft Antique Boat Club Hull Registry. Shady Lady is believed to be the only one of the three built in 1955 still on the water.

The boat shipped from the Chris-Craft Cadillac, Michigan factory to John G. Rapp, a Chris-Craft Dealer in San Francisco, California, on June 14, 1955. She was extensively restored in the mid-80s. A West System bottom was installed in the mid-90s and was she was refinished in 2011. We purchased the boat in 2010 in Indian Lake, Pennsylvania and are the eighth owners.

In the past, she has gone by the names Happy Times and The Boat.  She was reportedly used for illegal activities in the Sacramento Delta area in the 1970s. With her signature hardtop and the legend of her illicit past, it was only fitting to christen her the Shady Lady on June 14, 2010, her 55th birthday.