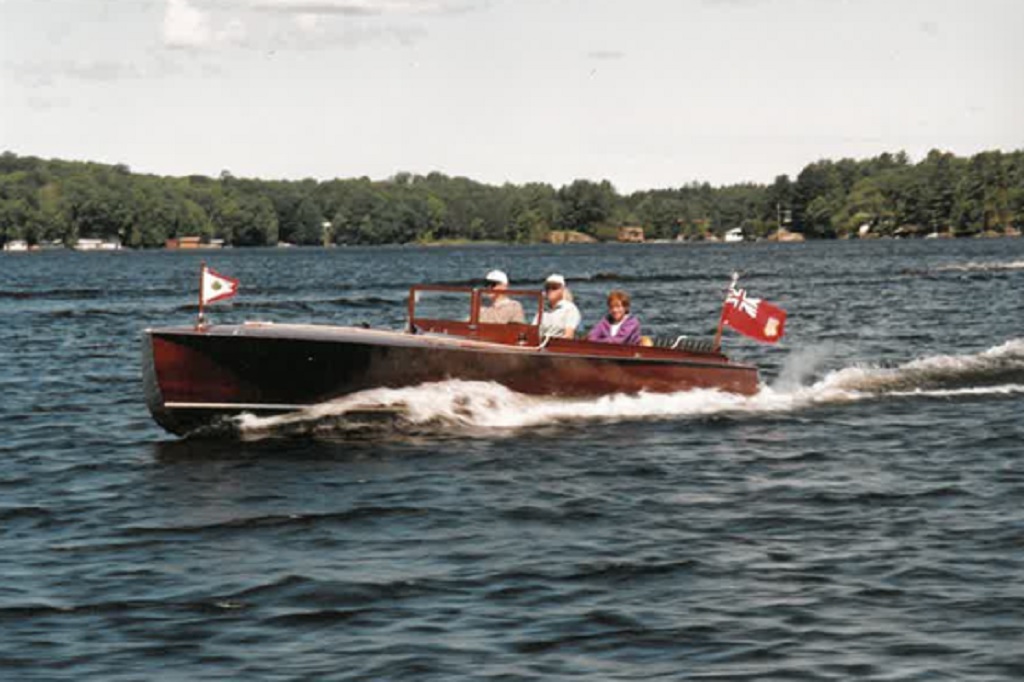 By Whitey Smale member of the Sunnyland chapter

Joe Charles phoned me as I was cruising into Midland to tell me he had a
1929 or 30 26 ft Ditchburn for sale. He said he could meet me at the Midland dock later that afternoon to show me a picture of the boat in the water priced at $8000.00. It looked good to me, so I bought it from the picture as it was in New Brunswick. Joe said he would get it and deliver it to my shop on Sunset Bay in Lake Muskoka.

A month later he backed it down the driveway and it did not look at all like the picture he had shown me. The deck was off, and it was a foot short because the curved transom was removed and a straight one installed. The bottom was taken off and new ribs installed nailed with galvanized nails to a new keel. A Down East Bottom had been started using 3/4 x 3/4 boards glued together. About 1/4 of the bottom was done. The motor had been taken out and it needed work. I went ahead and bought the boat because Joe had driven all the way to New Brunswick and he was shocked when he picked it up!

It did not look like a Ditchurn, so I asked Murray Brown and he thought it was a Ross. Neither Mike Windsor nor Stan Hunter had any idea what it was either.

I started work by changing the transom back to its origin – I lengthened it one foot and restored the curve. There were 54 ribs that had to be bolted to the keel with 6 bolts per rib. Then I made a stem. At that point I took the boat to Mike Windsor for a new bottom. When Mike finished that my friend Jack Law said I should get him to do the hullsides and finish the boat as I would not live long enough to do it myself. So that is what happened.

After working on the hull for so long I really knew what it looked
like! One day when I was in Port Carling I saw a boat on a trailer in front of Browns Appliances with the name Cora. By the time I turned around it was gone. I saw it again at the launching ramp in Port Carling so I stopped and told the owner that I had a boat the same which he doubted.

Mike Windsor finished it in 1996 and delivered it to my place on Lake Muskoka. One day out cruising I drove by the Cora’s boathouse on the Rosseau side of Port Carling and the owner (who is Robb McKee) came running to catch me at the locks. He said my boat was the same as his which he had purchased from the Ross family. The mystery was solved, my boat was a Ross not a Ditchburn. Ol Poke (the name on the propeller when I purchased it) is used on all three lakes and many boat shows as well as several weddings. The MLA is my favorite show but of course, I enjoy Gravenhurst also.