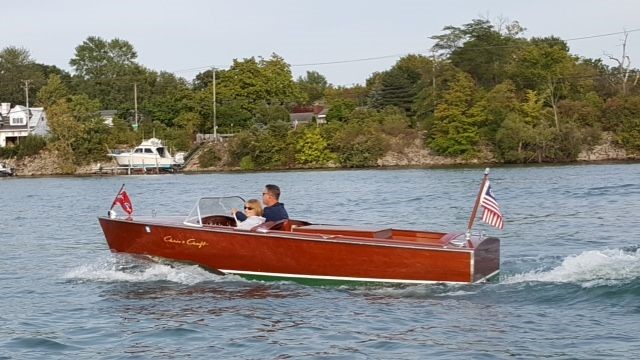 My wife Joan and I both learned to water ski behind a mahogany Century and after going to the wooden boat show in Hessel Michigan in 2016, we decided to keep an eye out for a Chris Craft or Century boat. As is usually the case, according to Joan, it didn’t take me long to find one.

We bought Old Glory in September 2016. It is a 1957 17-foot Chris Craft Sportsman, Hull No. CC-17-3386 and has the KL-105 HP engine. The Original Equipment Build Sheet shows it was built in the Cadillac plant. Al hadn’t had the boat in the water for about 8 years when we bought it and we didn’t splash the boat in 2016 either. We stored it in our garage for the winter.

After buying a new battery and starting the boat in the driveway, we decided to hang it at the Gibraltar Boat Yard in early June of 2017. We let it hang and swell for 5-7 days in the overhead hoist before dropping it back on the trailer and bringing it home. We launched the boat at a neighbor’s house and put it on our hoist at our home in GrosseIle MI.

The summer of 2017 was spent taking occasional short rides, tinkering with carb adjustments and idle speeds and looking in the forward bilge opening to see how much water was coming in and being pumped out. That was the toughest thing to get comfortable with as new wooden boat owners. In fact, we never did feel comfortable with that. Because of that, we contacted Jeff Funk at the Antique Boat Shop in Fort Wayne (Huntertown) Indiana to discuss the possibility of a 5200 bottom.

After visiting Jeff’s new shop in Indiana for a tour, we made the decision to invest in the 5200 bottom as well as a new custom made Boatmate trailer in September and October of 2018.

When I pulled the interior to have the bottom work done, we also decided to have the seats resurfaced as well. We used a local craftsman that did some previous work for us for the interior work.

We picked up the boat in October of 2018, complete with an entirely new bottom, new bottom paint color, new boot stripes, and a beautiful new trailer. We brought it home and Joan and I installed new flooring material and then installed the new interior.