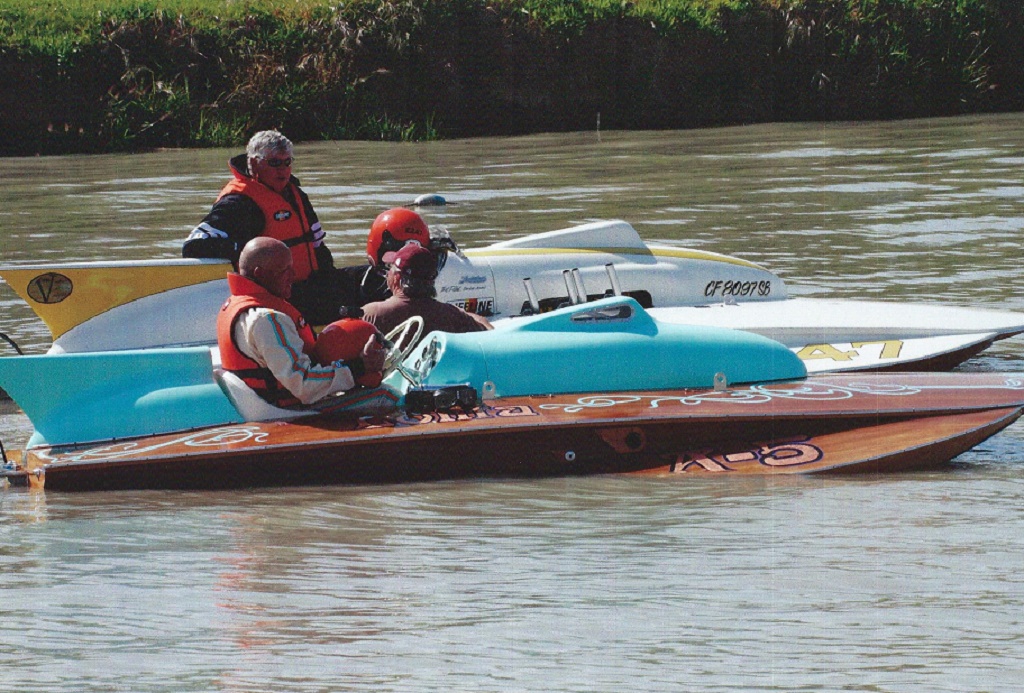 By John Lawrence member of No. California/ Lake Tahoe chapter

Three point Hydroplane racing began back in the 1940’s. Three notable builders emerged as the experts in hydroplane construction. All three builders became a father and son businesses. Henry Lauterbach and his son Larry. Ted Jones and his son Ron, and Les Staudacher and his son Jon, continues to this day building Hydroplanes.

Henry Lauterbach died in 2006. Henry built the E247 in 1971. Originally built to run an 8 cyl engine the boat was sold to Rudy Gurley who, along with Larry Lauterbach, replaced the 8cyl engine with a 4cyl engine and raced the boat under the name “Rudy’s Comet” from 1972 to 1974. The boat came close to winning the high points/or the 150 Cu. In class.

The boat almost won the world championship in 1974, but broke down on the last lap of the race. In 1975 Rudy once again replaced the engine with an 8cyl Plymouth. In 1975 the boat was sold to Bill Ha”is and Norm Lauterbach, Henry’s brother. The boat was renamed “Capt. Dumpling” and became the Region 4 Champion in 1976-1977. It also won the Presidents Cup in the Washington D.C race in 1977. The driver of the boat was Bud Roper, who also became part owner of the boat in 1977.

The boat was once again sold to new owner Tommy Hines in 1977, who was a well known driver on the east coast. He renumbered the boat E115 and ran under the name “Bad Company” Tommy replaced the old Plymouth engine with a 265 hp Chevy. Tommy raced the boat from 1977 through 1981, but he did not remember the racing history. In 1981 the boat was given to Tommy’s crew chief Bruce Mason.

Unable to contact Bruce, this part of the story is a mystery. Bruce raced the boat from 1982-1986 as indicated by the racing stickers on the interior of the boat upon ceasing to race the boat, Bruce left the boat on the ground, off the trailer, with no engine, to rot away. It looked as though this was the end of the old E247. Then along came Greg Strand and Skip Gilliam, who found the boat lying on the ground in the woods of Salem, N.J. Greg bought the boat from Bruce Mason for 500 dollars, in 1994.

The restoration was a 2 year project, replacing the left sponson, the outer edge of the right sponson, the rotten wood on the left side of the boat, and rebuilding the transom. Greg found an 8 cyl Plymouth engine.The intentions were to concourse and run the boat in flybys. However, the boat was never put in the water.

Marshall Mathews found the boat in 1999 and had it shipped to California. The E247 was a long way away from its east coast history. Marshall ran the boat at Lake Tahoe, every chance he had.

Aside from having a lifelong dream to someday own this boat, sit in the cockpit and put the pedal to metal, my real interest, at this time, is running the boat for fun, show the boat, and try to regain an interest in the Vintage Hydroplanes, back here on the West Coast Our family is beginning to grow. If you ever want your heart to pump rapidly, feel the excitement of speed and movement, contact me!