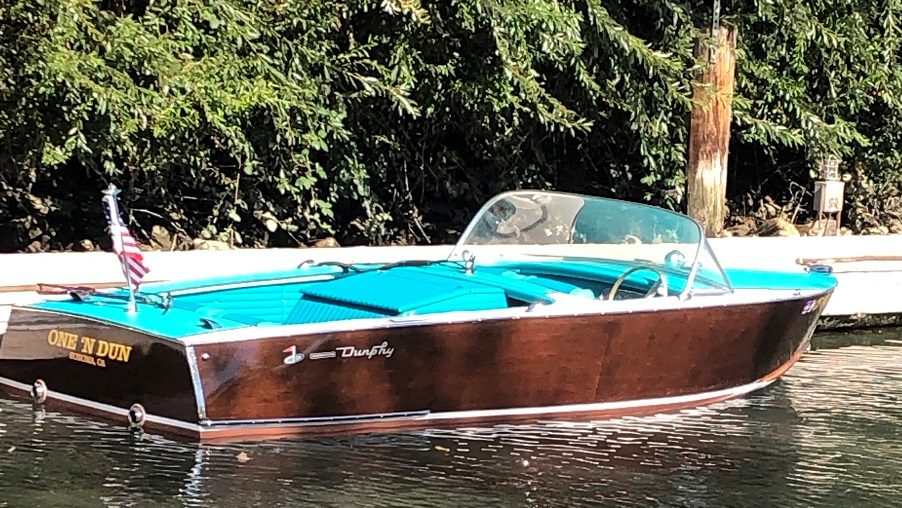 I remember it as vividly as any impressionable 12 year-old would, although it happened over 50 years ago. Being somewhat scrawny, I fit easily between the engine cover and gunnel as the boat roared across Northern California’s Lake Berryessa. Another much racier looking boat drew alongside, its driver asked if we had a speedometer (yes), then asked to be paced so he could record speeds. So off we went, side by side in 5 mph increments acknowledged via hand signals.

When the Dunphy driver signaled the next increase from 40mph, the racy boat waved off, signaling he was maxed out. With a wave and a smirk, the X-55 cracked full throttle, quickly leaving the other boat behind. I thought it was one of the coolest things in the world. Back at camp, the other boater eventually motored up and asked about the very fast Dunphy. He was very impressed. So was I. Those may have been my first thoughts of someday owning one.

A lazy on/off search began around 2000. A few here and there, until 2014 revealed this boat in Reno, NV. It had been ‘restored’ by the seller, was very complete and a deal was made. I finally had a Dunphy X-55. Still having CA hull numbers, I researched the ownership chain which pointed to Northern California. A Facebook search led to the daughter of our family friends (in fact our babysitter) who confirmed the co-incidence: I had just bought the very boat I had ridden in and learned to ski behind some 50 years earlier!

That winter I removed the Ford 312 Interceptor engine to do a freshen up much needed re-seal. The oil-soaked bilges needed attention and I enlisted Lake Tahoe’s Casey Brothers to rebuild the bottom and keel. A lot of fiddling and fussing, but always with a sense of history and nostalgia. A lot of odds and ends were provided by Carl Mielke of Sierra Boat Works in Tahoe, especially a rebuildable pair of Carter YH carbs.

My wife Maggie and I enjoy taking it out a few times each summer to Tahoe, the California Delta or back to Lake Berryessa, where it all began 54 years ago.