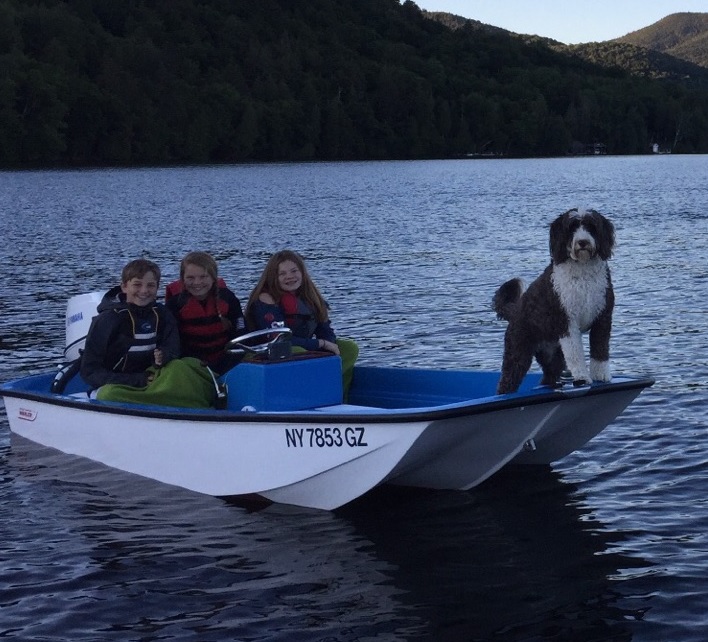 by Brad Rhine member of the Adirondack chapter

While growing up spending summers on Lake Placid, learning how to care for and drive a boat became a rite of passage, with the size and horsepower being age appropriate. For this reason, when our three kids became of age to pass their boater safety course, I began the hunt for a small, fun, and safe boat that they could call their own.

In searching various websites as I attempted to find the boat, I stumbled upon this beautifully restored and slightly modified 1962 13’ Boston Whaler in South Carolina. After watching the Whaler on EBAY for a week, I placed my first bid. As the days passed, and the bidding process was winding down, I became even more attached to this little boat. The only problem was trying to find a way to get it from Charleston, SC to Lake Placid, NY. That’s when I decided to try and get in touch with the seller, and I’m glad I did as that is when the story came alive.

It turned out that the current owner was also the original owner! He shared fond memories of his childhood enjoying the Whaler on the waters around Charleston. Eventually, the boat made its way to a storage barn.

Fast forward 40 some years, the owner was working as a boat builder and decided to pull his childhood boat out of storage and restore her. In doing so, most noticeably he removed the two wooden bench seats and starboard driving console. In its place, went a rear casting platform and center console much more akin to a flats boat that reminded me of a ’92 Hewes Bone fisher I had loved and sold when moving from CT to CO years ago. We agreed on price, and the seller agreed to drive it up to Lake Placid.

That 1962 Whaler was affectionately named Lil’ Boat by my son Brooks and now holds a dear place in our family.