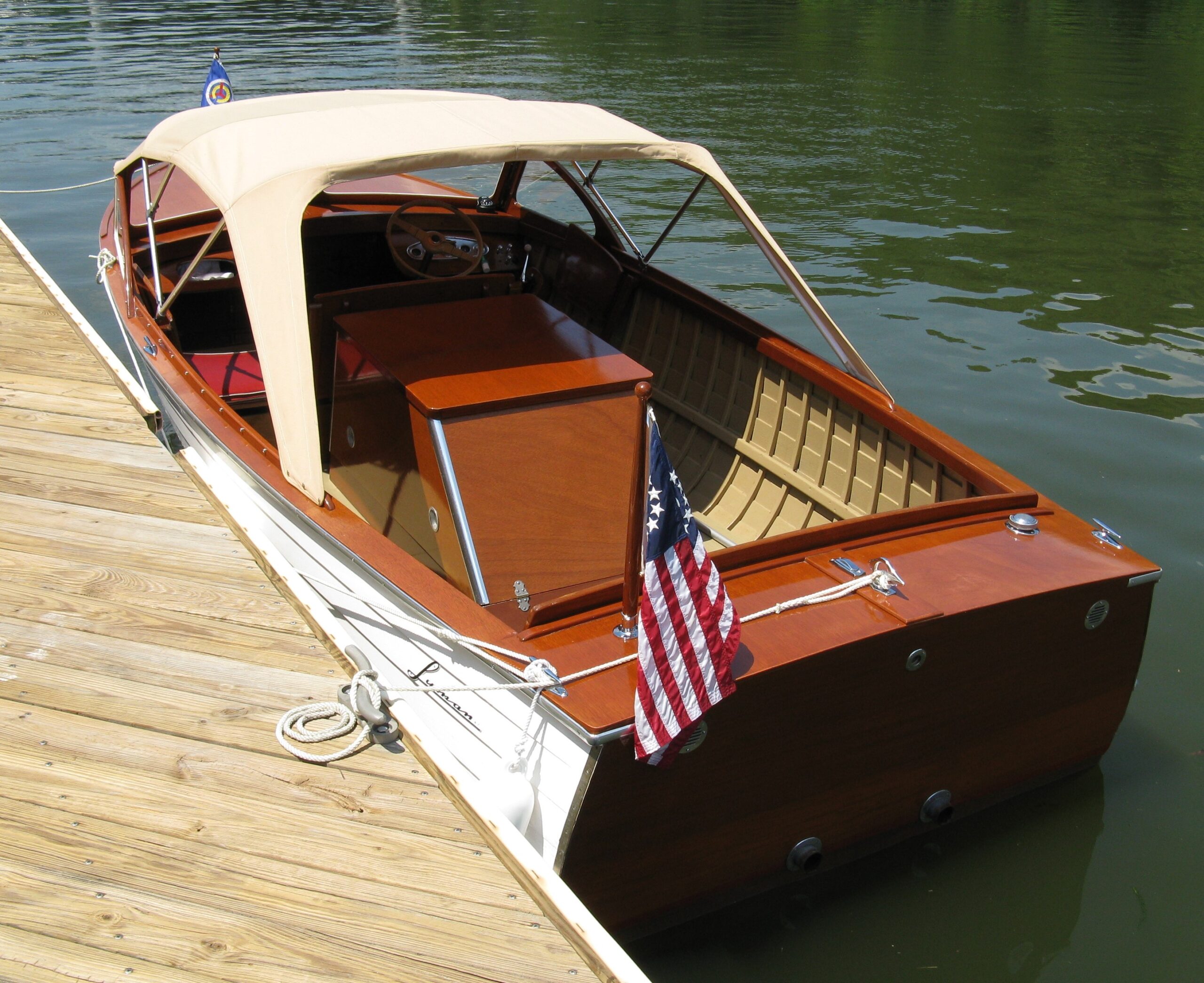 by Jay Wilmeth member of ACBS

Saw an ad for this beautiful nineteen-footer for sale in up-state New York. I already had two Lyman runabouts in storage in central Pennsylvania, but this one had it all! Late ‘50s model, recently re-furbished in and out, a Ford Crusader V-8, new canvas, gorgeous brightwork , and a hefty trailer. Why not?

We set out with high hopes of finding a beauty, and we weren’t disappointed. Just about 350 miles from Centreville, Virginia, we found ourselves in the town of Penn Yan near the shores of Keuka Lake, just about in the middle of the Finger Lakes region of New York. A lovely couple showed us this beauty, took us for a ride (sea trial), and ultimately waved goodbye as we drove off with this beauty in tow.

I’ve been associated with Lyman runabouts since 1972. I lived in Toledo at the time where I bought my first one. I have in-laws and good friends all along the shores of Lake Erie and Lymans are everywhere! I bought two other runabouts at the Clayton boat shows in the early 1990’s. I couldn’t seem to get my fill.

Once back in Virginia, we’d do half of the pre-launch in the driveway at home and the remainder at the launch site; it was always a thrill to “show her off” as we backed her down the ramp. Folks would just stand around and tell me how their grandpa had a boat “just like this one”.

One of our favorite launch sites was the Regional Park on the Occoquan River (a small tributary of the Potomac River near George Washington’s home at Mount Vernon. The Occoquan is the terminal portion of Bull Run Creek (yes, that Bull Run). It was a quiet and serene short ride to the wide Potomac where we’d head up-river and enjoy cruising by the majestic monuments of the nation’s capital and stop for lunch at restaurants on the Georgetown waterfront.

Always exciting were the frequent excursions to the Chesapeake Yacht Club (CYC) on the West River, a tributary of the Chesapeake Bay just below Annapolis, Maryland. As members of CYC, we’d bring Lil’ Girl over for the weekend and cruise the beautiful waters of the Chesapeake. She was the only Classic Wooden Boat for many miles around and she became quite the attraction.

I can’t tell you how many times discussions with on-lookers and well-wishers would eventually include, “but gee, isn’t the upkeep on that boat extensive and time consuming?” “Yep”, I’d proudly reply. “But that’s why I bought her. I can ‘go boating’ all year long, even in the cold of winter”. “How?” They’d ask. With a twinkle in my eye I’d tease, “I’ll be sanding, grinding, polishing, cleaning, and doing all kinds tinkering – in my garage, but I’ll be boating!” For ‘tis written, “Believe me, my young friend, there is nothing – absolutely nothing – half so much worth doing as simply messing about in wooden boats”. Someone once said!*

*With apologies to Kenneth Grahame, The Wind in the Willows, June 15, 1908