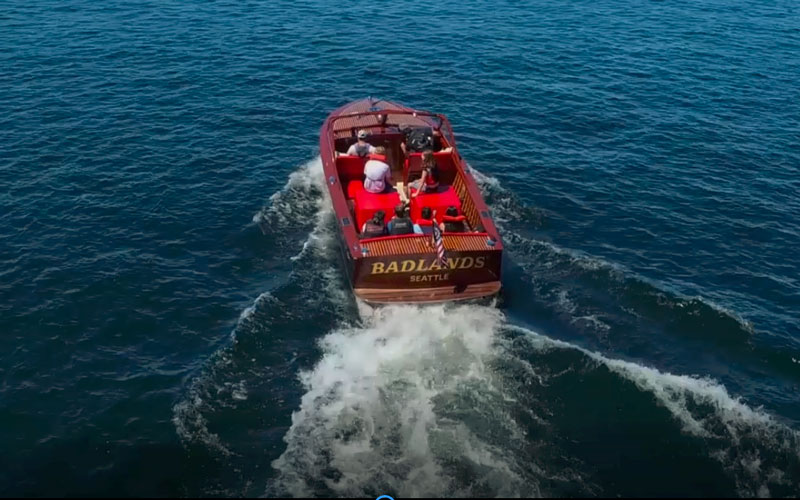 The Pacific Northwest Chapter of the ACBS FINALLY had a boat show in Seattle! Yes, we are known as “The Boating Capital of the World”, but guess what folks! We have no, as in none, nowhere, an empty marina, a park, or enough dock space anywhere to have a boat show in fresh water in or around Seattle.

However, in conjunction with the city of Renton, at the south end of 22 mile long Lake Washington, they have Gene Coulon Memorial Park with a great enclosed water space, a big long pier for walking (no moorage) and with proper authority and a lot of planning, we had a couple boat shows there in 1999-2001. However, with the advent of 9/11, we were declared a security risk, and further permission was denied. 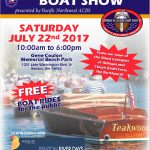 Until one of our members, Karl Hoffman decided to retire and take on the task of working with the city to get that permission back. It only took a year! We were then, and are now, included as part of Renton River Days.

Karl and his committee worked hard to bring it all together, and did a great job! For our first show, we had almost 30 boats!.

We kept it simple, a one-day, 10am-5pm non-judged show, with the exception of Skipper’s Choice, People’s Choice, Ladies Choice, Kids Choice; and a BBQ at the end of the day. We were fortunate to have great weather, with lots of folks getting sunburned.

Chairman Karl Hoffman went to the Northwest Marine Trade Association, asking for some sponsorship. We were also able to get about 50 kids life preservers (PFDs) from Fisheries Supply, a fixture in Seattle since 1928.

We are pretty sure that “No Hat” Pat (Kelly) gave the most rides, in his 1956 16′ Century Resorter “Shangri-la”. What a sunburn that Irish lad had! Perhaps that is why Pat won the “Peoples Choice” Award! 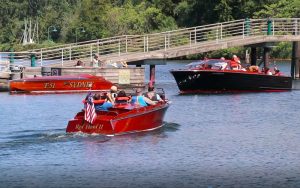 Rob DaPron’s “Red Head II” in the foreground, a 1928 24′ Chris Craft Model 3. “Miss Sydney ” and “Badlands” in the background. Steve Snider gets the unofficial award for “most riders”, he could get at least 10 in “Badlands”. 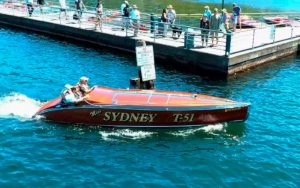 Here is Curt Erickson who should win an award for the ” fewest riders ” at a time in “Miss Sydney”, in his 2002 Dewhurst Gentlemans Raceboat.

Here is Don Palmer, loading up his 1957 21′ Chris Craft Continental “Analog”. Note that everyone is in their PFD’s .

Others volunteering their boats and time were Rob DaPron in “Red Head II”, Scott and Patty Mason in “Rhubarb”, Brian Flaherty with his 1969 17′ Chris Craft Fiberglassic Ski Boat “Tupperware” won “Kids Choice”, “Jezebel” a 1955 24′ Greavette Streamliner won “Women’s Choice”  Almost all of the participants gave rides throughout the day. I wish I had all the names of all the members who helped with PFDs and load and unload people, they were amazing.

All of these photos are credited to Kyle Huber, an ambitious young man, going to college, who has a business detailing cars (how I met him) and working with video photography and drones.  (Kyle Huber, Filmmaker, Writer, Student [email protected] )

Ron Stevenson concludes, “We consider this boat show a HUGE success as part of the ACBS mission in contacting the public, with so many free rides given to people, most who had never been in a boat before, and giving away kids PFD’s. We will do it again next year!”

Thank you, Ron Stevenson, for submitting the story and pictures.

Have you sent in a picture with a caption for the Tuesday Tour of Vintage Boats?  Share your passion.
You may submit your pictures and boat or boating stories through this website or email to [email protected].