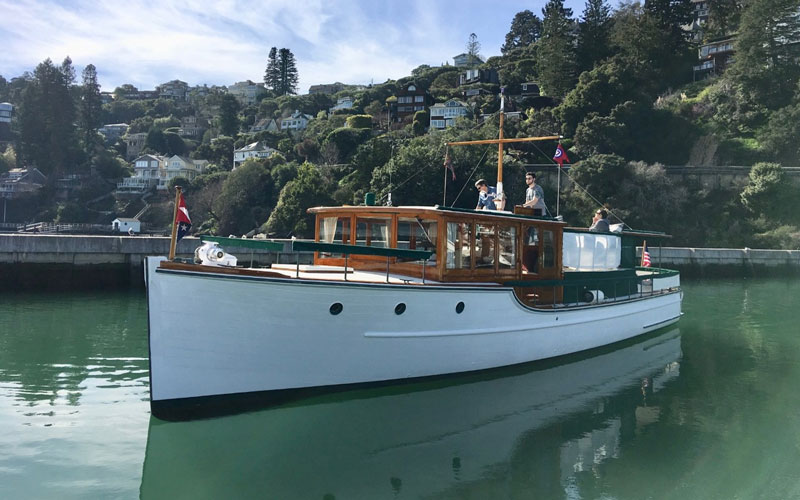 Pat Pending was launched at the Lake Union Dry Docks in Seattle, Washington in 1929. 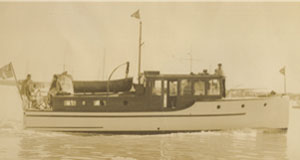 The original owner, Lloyd Bacon, was a Hollywood director who named the boat Lightnin’ in honor of his father Frank Bacon, writer and performer of the Broadway stage hit of the same name.  Lloyd Bacon directed for Warner Brothers such famous films as Moby Dick starring John Barrymore, the Busby Berkeley musical 42nd Street, Knute Rockne, All American with Ronald Reagen, Action in the North Atlantic starring Humphrey Bogart, and Frisco Kid starring James Cagney.  No doubt many Hollywood luminaries spent time aboard the boat as guests of Mr. Bacon.  Mr. Bacon’s daughter recalls sitting in the cockpit of Lightnin’ listening to Bing Crosby sing and tell jokes. 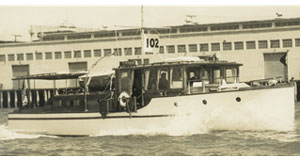 Originally 44′ 3″ in length, Mr. Bacon had the yacht lengthened to its present 50’ in 1930.  Mr. Bacon enjoyed long distance predicted log racing and entered the boat in a race from Long Beach to San Francisco in 1931.  He thought he had won the race but was disqualified on a technicality. Out of frustration, he sold the boat in San Francisco. The boat subsequently went through two owners before being purchased by Don Owen on October 12, 1940.  The Owen family was able to enjoy their new boat for little more than one year before the U.S. Navy requisitioned Pat Pending for submarine net patrol on San Francisco Bay. 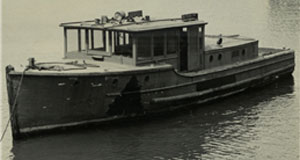 From December 9, 1941 to July 1944 Pat Pending was stationed at the submarine net depot on the Tiburon peninsula (California City).  Pat Pending’s responsibility was to patrol the cable nets strung across the Bay entrance to prevent enemy submarines from entering the Bay. The boat was painted Navy gray outside and ugly green inside, and outfitted with a deck gun on the bow and depth charges on the middle deck. 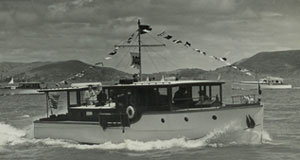 Don Owen bought the boat back from the Navy for $100 and invested over $26,000 in her restoration.  Since that time four generations of the Owen family have enjoyed summer trips to the San Joaquin Delta, cruises on the Bay entertaining friends, dignitaries and business associates, participating in fundraisers, and sharing the joys of a classic wooden yacht.

In June 1997, Pat Pending was found five feet down in the bow, and about ready to settle to the bottom of the Bay in her berth at the San Francisco Yacht Club in Belvedere.  Emergency crews pumped out the water and the very sick boat was towed to Sausalito.  Hauled out on one of two remaining MarinShip World War II Rail Ways at the Richardson Bay Boatworks, Pat Pending underwent a 3 1/2 year reconstruction project.  By the time the boat was relaunched in October 2000 she had all new frames, planks, and decks, new electrical systems and plumbing, and a redesigned interior.  A new Crusader “Captain’s Choice” 8.1 litre 8 cylinder gas engine was installed in 2001, replacing the 6 cylinder twin ignition Hall-Scott Invader that had powered Pat Pending for seventy-two years. 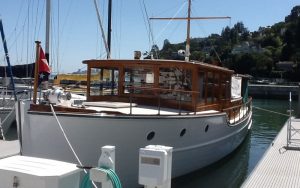 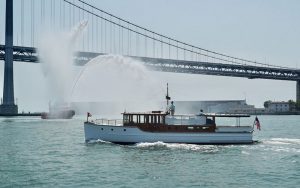 Pat has been in the same berth at the San Francisco Yacht Club for the past 61 years.  The family took her out last Sunday on a spring like day in Belvedere.

Thank you, Mel Owen, for this interesting history and thank you to the Owen Family for preserving this beautiful boat.

What is your boat’s story?