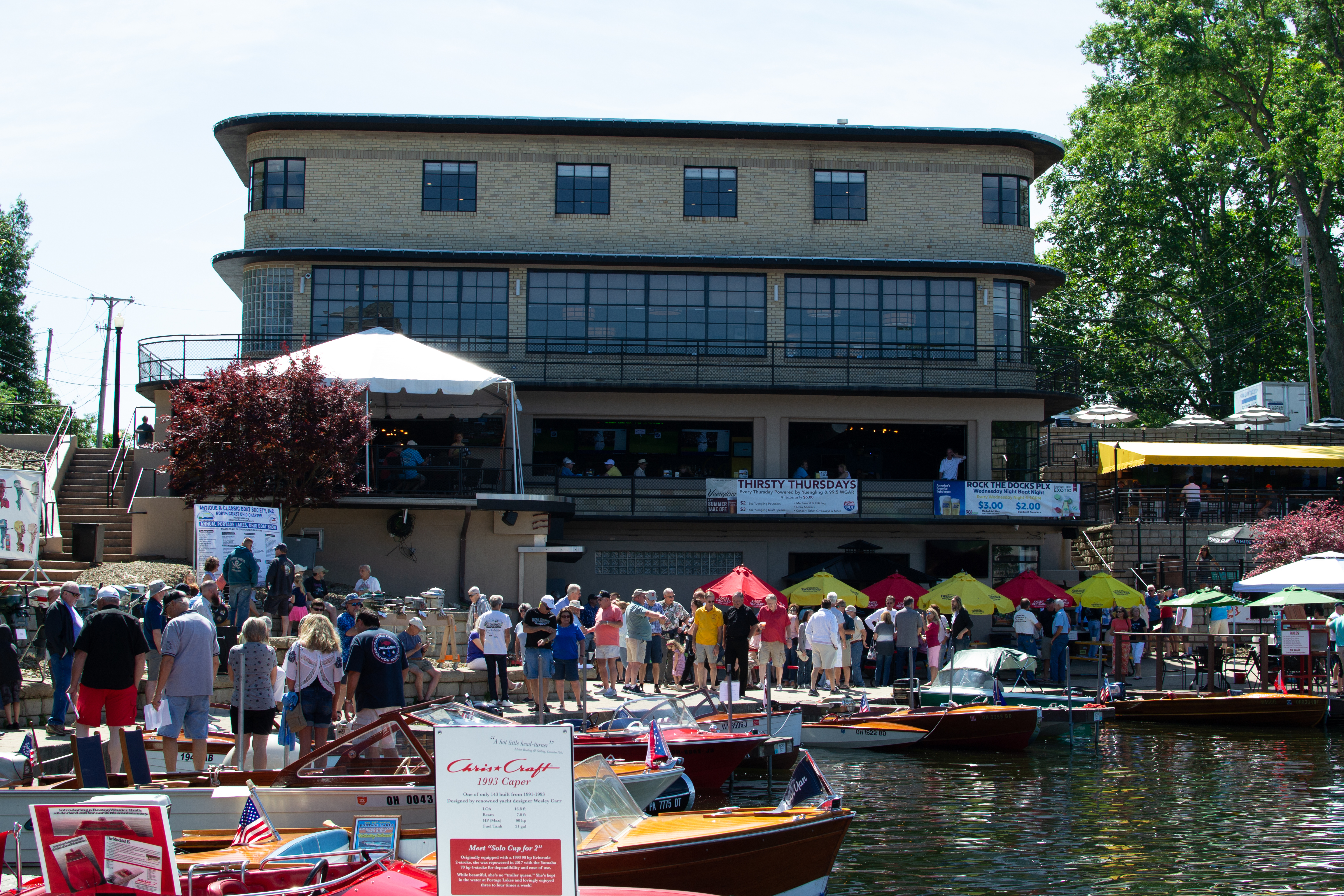 On Saturday, June 22nd, the annual Portage Lakes Boat Show took place on the docks of two restaurants; The Harbor Front Grille and Picks PLX for the 44th time. This show started as a prelude to the 4th of July fireworks on the Portage Lakes and was billed as the Antique Boat Parade. As the popularity of the event grew and people wanted to view the boats up close, organizers decided to make it a formal show. Early on, the show was organized and sponsored by the Portage Lakes Historical Society.

As the popularity of the show grew, more and more boats from around the region attended. Eventually the Historical Society asked the local chapter of the Antique & Classic Boat Society (ACBS) to help with the organization, publicity, show management and judging. The chapter, North Coast Ohio ACBS, has been managing the show ever since. The show is now co-sponsored by the North Coast Ohio Chapter of ACBS and the Portage Lakes Historical Society.

This year the show was managed by chairman Gil Maringer assisted by many of the chapter’s members. There are many volunteers working long hours behind the scenes to make this show a success; organizing sponsors, recruiting participants, all the administration, T-shirt and poster sales, coordination with site owners, media and advertising, parking, launching, awards, etc. Successful shows like this one do not happen without many dedicated people.

Now the show attracts boats and owners from surrounding states and fills the 55-plus docks of the two restaurants, includes many land displays and a “field of dreams” lot with boats for sale. This year was no exception. There were over 50 boats of all types there from; Ohio, Pennsylvania, New York and Kentucky.
This year’s theme was the “Year of the Outboards” and attracted some unusual craft from the 1950’s through the present day. The Western Reserve Chapter of the Antique Outboard Motor Club, Inc., (AOMCI) joined the show as special guests. They brought several motors from all era plus some mounted to boats that joined in the judging during the show. These motors, both mounted and unmounted added to the interest at the show and many conversations by visitors could be heard with AOMCI members about days gone by when they had one of those motors.

There were six “youth Judges” at the show from the area judging several boats and awarding three trophies using a modified ACBS judging system.
The weather could not have been better and attracted a record crowd of attendees. After the show and enjoyment of the participants cruising the lakes, an awards dinner was held at the Turkeyfoot Island Club. It was a great day for the 44th annual show and a beautiful evening at the Island Club for dinner and awards. Plans are already in the works for next year’s show, sure to be another hit at the Portage Lakes.