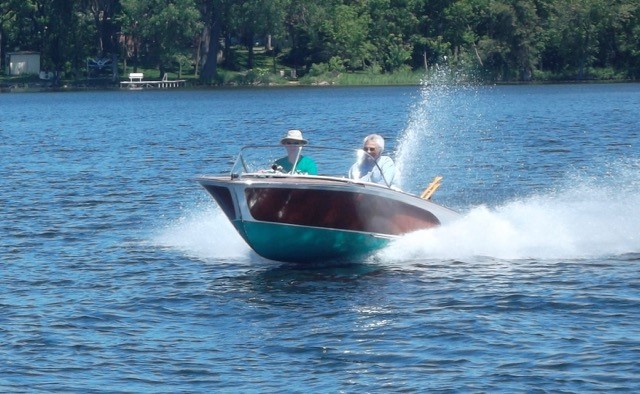 This classic one-of-a-kind 16-foot ski boat, was custom built in 1960 by Douglas Marine Co. Douglas Marine Co. was in business in the late 1950s and early 60s building custom boats in Milwaukee, WI. A retired GM engineer owned and operated the company. This boat is powered by a Buick 215 V8 ( small block ) engine with a 155hp rating. The motor was rebuilt in 2018.The original outdrive was a Western Gear. Because of performance issues, the outdrive was replaced with a Muncie Gear Works in 1974.

After spending 30 years in a barn, at which point the deck was in dire need of refinishing, but the interior pristine,( excluding the dirt ), the boat was removed from the barn. The next 8 years were hard on the old girl, being shifted from inside storage to outside storage.

Finally after many years of trying to buy this boat from the original owner, he finally decided to let “ PRECIOUS “ go to a new home. Our friend was into building and racing cars on the big circuit and wanted this boat to reflect on his racing years. This is why there is such an expansive dash on this boat for it’s size and age.

Since then we have had many enjoyable hours and some not so, restoring the boat. We were able to replace the interior with the original colors, pattern and stitching. The Hosclaw trailer was the next project, and that is 95% complete.

One of our goals is to get PRECIOUS back on Cranberry Lake in Eagle River, WI. This is where she had taken her maiden cruise and was used to ski the Eagle River Chain of Lakes for many years of enjoyment