Preserving history one boat story at a time: Nellie Bly 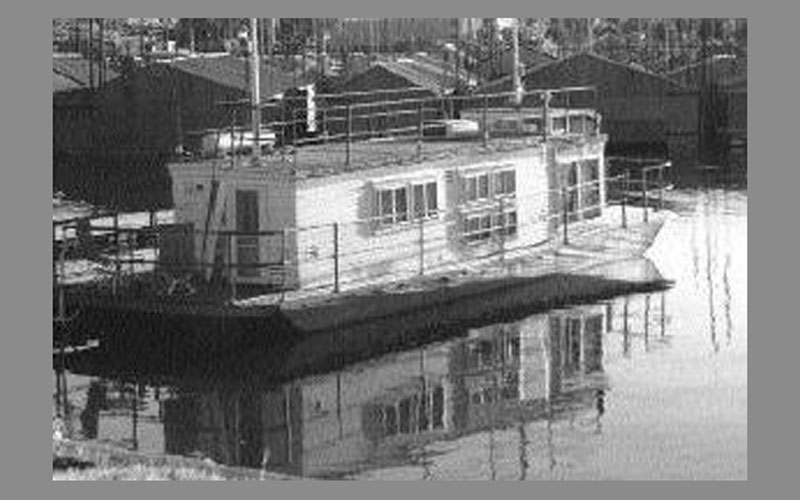 Preserving history one boat story at a time: Nellie Bly

The Nellie Bly story was first published in the fall 1998 Boathouse, publication of the Bob Speltz Land-O-Lakes Chapter of ACBS.  Excerpts from that story are shared here with permission from the chapter and John Vogel.

The Mississippi River has a rich and colorful history filled with stories of settlements, businesses, traders, trappers, loggers, and gambling. Regardless of the story, all have one commonality – boats – both commercial and personal. Original and still owner [at the time of the writing], Marjorie Gray Vogel of Red Wing, Minnesota graciously shared all kinds of information, pictures and the story, hand-written by Marjorie. – Boathouse Editor

The houseboat was commissioned by Stanley G. Gray of Edina to be built by local craftsmen in Red Wing, MN.

In the spring of 1936, a 42 foot houseboat was launched and christened. The craft was equipped with a Red Wing Thorobred Hiawatha 100 hp inboard motor by Tom Collishan, Red Wing Motor Co.

In June of that year, Mr. Gray turned over ownership to his daughter Marjorie and son-in-law, Arnold Vogel as a wedding present. The newly-weds used the Nellie Bly for their first home and they honeymooned for two seasons in and around the environs of the Mississippi River at Red Wing until the fall of 1937. After purchasing a home in Red Wing, the Vogels continued to dock the Nellie Bly in the lower bay harbor where it can be found today. Since 1938, it has been used as a home away from home by all members of the growing family: Stanley, Mary, George, and John. 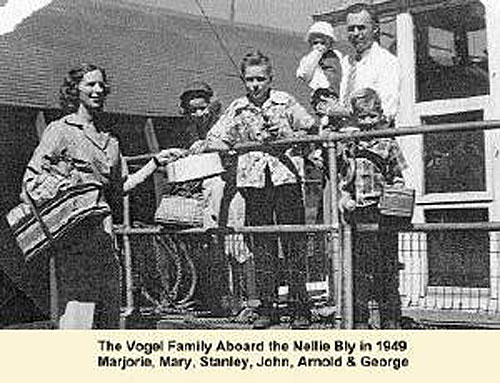 Marjorie acted as hostess for visitors to the Nellie Bly at the 23rd Annual Bob Speltz Land-O-Lakes Antique and Classic Boat Rendezvous held at Treasure Island Marina in Red Wing in August of 1998. A total of 825 people toured the interior of the antique wooden river houseboat during the three-day event. The pilot, John W. Vogel of Minnetonka welcomed all aboard.

Minor maintenance and interior design changes had occurred over the past 50 years on the 62 year old boat in 1995, yet the original boat has remained basically intact. With the engine located forward in the wheelhouse, a 32 foot shaft carries to the stern an arrangement providing better aft storage. A major decision was reached to replace the original Georgian Cypress wooden hull with a hull of steel. This allowed welders to also extend the aft deck by three feet.

Under John Vogel’s supervision, the restoration included complete paint and varnish treatment inside and out. At that time, it was expedient to replace the original Thorobred Hiawatha 100 hp engine with a 160 hp Mercruiser. The original 60-year-old motor is now part of the celebrated display of antique and classic inboard engines shown throughout the Midwest on a yearly basis at various boat shows by their owner, Harry Munson of Red Wing.

How far has the Nellie Bly traveled?
Destinations included head of navigation in Minneapolis, the upper St. Croix River, and a Jaycee Convention in Winona. Around Red Wing we would drop anchor in the back channel, head of Lake Pepin; in cuts one, two, three and four; Little River; Sturgeon Lake; off Barney Seiz Point, and in the lock/dam flowage channel.

And now?
After 1974, we acquired 600 feet of beach up river from Red Wing which we now use as our base of activity. A generator is housed there and provides the electricity for the Nellie Bly. No longer is there a pair of stern davits and a dinghy. Instead we use a 17 foot Whaler as a taxi between the harbor and the Nellie Bly. Communication is by cell phones, not marine radio.

Storage in Winter?
Since 1996, the houseboat is pulled in October and stored by Marine Specialties of Red Wing until launch time in May when the boat is docked in Vogel Harbor for another season cruising the Mississippi at 1200 rpm.

Out of the blue, we decided on Nellie Bly. Somehow or other it sounded like a horse, a pet, or perhaps a toy, like a boat. So, the boat was named on impulse.

So, who was “Nellie Bly” and how did that name come into our minds? It was not until later that we received clues from friends or strangers who sent clippings to us. Actually, Nellie Bly was an assumed name for an American who became the most famous woman newspaper reporter of her time…which is another interesting piece of history found by clicking here.

Thank you, John Vogel. He reports that his mother Margery Vogel died in October 2014 just short of her 103rd birthday.

Share the story of your boat. Email pictures and stories to [email protected].