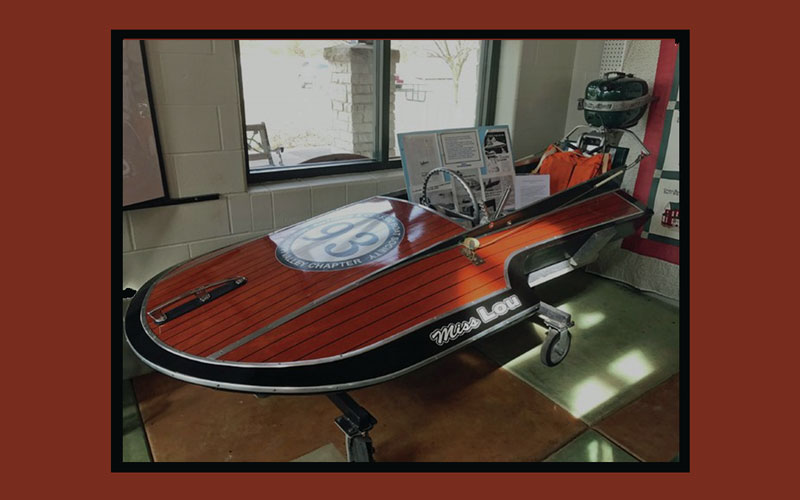 Pumpkin seems to be the flavor of the season – but have you heard of Pumpkin Seed Boats?

Dan Peggs, President of the Mississippi Valley Chapter of ACBS, shared this interesting article about Pumpkin Seed Boats.  The article first appeared in “The Telegraph” newspaper of Alton, Illinois.  This article is republished here with permission from journalist Vicki Bennington and editor Jill Moon.

By Vicki Bennington – For The Telegraph      POSTED ON FEBRUARY 21, 2017 BY ALTON TELEGRAPH

A “pumpkin seed boat,” a three-point hydroplane, owned by Tom and Lou Lenkman, of Grafton, was restored by volunteers at the Mississippi Valley Chapter of the Antique Classic Boat Society as a club project.

Pumpkin seed boats, or three-point hydroplanes, a short-lived, but thrilling ride, raced along the river, mostly in the mid-20th century — but one has crashed a modern river town.

Grafton resident Tom Lenkman and his wife, Lou, discovered a vintage ‘pumpkin seed’ craft washed up along a dock near their St. Charles, Missouri home years before moving to the Metro East. The vessel was amongst debris from the Great Flood of 1993.

The boat spent the next 14 years hanging from rafters, but found a way back into the public eye starting in October 2007. Tom Lenkman and other members of the Mississippi Valley Chapter of the Antique Classic Boat Society volunteered to restore the boat. Now the vintage vessel, fully restored, is on loan to the Grafton Visitor Center, so people can see a bit of the history of boat racing on the Illinois and Mississippi rivers.

Lenkman said the boat originally was in very poor condition requiring total refurbishment, but all hardware — including the Mercury Mark 20H outboard motor on the now refurbished boat — was with it when it was rescued.

Kits to build pumpkin seed boats still can be purchased, but in the 1950s and 1960s, the vessels were quite common.

“It was kind of a ‘poor man’s sport,’ because you could get into it for a relatively small amount of money,” Lenkman said. “People could buy them at a reasonable price, build them in the garage, buy a motor and you were set.”

About eight-feet long, the boats could also be dangerous — and physically taxing — as the boats raced up and down the river at speeds of 50 to 60 mph with the driver on his knees.

Lenkman said it was almost exclusively a “man’s sport,” perhaps because of the physical requirements and strength.

“After we restored it, we exhibited it at various boat shows,” he said.

The Lenkmans, who are avid boaters, moved to Grafton a few years ago for its ambiance and activities. That’s when they came up with the idea of loaning the boat to the Grafton Visitor Center.

The exhibit also includes pictures and articles from old boating magazines, but Lenkman said, unfortunately, as popular as the boats once were, the topic almost has disappeared.

President of the Grafton Historical Society Ed Amburg, also a former city alderman, said boys usually had a pumpkin seed boat before they had their driver’s license.

Most of the boats sported a Mercury 10H outboard motor, or maybe a 5-1/2 H Johnson, Amburg recalled.

“They were fast, and there wasn’t much boat there,” he said. “And, if a little wave came along, you could sink. But I never knew of anybody who was badly hurt.”

The exciting sport started along the rivers not long after World War II ended.

Crowds of up to 3,000 people visited Grafton to watch the races on the weekends when local boys and men owned and raced the fast boats.

As Lenkman said, the boats faded away, lasting no more than four or five years.

“We’re really happy to have it on display at the visitor’s center — to help people remember,” he noted.