Putting the Engine Before the Boat 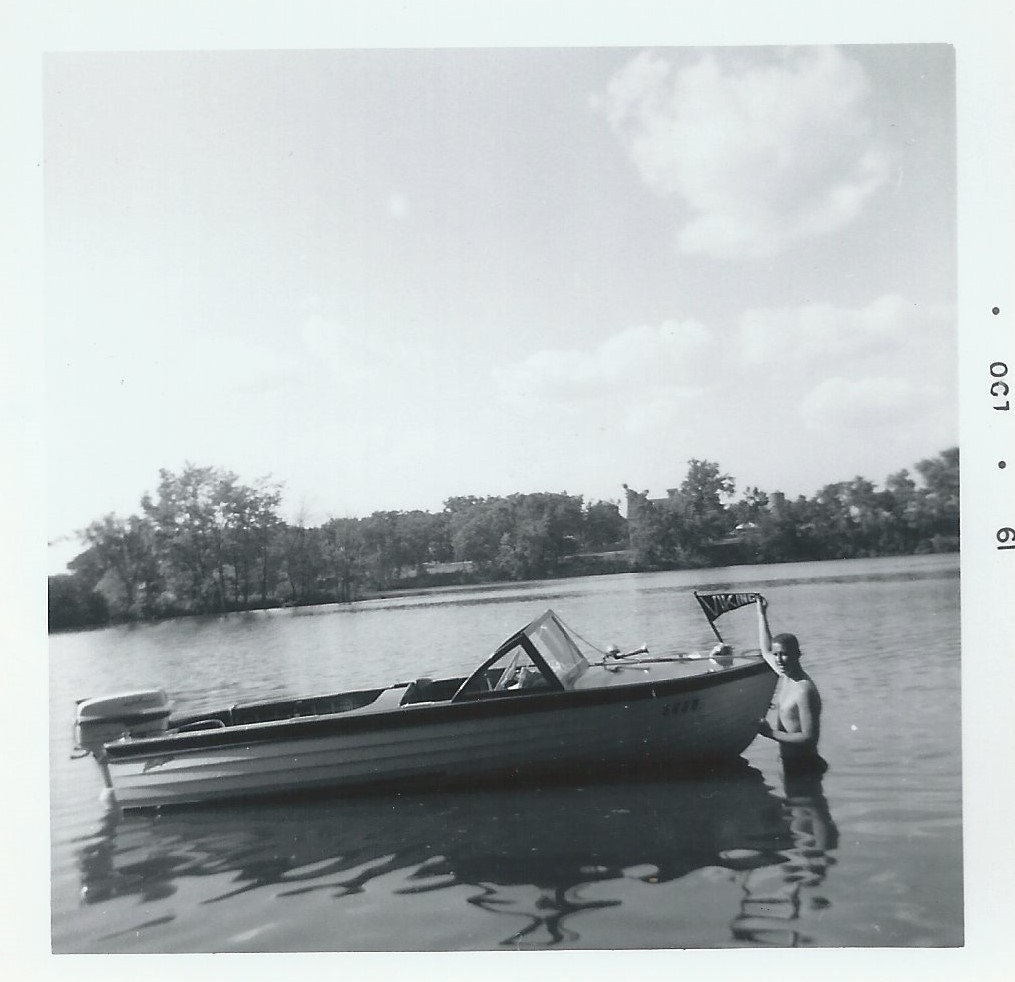 My 1958 Thompson Sea Coaster is special to me because my father, who has now passed on, purchased the boat new from the Grueben Brothers boat dealership in Waverly Iowa in 1959. He had friends that boated on the Cedar River that travels through the town and he wanted to get a boat of his own. He was single and in his early twenties. He could not afford to buy the boat and engine at the same time, and he really liked the 35hp Super Sea Horse Johnson at the dealer, so he bought the engine in 1958 and kept it on a stand in his bedroom of his parents house where he was staying. He saved his money over the winter and bought the boat in the spring of 1959. He said his mother was glad when he finally bought the boat because now she no longer had to dust and clean around the engine in the house. The black and white photo is my dad, Jim, with the boat on the banks of the Cedar River. The time it took my dad to buy the boat also gave his dad, my grandfather, the time to make a boat trailer out of scraps from the junk yard. I have pictures of him walking the partially made trailer down the street to the welding shop. It has stood the test of time and can still be used today, although I have traded out the old car leaf springs and rollers made from old washing machine wringer rollers for new springs and rollers.

Our family used it every year, however we moved to Waterloo and my dad bought a 1969 Chevy pick up and put a camper on it so we could camp at Clear Lake Iowa and use the boat on the lake. I remember even in the late sixties when we would use the boat at Clear Lake how many people would come to look at the boat and admire it. My dad was not a fanatic about taking care of anything except the boat.

In the seventies we moved to Chisholm Minnesota where after a year my parents bought a half finished cabin on Little Bear Lake. This was a very remote lake with only about a dozen cabins and no electricity. We also had the biggest boat and motor on the lake. We turned the lake into our personal ski lake, each summer friends from Iowa or relatives from Minnesota or the Dakotas would come for a great time. About this time though we began to realize the 35 hp Johnson just wasn’t enough so my dad bought a used 1968 55hp Evinrude “Triumph” to put on the Thompson. My dad was not mechanical at all and he did not realize the Evinrude was a long shaft and not a short shaft like the 35. To solve the problem, I at age 16 built up the transom and we hung the engine on. It was an excellent match for the boat.

The boat last saw water in 1989, by this time the ribs were rotting and the boat needed work. In 1998 my dad said I could have the boat if I thought I could fix it. We did not know how far gone it was. I did seek a professional boat restorers estimate but chose to see if I could learn how to restore it myself. I had always dreamed of some day having the boat and I like to work with wood and fix things so this seemed like it was meant to be.

I joined the ACBS, Bob Speltz Land-O-Lakes chapter, and began going to the workshops that were offered. I learned how to make a steam chamber and how to bend wood. I also met people like Andreas Ruhde, who owned and had restored Thompson boats. I learned where I could buy supplies that I would need, and so I gained enough courage to start taking the boat apart. The ribs were so bad, they just crumbled when I removed them. The hardest part to figure out was how to bend each rib to its own unique shape. Eventually I thought of a way to make a jig out of plywood with slots in it that would have sliding bolted blocks of wood to clamp the steamed ribs to so they could dry. I have half of the boat done, along with new inner and outer keels. My goal is to finish the boat this summer, but I have said that before.