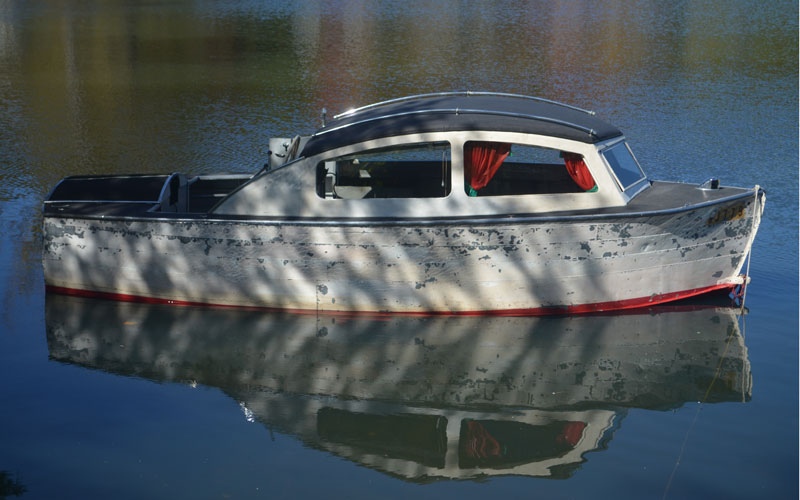 Mystery Girl, when found after being in hiding since 1961, brought Scot Marechaux and Lois Bulger to membership in ACBS and the Finger Lakes Chapter.  Scot is sharing this story and inviting you to share any additional information you might have about the boat.

She is a unique cabin cruiser boat built circa 1950 in East Aurora, New York by inventor James Louis Crook. This is a combined cabin cruiser, trailer and light freight trailer vessel patented by the United States Patent Office on 15 August 1950.

This boat vessel was the brainchild of James Louis Crook, of East Aurora, New York. As World War II came to a close, America’s steel industry had experienced an unprecedented demand to produce steel for the war, and Mr. Crook, realizing their efforts, sought to find new products that might take advantage of the use of steel materials as the war came to a close (WWII officially came to a close in August 1945). Thus, he invented a boat of modest size that could be transported by average Americans from place to place.

This is the only known photo of the original prototype for this boat. It includes James Louis Crook, and one of his two financiers, George R. Sedita. 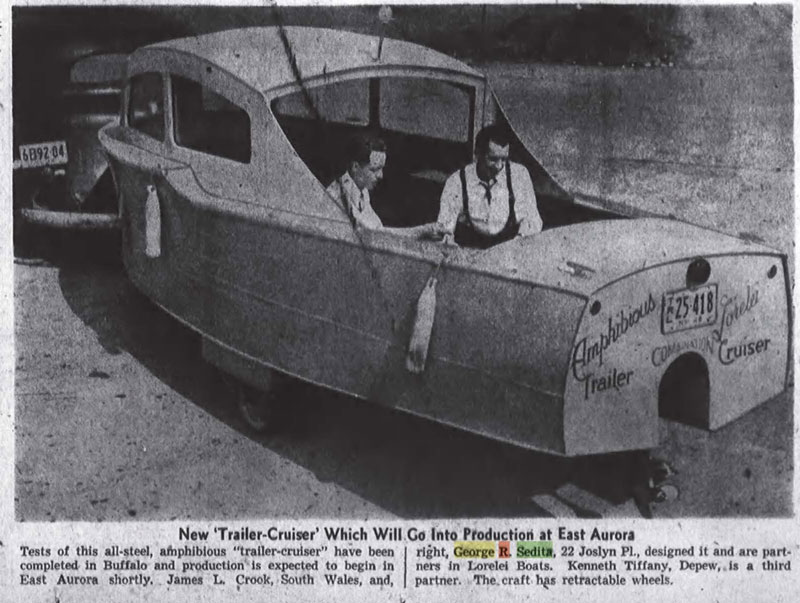 The picture above is taken from page 26 of the July 3, 1946 edition of the Buffalo Evening News.

Take time to view the videos of Mystery Girl that Scot has put on YouTube.  It’s worth your time to be amazed by the ingenuity of engineering on this amphibious boat.

Below is a compilation of specifications for the prototype steel hulled cabin cruiser invented by Mr. Crook that is in my possession (please note that it is my understanding that the version under my ownership is one that was manufactured after the original prototype shown in the picture above):

Boat registration # 9J779
Trailer license plate on rear of boat is New York Trailer # 94 – 417 year 1960 – 61
We could not find any manufacturer’s name on it.
Length is 16′ 8”
Hull materials: galvanized steel hull riveted over steel skeleton of formed ribs.
Roof is made of 2” oak strips spaced over steel ribs with a burlap type padding cover with a rubberized landau type top.
It has small (6’W x8’L x 4’H) cabin accessed through a folding door. Inside is a steel frame bed with original mattress.
The boat is on a permanent trailer/frame.
It takes a 1 7/8 ball which is located on the front for you to hook your hitch up.
The pair of wheels are retractable. When the boat is in the water you release a clasp, pull up on a cable and the wheels rise up inside a compartment inside the cabin. When fully up there is a clasp you turn to hold them in place.
There are two door/flaps on the sides of the wheels that are spring loaded and cover the bottom of the boat for cruising.
The stern is a two door compartment to place the outboard motor in.
The transom for the outboard motor is recessed two feet into the hull creating a tunnel.
Motor that came with the boat is a 1953 “Evinrude” 25HP Big Twin
Included is a large canvass cover for the boat.
Also included with the boat is a 48″l x 24″w x 34″h wood supply box.
Inside there is a brand new “American LaFrance” Fire extinguisher. Rope, flares. 2 metal 5 gallon gas cans.
9 cans new/full “Texaco Outboard Motor Oil.” Extra props – new. Spare tire(new).
“Kooklite” two in one cooking lantern.
A new old stock box of Orange Adult Size, “Life Saving” Vests. Dated and Approved By U.S. Coast Guard, N.Y., N.Y. October 26, 1952 Made of eight pieces of flotation cork wrapped in a bright orange canvas with six canvas ties typical of Life Vests found aboard Ocean Liners — Made by “Atlantic Pacific Manufacturing Company, Brooklyn, New York.”
The Vest contains four pieces of cork measuring 11″tall x 5″wide x 2″thick and four pieces of cork measuring 6 1 /2″tall x 5″wide x 2″thick. Cork approval # A78. Vest overall measures when opened, 44″long x 11″tall x 2″deep. Weight 6 pounds.

Clues to the age of the boat are:

There is no end to the uniqueness of this boat.  THANK YOU, Scot, for preserving Mystery Girl and for sharing her with us.  Scot says, “I am not sure what to do with the boat and its accessories but I think it should be shown at some boat shows and end up in a museum. Any thoughts?