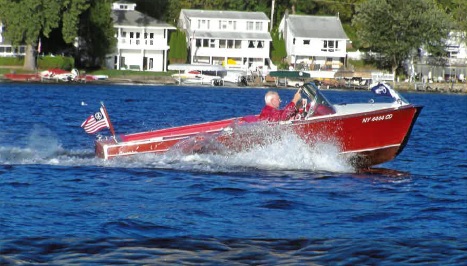 It all started in early November 1981 when I was driving down the West Lake Road on Conesus Lake in New York. Sitting on a cradle with a for sale sign, was a 17-foot Century Resorter needing a lot of work. There was no question the style was extravagant, the cutwater, bowplate, referred to also as the “Clipper Bow” caught my attention, I fell in love with it. This boat some day would be promising. The forward cockpit was attractive and very impressive. I knew blazing speed, directional tracking, and detailing were clearly the characteristics of a Century boat. Luxurious upholstery, smart styling, innovative features and choice of African mahogany were the consistent hallmarks of a Century boat. I purchased it.

In the summer of 2013 my son kick started me into restoring my boat that had been in storage for 28 years. We needed to do research and my son Michael did an excellent job. My wife Philomena was somewhat quiet about this venture, but approved it. Reviewing those specializing in restoration of antique and classic boats, it was not easy to determine who would do the best work restoring everything to original. Everything had to be considered; part availability, cost, workmanship quality, time and delivery.

In the process of reviewing / restoring we found the boat had a fire at the forward seat, upper frame-work area, and it would require a little extra work. All wiring would have to be replaced (color coded) throughout. An oil analysis was undertaken with Brad Penn and we found thrust wear (need to replace guides, valves etc.) A surprise was 72 parts per million sodium, which was caused by a residual anti-freeze leak with a engine flush in 1986 when I stored the boat with then a unknown head / block gasket leak.

I found many items were changed on this 17-foot Century Resorter. The engine box was raised about 2- 5/8 inches because of a higher carburetor on the engine. An original side intake Valley carburetor was found in New Jersey. I would not allow it to be shipped by motor freight. We drove there and picked it up. The heads were pulled and Drake Engines, Inc. install hardened valve seats, new valves, guides etc. to burn today’s fuel and rebuild the engine. We found an original rebuilt explosion proof generator in Michigan with CD’s Engine service. We found an original voltage regulator manufactured by Leece-Neville. This was like winning the lottery. All of the gauges were restored by Kocian Instruments in Wisconsin. We decided all of the chrome would be restored by Lakeside Custom Plating in Ohio. A beautiful chrome twin trumpeter horn on the deck had to go and an original huge black Spartan horn was found at A&A Marine, in Michigan. This horn was mounted under the deck that required a relay with 12 gauge braided wire to sound the horn. AA Marine also helped us find the ladies that did the upholstery sewing in 1960. They are in their 90’s today and still sewing and they also embossed the Century logo in the rear seat. The boat was entered in the 2015, 32nd Annual Century Show at Conneaut Lake, PA, and took the top award at the national show.

I wanted initially to name the boat after my wife Philomena. My wife always embraced a cordial reception, was very quiet, humble, and well spoken, who never wanted recognition for accomplishments. I lost her to cancer on December 18, 2014. She never saw the finished boat. In searching through the 2014 Antique and Classic Boat Society Directory, I found a name that was never registered before. When, I am on board now, you might say, I am honoring my wife’s spirit with the name, ” Welcome Aboard “.