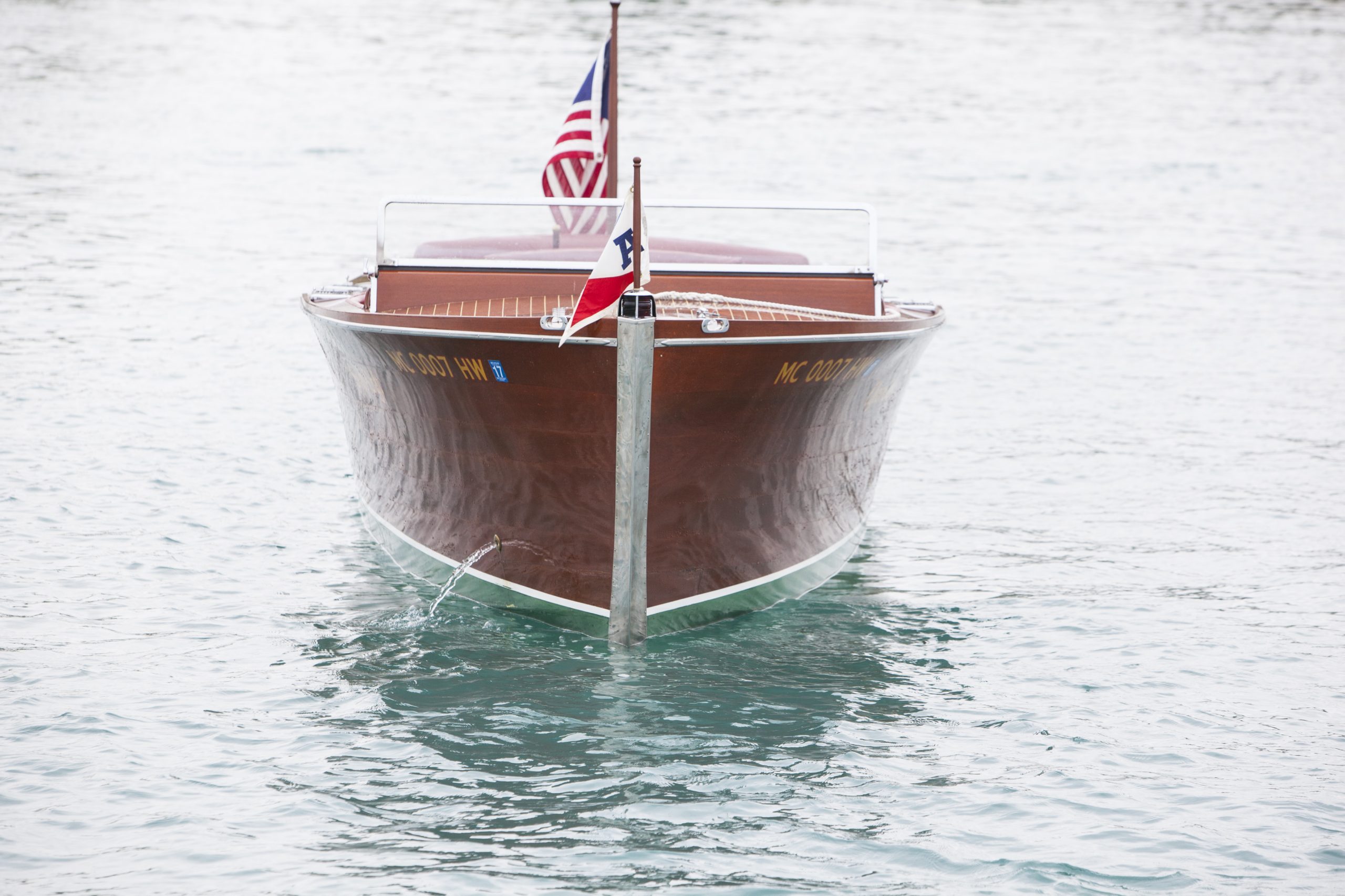 Molly-O has a direct connection to the descendants of Chris Smith as my grandfather, Milton Meier, was a friend of Owen Smith. In 1938 Owen asked him if he was interested in purchasing one if the seven 24-foot boats that were being built for family members. Apparently one of the family members changed his mind after the boat materials were ordered and the boats were not completed yet so this boat became available. Obviously my grandfather said yes.

She has a few unique options that were ordered from the factory.
• Under the front passenger seat is a “head”
• Under the center front seat is an “ice box”
• The center jump seat is also a copper lined live bait and fish box.
• Behind the engine box is a rear steering bar for steering while trolling.

My grandfather purchased this 1939 24.9-foot Deluxe Utility from Chris Craft on July 23,1938 and had the name Molly-O put on the transom before delivery. The CC employee that lettered the boat was Ed Posey.

All of my grandfather’s boats were named MOLLY-O after his wife whose name was Marie and her maiden name was McQuisten,very Irish. However, she always went by Molly. The “O” was a reference to her Irish heritage.

The boat was owned by two other (very local) families from 1960 thru 1978 and each one changed the name, FIN’S FOLLY and then WOOP’S HI. The boat was always kept on Grande Pointe Cut on Harsens Island, within sight of its old home in my grandfather’s boathouse, which later became my parents retirement home, and has now been home for us for 40 years.

We purchased her back in 1978 and began restoring her to her original condition. Much work was done to remove the previously added chrome grab bars and cup holders, redo the upholstery to its original red, locate the correct windshield and bow light, and generally bring the boat back to her original state.

During the restoration, we considered many names and settled on REFLECTIONS, alluding to the boat’s heritage and the light dancing off the varnish. I refused to name her MOLLY-O as, I’m sorry to say, she was not my favorite grandmother. I’ll leave it at that. So it came time to contact a person to letter the boat with REFLECTIONS, and a former CC employee, Tom Cuthbertson, recommended another former CC employee, Ed Posey, who was well into his 80’s. Ed came to the house one day to letter the boat in gold leaf, and we described the lettering that we wanted. He took one look at the boat and announced, “that’s MOLLY-O which I lettered at the plant in 1938″. He then went on to describe the original lettering style and colors and told us that he remembered every boat that he lettered. At that point we decided that fate was directing us and the name MOLLY-O would live on!

Since MOLLY-O lives in an enclosed boat house, we have been able to retain the Ed Posey work of art to this day.

When we bought her the original engine (CC LB) had been replaced and a search was conducted. We couldn’t even find someone that had ever even seen an LB, so we were forced to repower her with a 5.7 Mercury Marine.

Molly-O has never been a trailer queen, and has been enjoyed by 6 generations of our family.