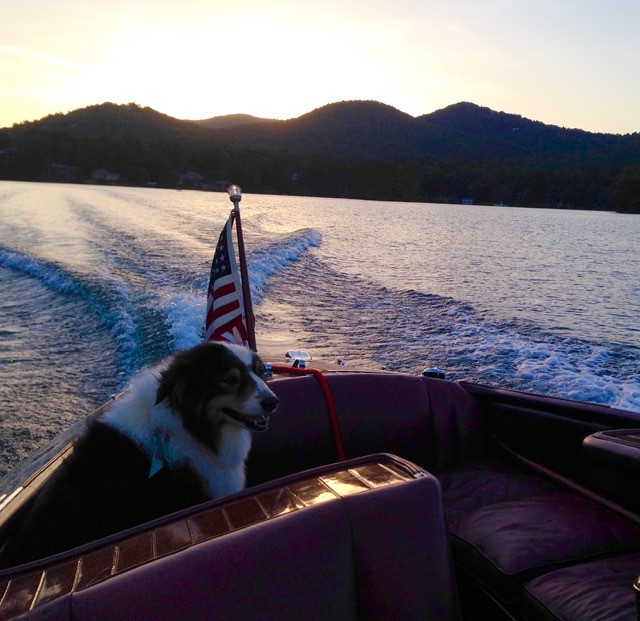 by Bob Voyles member of the Blue Ridge chapter

Remember When is a very special part of the Voyles family. Originally purchased from the factory in 1941 by a Chicago family and kept on Lake Michigan, this beautiful 22’6” Garwood Streamliner was restored in upstate New York and brought to Lake Rabun in the mid-1990s by local collector Chuck Wallace. When my oldest daughter Virginia was married on our family’s historic lakeside estate in 2005, Chuck graciously drove the getaway boat, then named Otter.

My wife Belle had said several times over the years, “That is the only wooden boat I will ever let you buy.” Its unique forward walk-through cockpit configuration, made possible by the then pioneering v-drive engine and transmission, allowed all of the 8 passengers to be seated comfortably forward of the engine, making it a prized model, perfect for cocktail cruising and entertaining. So after sitting in storage for seven years, in 2012, my wife and I were fortunate to purchase the Streamliner. Needless to say, that was a very expensive phone call!

The Garwood needed a fair amount of work, but by 2013, the original Chrysler Marine Six engine had been rebuilt, and a new bottom put on it, with the topside gently refinished. We decided to rename the boat, and gave our family the option of naming it either, The Summer of ’41 (my choice) or Remember When, named for our favorite Alan Jackson ballad. My family voted overwhelmingly for Remember When, and the boat was rechristened with a logo specially designed by my younger daughter Kelly.

For the last seven years, Remember When has become a summertime fixture on Lake Rabun, with its 1941 engine still purring as she did 79 years ago, providing ample power for our cocktail cruises around the lake. As one of only six original Streamliners remaining – three of which now reside on Lake Rabun – Remember When has also enjoyed the honor of leading the annual July 4th Lake Rabun Wooden Boat Parade which highlights many of the over 100 classic wooden boats on our lake, one of the largest collections in the southeastern U.S.