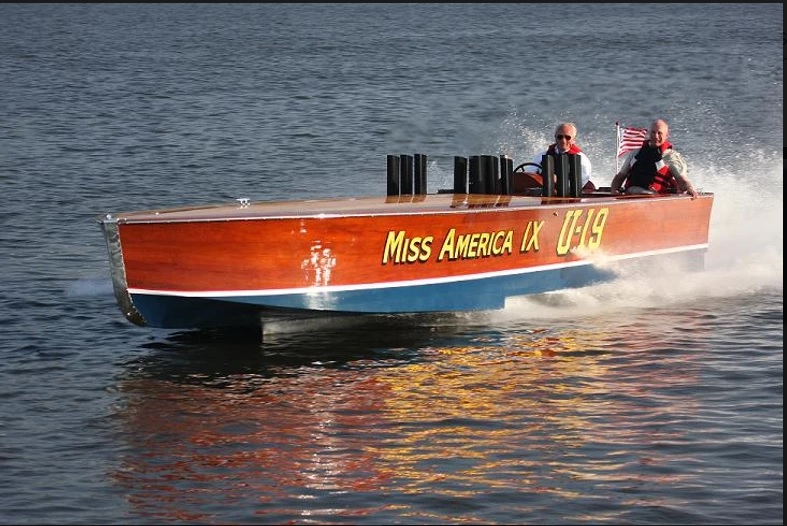 Note: Charles Mistele passed away in early March. A few weeks before his passing, Charles mailed a handwritten story to the ACBS office. We are pleased to publish this story in memory of Charles and his life long commitment as the caretaker of Miss America IX.

Gar Wood donated Miss America IX to the Algonac, Michigan, Lions Club in 1958. While passing thru Algonac in 1968, my dad and I saw her on a farm trailer with a sign advertising the Annual Pickeral Tournament. She was just a shell of her former racing days and the only thing left on her was the steering wheel, the bow rudder and the propeller struts. I found the Lions Club President and was told the boat would never be for sale. I left him with my business card in case that changed in the future.

The Lions Club called two years later as Chris-Craft had announced that the Algonac Factory would be closing and the storage space for the boat would be terminated. They also had contacted another buyer from New York that wanted to buy the boat. I was a former Olympic Class Sailor and knew a boat like this should not die this kind of death. I wanted to leave right away and drive the 70 miles to save Miss America IX, but my wife had strong objections to this and reminded me that we had just moved and didn’t even have bedroom furniture. I had a strong feeling that I had to save this boat, and together with my wife and daughters left on a dangerous drive to Algonac in heavy fog. With Miss America IX now being protected by her third custodian, I with the help of my father Harold go to work preserving her as much as possible to original glory. The years had claimed her original engines and all but a few of her original fittings. I remember my father’s idea, that we knew a lot of people at GM and suggested they see if someone would donate a couple of Chevorlet racing engines to repower her. Harold promised “If you get the engines, I’ll pay to put them in.”

GM wasn’t officially involved in car racing at the time, so no engines were available for the restoration. I remember an unmarked van pulling up to the office and the driver coming in and saying, “I have something for you”. He backed into the repair garage, the overhead garage doors were closed, and he unloaded two 427 Chevrolet racing engines. He then said, “I was never here, you don’t know me, have fun.” Then he was gone.

As we worked on the preservation (not restoration) we were careful to only replace what was necessary. The original mahogany and gold leaf lettering, along with the dings and dents that were originally put there by GarWood and Orlin Johnson were not touched. A new exhaust system was fabricated to resemble the exhaust stacks from the original Packard V-12’s. The stacks stick straight up in the air and without a windshield, there is nothing between you and them excepts the wind. In the end, the boat weighs about 5000 pounds less than she did in 1930 and 1931.

What makes Miss America IX unique from the other surviving Harmsworh Race Boats (which are only a handful) from the Golden Age (1920 to 1933) is that she still is put in the water, creates a fine white spray, makes a lot of noise and goes fast. I and my wife Diane have spent the last 50 years traveling all over sharing the boat and its history with our DVD presentations. We have been to Canada, throughout the Midwest, Northwest, Florida, and the Southeast visiting boat shows, Concours, car shows and special events.

One thing we really enjoy is showing Miss America IX to children. The photo opportunities for parents are great and the children get to learn the history of the boat. With the parent’s permission not only do I allow the children on the boat but even allow them to start the engines. Imagine the excitement of being young, feeling and hearing 1,100 horsepower come to life! The thrill of doing that will always be remembered.
A memorable moment for me was a few years ago after putting the boat on her trailer at the Annual Sunnyland Show in Tavares, Florida. I was approached by one of the chapter volunteers who thanked me for bringing the boat again and wanted to say a final goodbye as he would not be there next year. As we spoke, I learned that the man had a stage four lung cancer and did not believe he would make it to the next show and regretted that he never had the opportunity to ride in the boat.

I looked him straight in the eye and said, “Next year at 9AM on Friday, I will take you for that bucket list ride. I will be here; you promise me you will be here too.” The following March the man was there to welcome myself and Miss America IX back. I kept my promise and we went for a thrilling high-speed ride. I later learned that the man passed away three months after that promised ride.