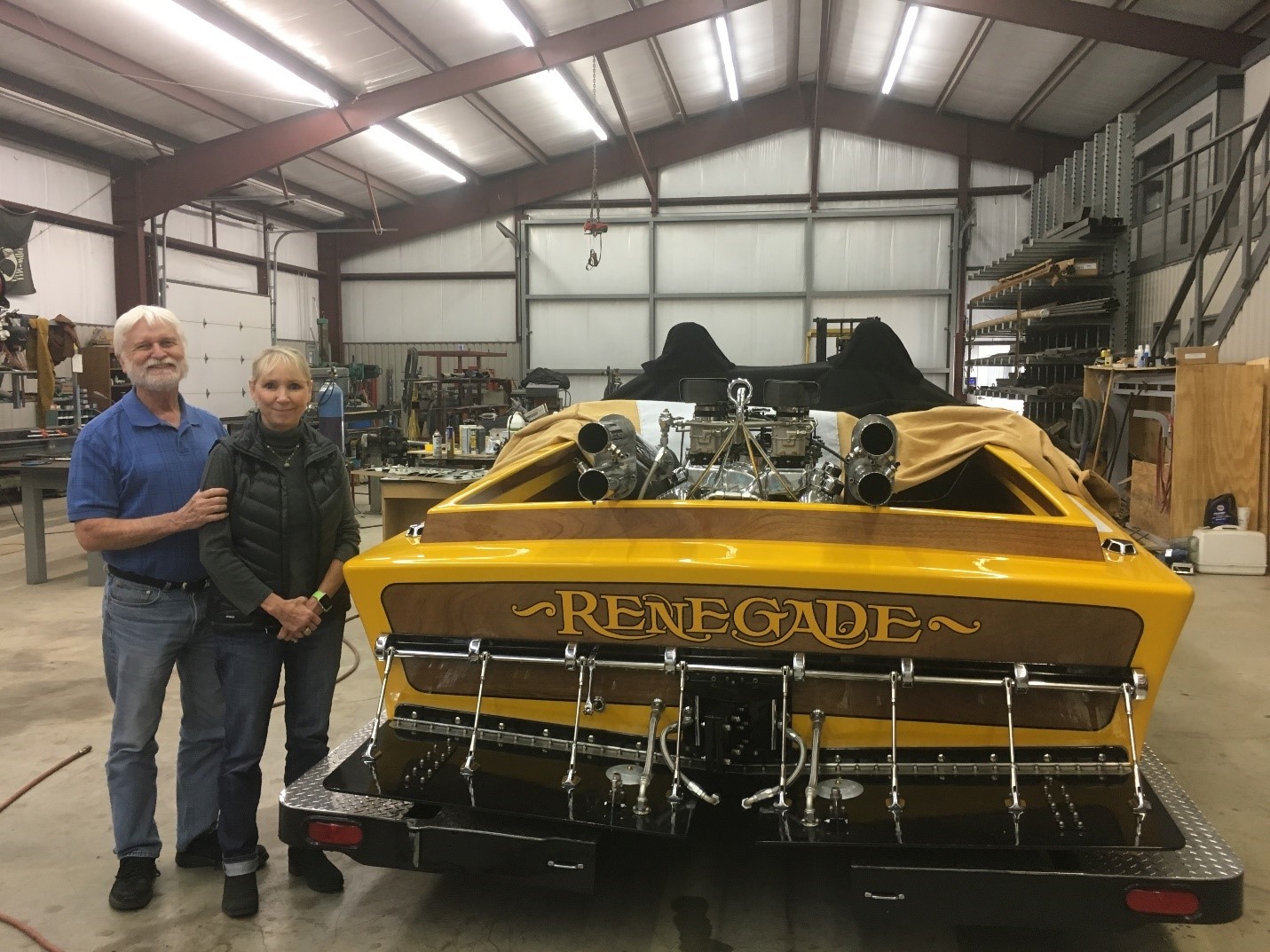 by Pete & Ramona Seitz members of the Heartland Classics chapter

In 1968 a Bud and Bob Muraves decided they wanted to build a controversial style of boat. The boat became known as Renegade. It is an all wood Campbell boat with a modified bottom that was rigged to be a ski race boat. It became a famous racing boat in the late 60’s, early 70’s. The boat was custom-built by the Campbell Boat Company of Glendale, CA to the brother’s specifications and is a one off all wood 21′ 8′ beam, with fiberglass over wood boat. It was the last wood 21′ boat that was ever made by the Campbell Boat Company.

The brothers were looking to build a boat with two motors that would give them a leg up on the racing competition. The brothers used a twin highly modified Ed Pink Racing Engine from Van Nuys, California, 454 Chevy big block engines with 12(twelve) two-barrel Holley carburetors on Edelbrock ram log manifolds. Each carburetor has 310 CFM. John Peters owner of the Freight Train dragster developed the coupling to connect the two engines together. Renegade turned out to be very competitive in endurance racing and won the Long Beach, California to Catalina Island ocean 62 mile ski race in its class many times.

It was retired and was found under an orange tree in a very bad condition by, Clyde Dedrick, from Oceanside, CA. He bought it and then he let it set for more than 20 years.
We purchased the boat about 5 years ago. After studying the historical importance of Renegade he decided to restore the boat in Southern California where many people remember the boat or stories of the boat.

Dave Sammons of Carlsbad, CA is known for his ability to research and restore race boats. He managed the project and did much of the detail work, this project would have been impossible without him.

During the research and study of the boat we verified that the carburetors were original but they have not been built since 1973. It required a lot of thought and a big decision but it was decided to rebuild them. They were restored by Ricks Home Carburetors, Santee, CA. In addition, the manifolds are very rare and classic to the boat. All in all, we decided to try to maintain as much of the original bolts, fuel fittings and engines parts as possible.

We had Machine Tech Racing Engines of Oceanside, CA rebuild and dino the engines. We proved that a true 16 cylinder, two V8 motors can and does double the power. As verification we decided that the engines should be tested on a dino. We replicated the original Chevrolet 454 engines as close as we could and each were just over 600 HP each and over 1,240 HP together, 800 HP at 3,300 RPM.

During the same time we had the hull completely stripped to wood and Harlan Orrin an 80+ year old in his Fallbrook, California shop repaired the wood. Harlan’s resume reads like the “Who’s Who’s” of the west coast performance boat building industry. Since Renegade was finished, it has been to many boat shows and has taken first place in its class.