Restoring the Minnow – what a long strange trip it’s been 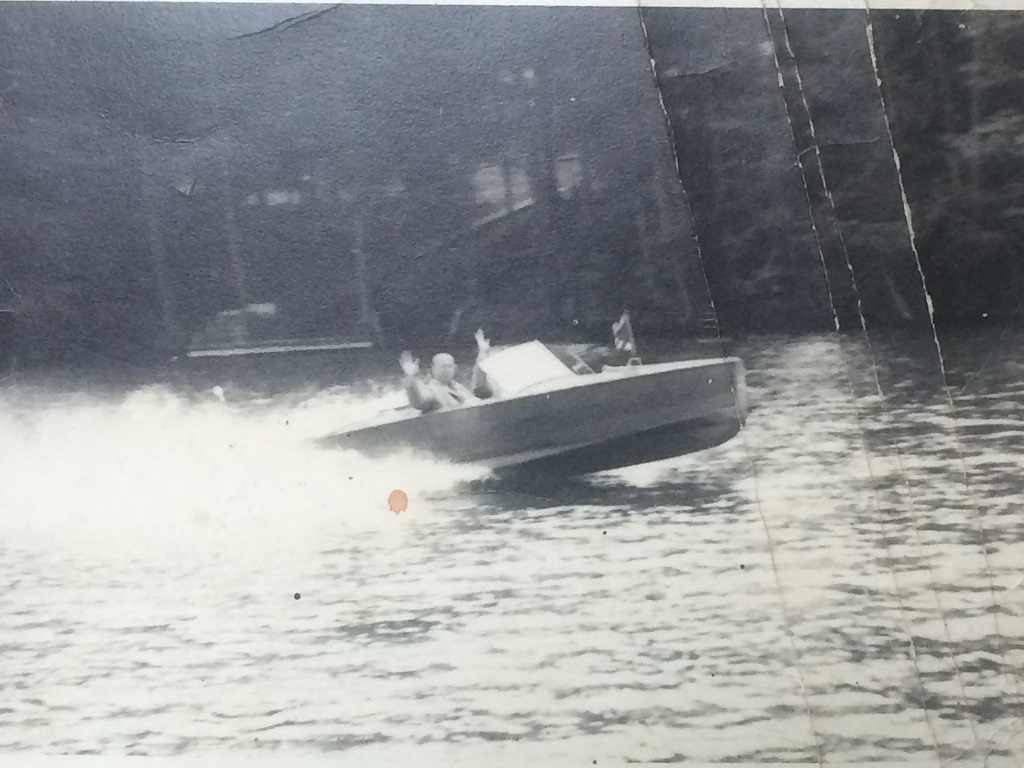 By Trux Dole member of the Columbia Willamette chapoter

The Minnow, a 16’ 1930 Dodge runabout, is somewhat unique in that it is basically all original. Across the entire country, there are only 7 similar boats made between 1930-34 listed in the ACBS ranks. Of the four 1930 models, only one other still has the original Lycoming 40 horse engine and parts. The Minnow lived a Brigadoon-esque life at our family’s Adirondack Great Camp, being used just a month out of the year. Additionally, because ‘Camp’ was only accessible by boat, it served a more functional role that did not allow time or money for fancy restorations or upgrades.

Before my grandmother died, the Minnow had not been refinished in 30 or 40 years. As such, she commissioned the caretaker to refinish the Minnow over the winter. The result was less than spectacular with green house paint in the bilge and on the bottom and an awkward attempt at bleached topsides.

In the fall of 1996, armed with woodworking skills, a meager paycheck, plenty of naivete and enthusiasm but little time or cash, I started a restoration that has turned into a long dry saga for the Minnow spanning 4 states and both coasts.

Disregarding my father’s misgivings, I borrowed the bottom of a barn in North Salem, NY and soon had the outside stripped, but then I got engaged and got into business school in Oregon. Then life happened – marriage, family, job, my son’s six year losing battle with cancer and co-founding a digital health startup.

And so, the Minnow sat for 20 years, in one garage after another. Thankfully my father kindly slapped a couple of protective coats of varnish on her. Unfortunately, when he sold off our beloved Adirondack Camp, I faced selling the Minnow or bringing her to Oregon. Despite lacking a boat house or direct water access, my choice seemed obvious. However, a new 5200 bottom was needed if I did not want to become a submarine captain. On my father’s recommendation, I contracted with Michael Claudon of Snake Mountain Boatworks in Middlebury, VT. The cost wound up being double the original estimate. The unique herringbone patterned bottom planking had to be almost completely replaced. Additionally, Michael had Peter Henkel of Chris Craft parts in Detroit rebuild the engine.

Since the Minnow arrived at my garage by box trailer in 2015, various misadventures and related side-projects have ensued; from having to find and restore a trailer that actually fit the boat, to completely rewiring the electrical system with period cloth wire, to custom building a matching replacement gas tank, to finding a chrome shop still able to operate in the stricter environmental climate of Portland, to enlisting Jack Mayeaux to re-upholster the seats with matching blue vinyl. The Columbia-Willamette ACBS members have been amazingly supportive resources throughout the process, and they throw a hell of a crab feed too.

My wife, in her quiet but insightful manner helped frame my restoration effort by telling me to work on it when I wanted to instead of letting the stress of completing it get to me. And so, I am in the running for perhaps longest restoration effort. With only the deck and boot stripe to finish, nickel trim to polish and engine to get running, I know this will be the season the Minnow again frolics in the water. But then again….