Resurrection Of A Basket Case 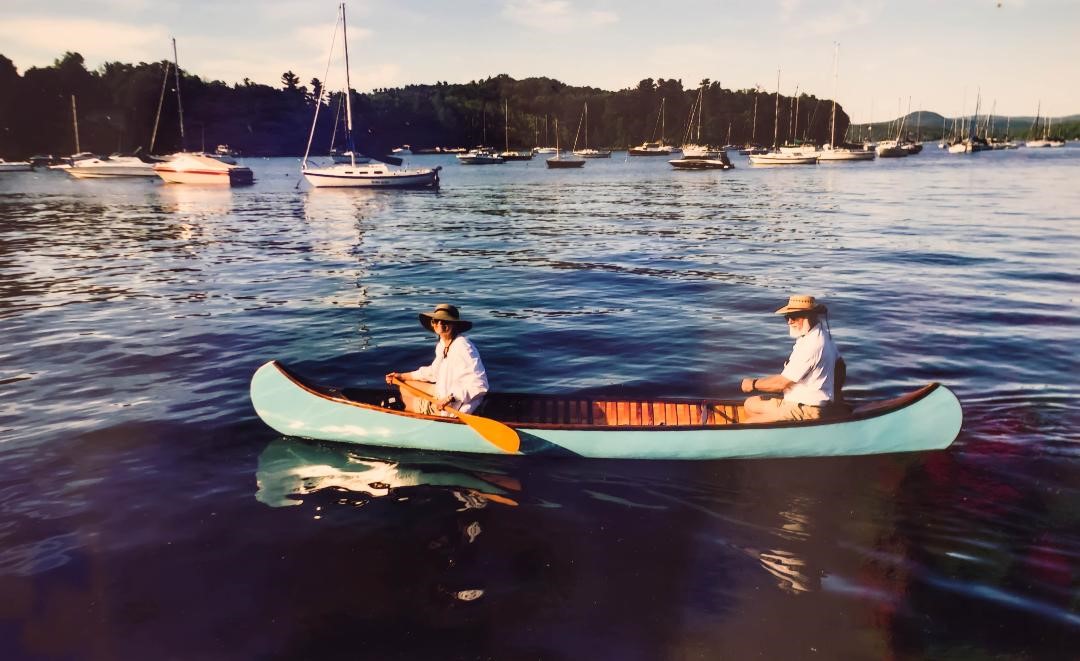 by Michael J Munson member of the Lake Champlain chapter

The tale of a free boat project boat for which I paid too much.

In the summer of 2014 some friends forwarded to me a local on-line ad for free canoes. I had just finished a yearlong restoration of a 1938 Old Town HW, a project that I enjoyed very much, so I went to check out the ad. I looked at about a dozen in various stages of disrepair. My eyes kept coming back to a dark hulk with no canvas, no out-wales, no keel, no stem bands, incorrect seats and one badly cracked in-wale. But it had long decks and sweet curved coamings. I circled around and re-examined the others, but I kept coming back to those sweet coamings. I was hooked.

My wife, Mary Jane, helped me get it off the truck and settled in my greenhouse boat shed. In the new light, it looked pretty sad. She declared it a “basket case” that would never float again. I still thought that a few new ribs, a few planks, some work on the stems, and it would be ready for new canvas. Sounds simple, right? Then I noticed that it was not old varnish on the inside, but brown paint. Only after several days with paint stripper and scrapers was I able to see just how badly deteriorated the ribs and planking were. I did, however, uncover the serial number which allowed me to determine that it was a 17’ Old Town OTCA, grade AA, built in 1921.

My first step was to open up the ends which revealed previous repairs that had not held up well. The upper stems had been replaced with flat boards offering only end grain for fastening ribs and canvas. The narrow ends of the decks had been removed and replaced with small pieces to fill the gaps. It wasn’t pretty! Before moving it into the shop I clamped temporary in-wales on both sides with temporary thwarts to hold the shape of the hull. Once it was in the shop I scarfed an 8’ section into the broken mahogany in-wale, and fitted new stems. Then I shaped and installed new ends to the in-wales where they met the stems. This provided a base for the rib and plank work that followed. It had become clear that the existing ribs were not strong enough to hold new planking, and that the existing planking was not strong enough to bend in new ribs. It would be a piece by piece job. Most of the ribs and all of the planking had to be replaced. I located a Vermont saw mill that could provide short, six to eight foot, pieces of cedar that could be milled down for ribs, but I had to go to Maine to find longer stock for the planking.

It was slow going. I first replaced a couple of ribs, often fastening them temporarily to old planking just to hold the shape, and then replacing a few planks, often temporarily fastening them to old ribs. A lesson learned was that putting towels soaked in boiling water on the planks helped bend them to create a fair curve around the ribs, especially at the ends. As spring approached, the planking was completed up to mid-ship gunnels and the old hull looked like it might actually float again.

The next task was to create the new decks. I had some thick mahogany stock so I decided to steam bend it into the shape of the long decks. After consulting Jerry Stelmock of Island Falls Canoe Company, I created a heavy bending jig, boiled the blanks for a couple of hours, and clamped them into the jig Once cooled, it still took a great deal of shaping to achieve a satisfactory fit and crown. With this complete, I could install the final bits of planking and prepare the hull for the outer canvas. Preparation involved sanding and coating the planking with boiled linseed oil.

As Christmas approached, the canvas was stretched diagonally across the shop to form a pouch, and the canoe was gently lowered into it. After bracing from the ceiling, the tension was increased until it fit smoothly around the body of the hull. Then it was carefully stretched laterally and tacked to the ribs just below the ends. After the canvas was trimmed and tacked around the stems, it actually looked like a canoe. Canvas filler (Tung oil, silica and alum) was rubbed into the fabric to create a smooth and watertight surface, and the canoe was left to cure while we escaped Vermont for a few weeks of warm weather.

At long last I was at the finishing stage. I could finally turn my attention to the sweet coamings that originally drew me to the derelict canoe. Again, a bending jig was made and thin strips of mahogany were steam bent to the shape of the deck edges. These were carefully fit and faired into the in-wales.

The new mahogany out-wales were more of a challenge. After several failed attempts to steam bend the compound curves, I decided to create each out-wale in three sections, scarfed together. This was much more successful.
We had our minds fixed on taking the OTCA to the 2016 WCHA gathering so I worked steadily applying eight coats of varnish to the interior and three coats of paint to the exterior.

Then the new keel was made and installed (and painted), the stem bands installed, and the seats and thwarts fitted.
We made it, and “the blue canoe” first touched water at Paul Smith’s College in 2016. What was envisioned as a one year refurbishing turned out to be a major rebuild. I estimate that at least 95 percent of the boat is new material. It should be good for at least another half century of enjoyment.

Postscript: It had always been my intention to rig this canoe for sailing. After the first season in the water, I fashioned hollow spars using the bird’s mouth method, commissioned a sail from Dabbler sails, fashioned lee boards, and refinished the rudder that had come with it. It is finally fully rigged, but, sadly, has yet to be sailed.