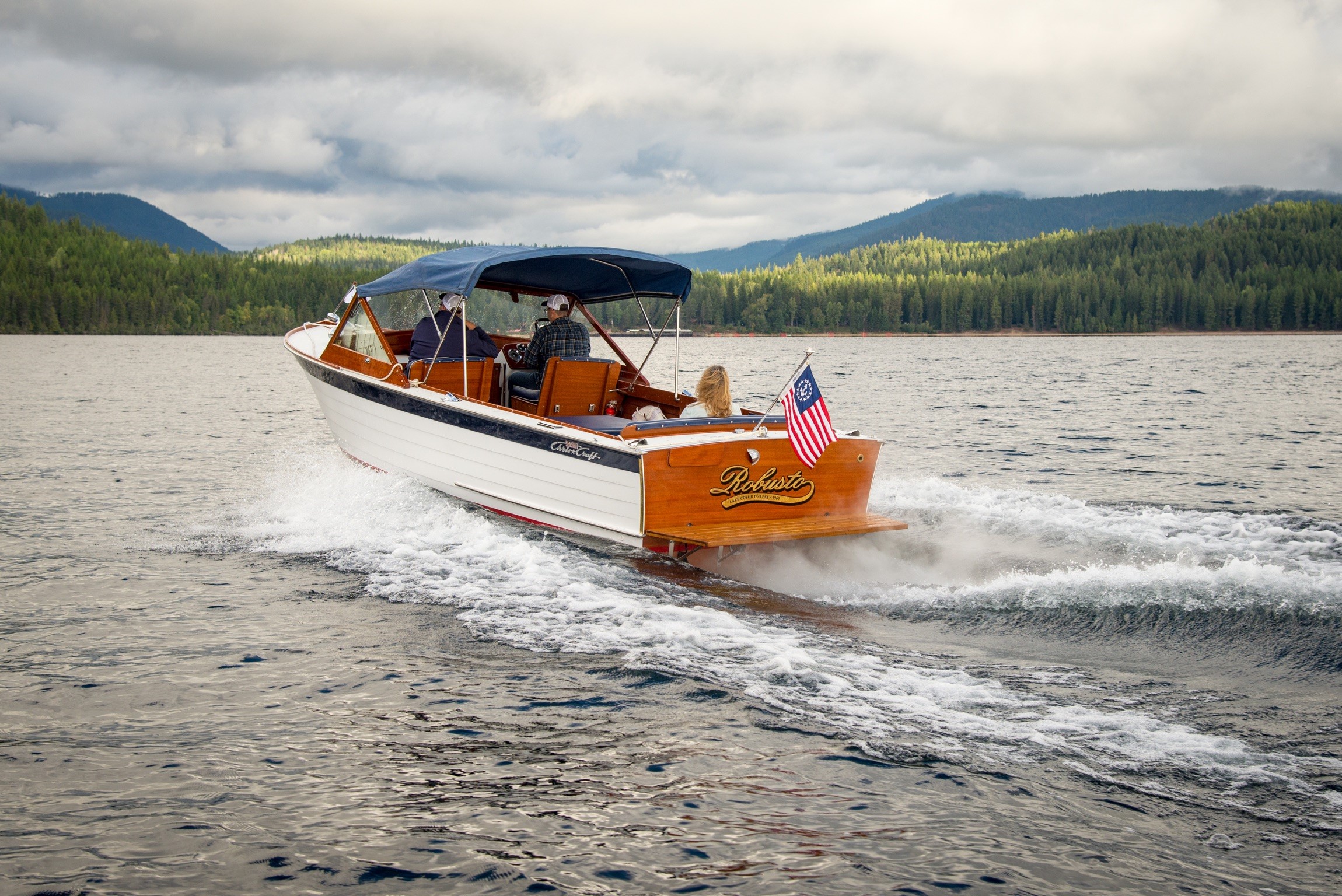 ROBUSTO – Name is a series of Cigar shape related boat names owned by a group of us here in North Idaho.

1960 Chris Craft 23’ Sea Skiff Ranger – One of 51 Sea Skiff Hulls for 1960 and a fewer number of Range finished craft. This option included ceiling boards and a few other additions. Lapstrake construction, restored interior, new floors, Jumps seats, other tasteful additions and modified tall canvas. Original power was GM 283ci V-8 but now has aGM 350ci with complete engine bay detail, paint, wires, copper and valve covers. In 2012 I was with a fellow ACBS Member when he bought the boat and asked if he ever sold it to get dibs on buying. A friend and I assisted in replacing the transmission, getting the bugs out and a few outings on Lake CDA.

The owner at that time, who has multiple boats, seemed to lose interest in the boat and a few years later, traded it in on a 1929 Chris Craft 22’ Cadet and the Skiff was in the hands of the Coeur d’Alene Wooden Boat shop and Hagadone Marine… I finally bought the boat from the Wooden Boat Shop and began using her. There was considerable deterioration of the deck, windshield surround and flooring so repairs were begun.

A new member asked to be a partner to learn, get the hang of being a boat owner as well as having fun with a cigar and new friends on the water… and so the ownership was split for a while until the partner decided to buy out the boat and embark on a complete redo. With many ideas and recommendations freely given, he decided to perform extensive original and non original resto-mod improvements. The boat then went into a complete refresh mode over the winter and was taken down to bare wood, new king plank added, huge chromed bear claw on the new deck, refit the window frames, dolled her up, painted, varnished and repowered with a highly customized V-8 by another local member and perfectionist.

She only lasted with that owner for a couple of years when he and his wife spied a lovely Century Coronado and my gal and I jumped at the offer to get Robusto back in our hands.
This craft handles the rough water very well and is a very comfortable and roomy boat. The Inland Northwest can dish out some unexpected weather and she is a dream to be in, no matter the conditions.

Come take a ride and smoke a stogie…
Photo Credits to Wes Yandt and others.