Rumba Throughout The Years 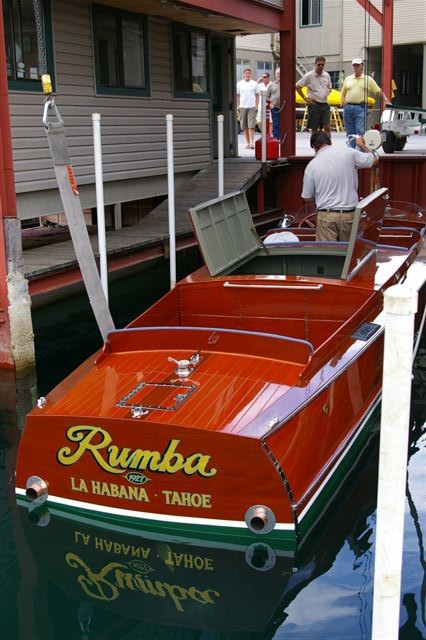 by Susan Rodriguez member of the Northern California/Lake Tahoe chapter

Rumba is a 1927 triple cockpit 26’ Baby Gar, Jr., a model that was built only one year and was showcased in January 1927 at the New York Boat Show in the Barclay Hotel. She is #41 out of 75 runabouts that were built. Interestingly, this is the only time GarWood offered an illustrated brochure detailing the measurements and features of this model.

She was named “Three Fingers” and “Say When” while she lived on the East coast.

She was purchased in the mid 80’s at Irwin Marine and shipped to Sierra Boat in Lake Tahoe, CA. Once in Lake Tahoe, she became “Beowolf” and “Affinity”.

Upon purchasing her 20 years ago from Sierra Boat she became “Rumba”. She has two ports of call, La Habana, where my husband was born, and Tahoe, which my family has been enjoying for several generations.

Her original power was a Scripps G6, which we still own, but she currently sports a Chrysler 440 which was installed by a previous owner when she lived on the East coast.

Much of her exterior was replaced in 2007 with the same African mahogany used in 1927 and a new bottom, keel and 12 frames were installed in 2014. Her interior wood and top sides are still all original.

Rumba has one of the largest transoms ever designed by GarWood and is one of the few models that came from the factory with French Blue Spanish leather interior.

Unlike most GarWoods, her bow is short which allows for much larger passenger space in her three cockpits. The third cockpit is large enough to accommodate six passengers when two small wicker chairs are added.