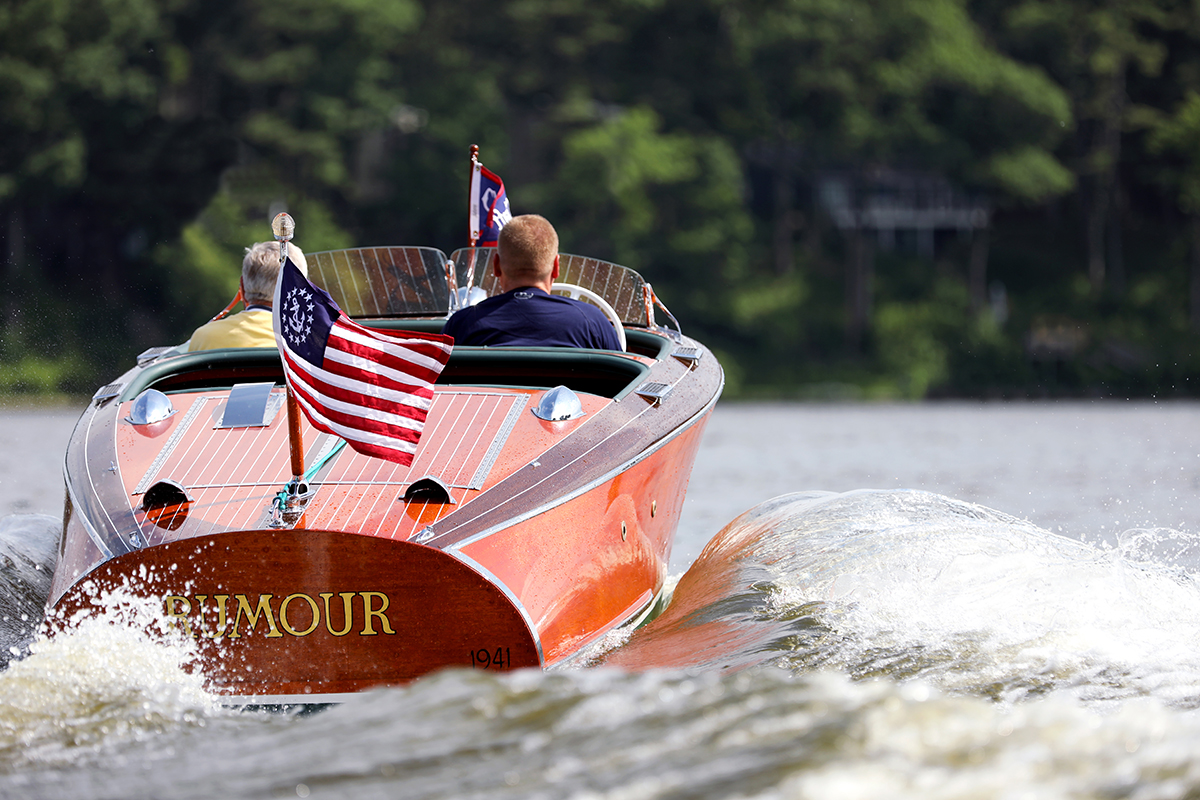 I spent several years looking for a pre-war barrelback, and finally found our boat in Lake Tahoe. I was able to squeeze in a ride, inspection, and even an invitation to dinner during a business trip out to California from the gracious and knowledgeable owner Lee Chase. I knew after my trip, that boat was meant to be ours. Getting it home was another matter, but it finally made it to Chicago after I arranged a backhaul with a boat builder in Indiana.

My first trip with the boat was to my home town of Muskegon, Michigan. When it came time to put it in the water for the very first time, we took it down to the local launch ramp and very gently slid it into the water. I drove it over to the marina where my parents kept their boat and tied up right next to their boat. I think my dad was a little embarrassed, but a funny thing happened, almost every person in that marina came over to look at the boat. It prompted many colorful conversations with the boat owners at the marina about the good ‘ol days when they were kids and their fathers used to have a similar wooden boat they remembered. After a summer of use, we realized that using the boat in its current state was no longer an option as the bilge pump ran at a fevered pace.

So began a long 6 year journey along with my dad restoring the boat. We did bring it to Russ Arrand at the Cadillac Boat Shop for the work, and Russ was gracious to allow us to do some of the work ourselves. We made it a ritual to go up many, many times to work on the boat together. I have many great memories of those many trips up to Cadillac, Michigan, and the great times we had together working on the boat. Memories with dad of the hotel rooms, dinners, early morning coffees, conversations, and lots and lots of sawdust are worth more to me than my boat will ever be. Our first trip with the boat after it was restored was up to Hessel, Michigan. It was our very first show, and we won 1st in class. Since then, we have won numerous awards in Pentwater, Spring Lake, Racine, and Lake Geneva.

During the restoration, I submersed myself in researching every detail about the boat. That meant a trip out to the Mariners’ Museum in Newport News, Virginia to obtain the “Chris Craft Hull Card.” The moment I found the Hull Card, I knew I had a very special boat. The information contained on the hull card noted that the boat was completed and shipped on January 27, 1941 which was coincidentally my father’s 1st birthday. Conducting further research on that same date in 1941, I found in the annals of history a “rumor.”

After hearing this rumor, Joseph Clark Grew, US Ambassador to Japan, wired the following warning to FDR and the US State Department on January 27, 1941:
Telegram #125, 1/27/41 18:00 Tokyo, Japan: A member of the Embassy was told by my ——- colleague that from many quarters, including a Japanese one, he had heard that a surprise mass attack on Pearl Harbor was planned by the Japanese military forces, in case of “trouble” between Japan and the United States; that the attack would involve the use of all the Japanese military facilities. My colleague said that he was prompted to pass this on because it had come to him from many sources, although the plan seemed fantastic. GREW

We all know the unfortunate event that occurred 11 months later on December 7, 1941…….. I thought it only appropriate to name our boat RUMOUR.