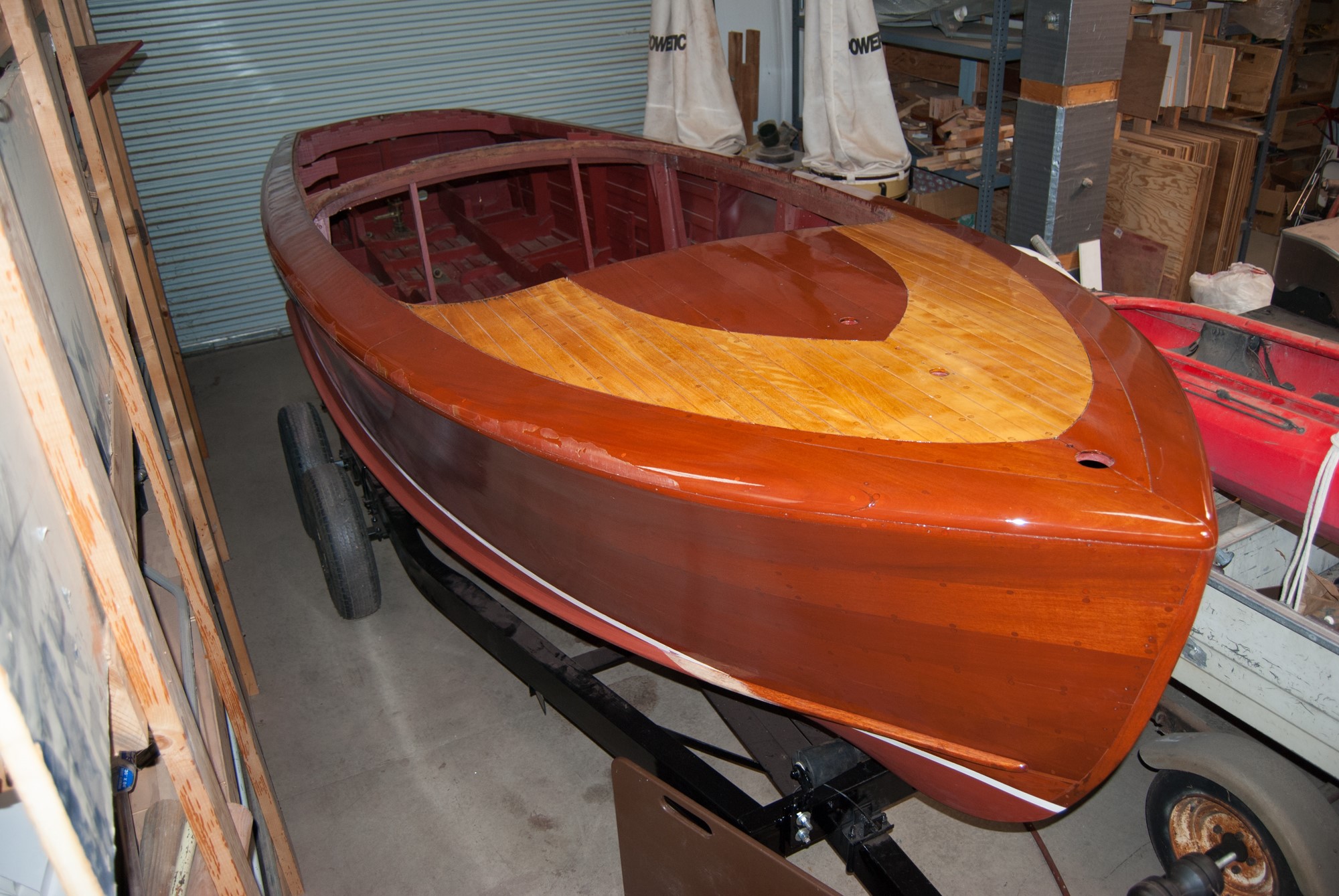 When I was a young boy my father was stationed in Japan as part of his Air Force duties. While there he and my mother commissioned a 24′ wooden cabin cruiser to be built at a boat yard in Tokyo. We had many hours of pleasant cruising on Tokyo Bay and my connection to wooden boats was established. In my later years my wife and I purchased a wooden cabin cruiser and enjoyed all that the California Delta and San Francisco Bay had to oﬀer. My Dad, in an attempt to share our mutual interest in wood boats, bought a 1954 Century Sea Maid. Since one of us lived on the West coast and the other in Texas we were not able to share that dream very often. When Dad passed away in 2000 I acquired the runabout and brought it to California.

222 18′ Sea Maids were manufactured during the period 1950 through 1954. Forty-four were made in 1954, the last year of its manufacture. Its decking is unique with the use of Avodire for its crisp blond look. Our boat is an 18′ double cockpit mahogany runabout with a six cylinder twin carburetor Chrysler Crown engine sporting 135hp.

It needed quite a bit of work. The keel had hogged and many bottom planks were split and had rot. The lower transom plank had rot as well. Fortunately the engine and hardware were intact and in good shape. When I finished a year’s training at the NorthWest School of Wooden Boatbuilding I figured it was time to tackle the Sea Maid. My work area was a leased shop in an industrial park. After removing the engine, seats, dash and anything else that wasn’t integral to the hull I turned the boat over. Turning it over required a little thought as I didn’t have a lift. One wall of the shop and a sturdy workbench provided adequate support for four uprights.

I hung a 3 inch pipe from my supports and had just enough clearance to get her over with straps. After removing the chines, bottom planks, bottom frames, keel and transom I realized I would be able to leave most of the side planks in place and reuse them. Bottom frames and planks, keel and chines all were fabricated using the originals for templates as much as possible. Transom planks were steamed and bent using a cobbled together steam generator (it worked pretty well, actually). I left the side planks and deck as they were. The new bottom planking was fabricated from cedar, the bottom frames from white oak and the keel was made from clear vertical grain Douglas Fir. Standard silicon fasteners were used as well as bungs cut from the host plank. I remember from early in my boat building/repairing days someone saying one cannot have too many clamps. How true that is.

I am happy with the progress so far. My background as a pilot for a major airline didn’t prepare me for this and I have learned that I probably won’t be at the top of the hiring list used by local boatbuilders but I am having fun. Installation of wiring, dash, steering wheel, and fuel tank will be next, followed by the engine. She will go in the water for sea trials before the topside decking and installation of hardware.