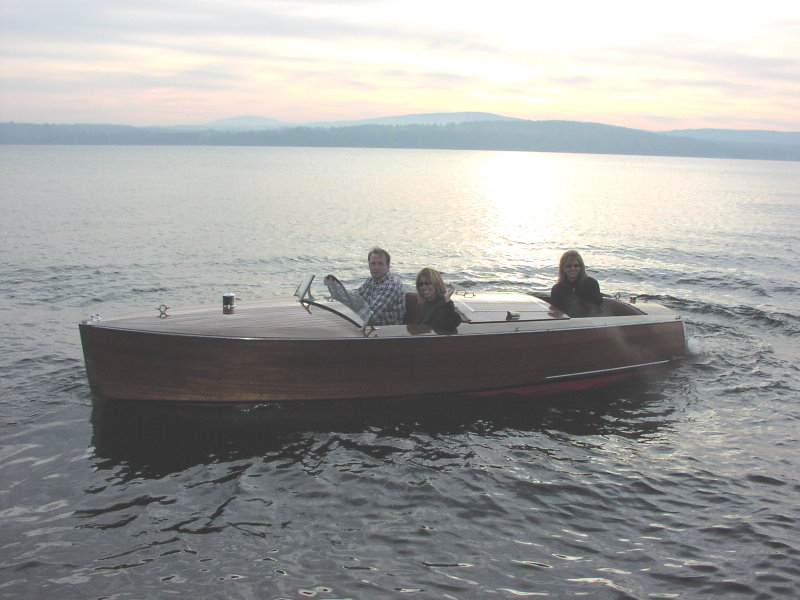 by Rob Bamberg member of the Michigan chatper

Sedgwick, is a 1931 Chris-Craft Model 301 18’ Split-Cockpit Runabout. This was the first year for the 301 and the only year that it came with a 6-cylinder Pontiac engine modified by Gray Marine. She is still sporting her original bottom, steering wheel, instrument panel, engine and cushions. According to the hull card, Sedgwick was completed on July 24th, 1931 and shipped to Boston. Roy Smith of Wilton, NH became caretaker of Queequeg, as he named her, in September of 1957 and lovingly looked after her for the next 47 years.

In September of 2004 Queequeg became mine through the efforts of Bo & Kathy Muller. Sedgwick was a name afforded me many years ago when I cruised around Lake Sunapee in a 1955 18’ Chris-Craft utility. The utility was the boat of choice for 5:00pm jaunts around the lake, hors d’oeuvres on the engine cover, maybe an adult beverage or two onboard and me behind the wheel. Being the chauffer I was given the name Sedgwick by friends and family. We felt it was a fitting name for our new boat

She stayed in my parent’s boat house on Lake Sunapee for the next 2 years until my parents sold the lake house. For the next little while Sedgewick saw the water for about 1 week a year when we visited the lake. She spent her time out of the water in storage with the Mullers.

It was in 2012, during one of those yearly outings, she decided to spin a bearing which was quite noisy. We took the engine to Don Spring in Granby, Ct who did a fabulous job rebuilding the engine and early in 2014 she was water worthy once more.

This last summer, 2019, I made the move from Connecticut to Muskegon, MI and brought Sedgwick with me. She now sits in my garage, with all her trim pieces removed, waiting for a coat of varnish. She now has a home on Muskegon Lake and will, for the first time in many years, spent an entire season where she belongs, in the water. I’m looking forward to enjoying, once again, the hours of fun and the good stories Sedgwick will provide in the years to come.