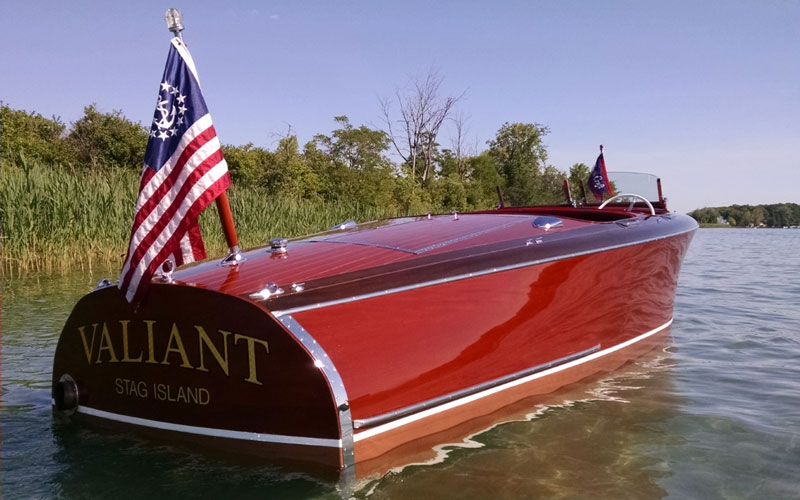 This portrait of Valiant is being shared by Bruce Greening. She was manufactured in 2003 by Pete Fish in Queensbury, NY as a 19-foot barrel back replica. Valiant first traveled to California, then in 2010 moved to Texas, then in 2013 was purchased by Kit & Bruce Greening, Grosse Pointe Farms, Michigan. In 2014, the steering wheel was replaced with a California Classic Boats 1938 Chevy Convertible 4 spoke White Banjo wheel. Valiant now resides several hundred feet from Gar Wood’s Marysville, Michigan factory.

Here’s more of the story about how Valiant got her name:

Valiant was the name of a 1931 Skerry 30 Square Meter sailboat based in Pt. Huron Yacht Club, home of the 2018 BTB Show. Valiant met an untimely death in 2013, when her keel finally broke due to neglect. There are still three 30 Squares racing there (Tomahawk, Moose & Pow Wow), and I am friends with the owner of Moose, all original except for the boom, since 1934. Valiant was left to die behind Moose’s shed due to a lack of money. When she died, the owner sold the lead keel for scrap, and someone cut the bow and stern off (ouch) and she was gone. Since I am a sailboat racer, I asked Bob Riehl, owner of Moose, if I could adopt the name for my boat. He knew I loved sailing, so he agreed and now Valiant has a new transom to grace!

Here’s a photo of Valiant with Kit and Geoff at Stag Island. Geoff’s a sailor, but obviously enjoys Valiant! 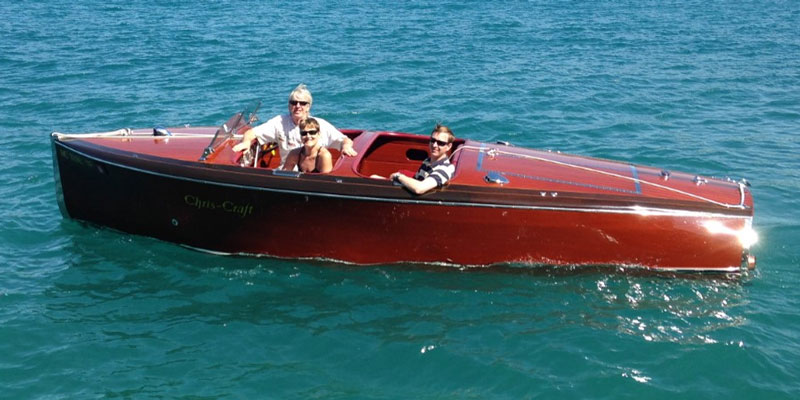 PS-I chased down the original owner on Catalina Island, and I have all of the original documents from the build.