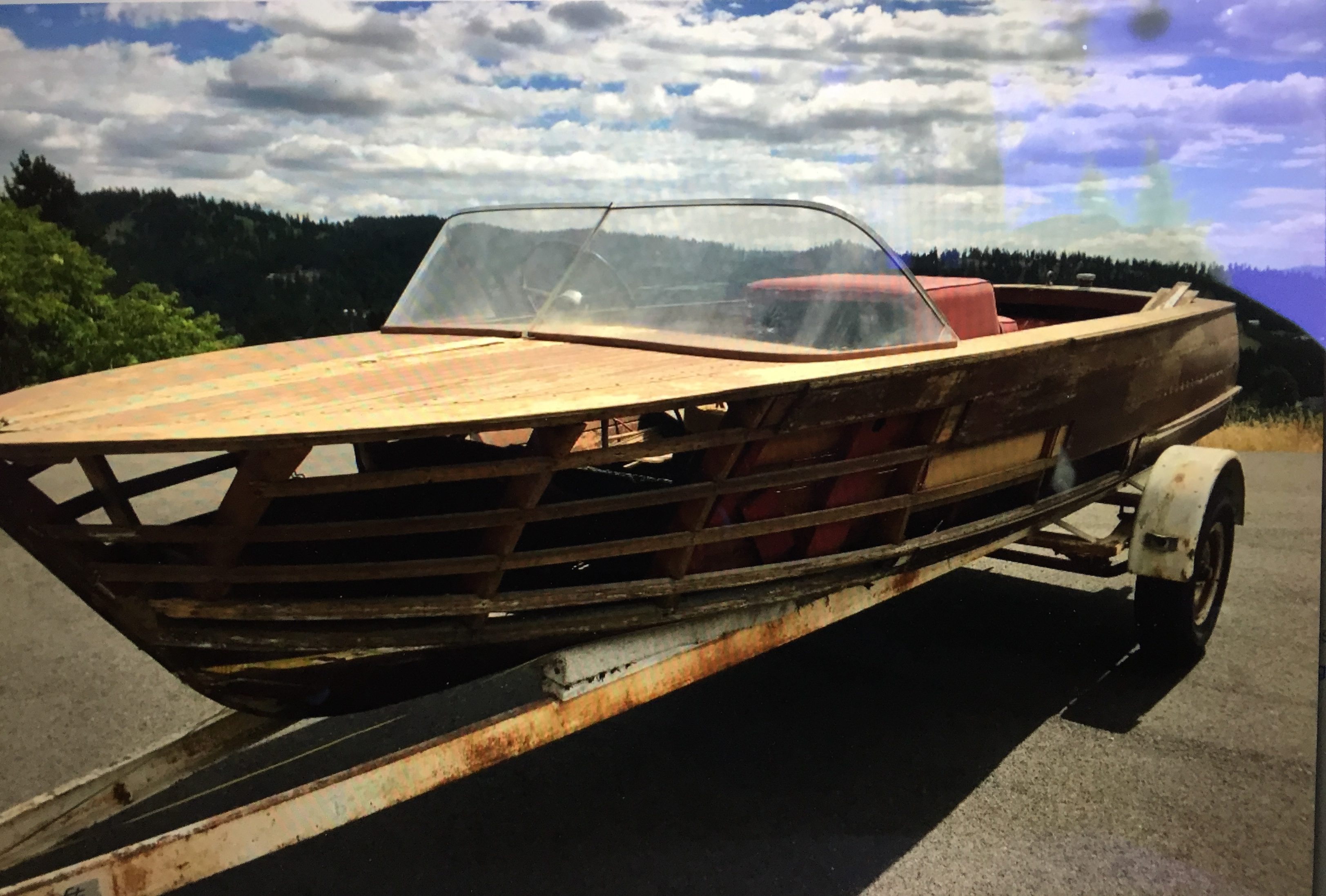 Central Valley High School in Spokane Valley, Washington’s SkillsUSA group takes on the restoration of a 1959 Chris Craft 17’ ski boat for the 2018-19 school year. According to Alan Wardsworth and Ron Beard who are SkillsUSA advisors at CVHS, “SkillsUSA is one of the Career and Technical Student Organizations (CTSO) offered at CVHS and typically takes on service learning, competitive, and community projects.” The project started shortly after the school year began.

According to Alan Wardsworth, “we stumbled on to this project over the summer and met John Whitcomb.” John was super excited to see high school kids learn about the restoration process of a classic wooden boat and all the skills that high school students could learn from that project. A deal was made to take on the project and then sell it upon completion to raise money for the club and pay for supplies. John also became involved in setting a meeting with Daryl Reynolds the current President of the Inland Empire Chapter of the Antique & Classic Boat Society and other member of the group. With John and Daryl’s help we hope to be able to source missing parts, restoration techniques, and tours of Stancraft boats. Area business relationships with SkillsUSA are a big part of the club to give students a look at future employment opportunities, the world of work, and industry skill techniques.

Where do we start?

Central Valley High School is lucky in an age where you see schools across the nation dropping their vocational programs in favor of more traditional core classes. CVHS has woodshop classes with a little bit of the old like table saws, jointers, and bandsaws plus, a bit of the new with a CNC router and new laser engraver. At the other end of the hallway is the metal shop where manufacturing and robotics is taught with traditional welders and sheet metal plus some new additions to the shop of a 8’ CNC Plasma cutter and Mig/Tig welder.

The first order of business this year will be to locate and label everything, source missing parts, and then remove the deck of the 1959 Chris Craft and then to secure it to a rolling rig. We will probably start with the engine since it’s already removed and will take up less space to start the school year. As we gain more knowledge about hull restoration we will start that part of the restoration during the winter.

If you would like to be involved, Central Valley High School SkillsUSA would like to hear from you if you have restoration knowledge, parts, supplies, or would like to make a donation to the program. Please contact Alan Wardsworth at 509-558-5157 or [email protected]

Phase One: Laying out project

Central Valley High School SkillsUSA took delivery of the boat on September 25, 2018. The group with Mr. Wardsworth decided to unload the loose parts and take pictures of all loose parts and inventory those parts and conditions to be stored in the Manufacturing room D109 back storage room. P1S1: Cleaning, labeling, and storing those parts with a good picture is a top priority. P1S2: Cover boat while outside and photograph general condition, damaged areas in need of repair, and replacement parts still on the craft. P1S3: Inspect engine for parts needed, general condition (compression test), mount in frame or on engine stand to make ready for testing. Source parts for Chris Craft 327F Marine engine year 1965-68 (1965)? and determine which letter code it is. Since this is not the original engine some of the value in a concourse restoration will be lost so it’s probably best to restore the engine to be more reliable like an electronic ignition and upgraded carburetor. The original engine is a 283 Chevrolet.

Chevrolet marine 327. P2S1: 10/1/18 We removed the valve covers and everything looked good. Even had clean oil in the journals like it had been run not too long ago. We then removed the intake manifold and it did not look as good with ⅛” to ¼” of sludge build up. The good news is there was no water leaks or rust. We decided to remove the oil pan and clean both the top and bottom sides of the engine knowing that there is probably a large build-up of sludge in the pan.

We pulled the heads last night and found a little rust in #8 but I think it was an open valve and it just drained into it. It cleaned up and didn’t damage the wall plus, we could only find very light wear in the cylinders and no carbon buildup, so we think it was probably a bottom end ring and gasket rebuild on an engine with few miles plus, they usually stamp an oversized mark on the pistons. It’s also a 283 and we are not sure why the label has 283 stamped out and 327 added but the block is 3.875” bore, a 327 is 4.0” bore.  We will probably drop the pan for inspection and check the bearing and replace the oil pump, gaskets and seals while we are at it. Heads look good but since we decided to pull the heads, we will go through the engine first rebuild and then do a compression test which is kind of backwards, but that rust might have damaged #8 and we can make sure oil is pumping where it needs to.

It’s a Chevy 1962 283 cast in December with a 2-bolt main bearing according to everything we have looked at. It’s confusing because 283 and 327 used the same casting number 62-67 and the only difference was the 283 has a smaller bore and thicker cylinder walls so it can be bored up to .060 over! A few sites said .120 was possible but engine bore over .060 makes it a 301 and were a favorite of drag racers in the day because they were indestructible.

P2S2: 10/22/18 Today progress was made on the CC stripping the interior parts. Labels and photos were made, and parts stored. Gas tank was removed, and all the parts are complete, the tank will need to be hot tank because it was full of rust and a new copper fuel hose at shut-off was broken. The tank mounting forms are made of fir (usually made from white oak) will need to be reproduced because the carriage bolts have rusted to the point of becoming part of the wood. P2S3: 10/22/18 We continued the disassembly of the engine draining the engine oil with no metal particles in the oil or filter but there was only a quart and a half of oil. We removed the side access panel and it looked pretty good considering the amount of sludge in the lifter galley. We removed the oil pan with no success and then determined that the transmission and housing need to be removed because it has (5) oil pan bolts through the tranny housing. P2S4: 10/29/18 We decided to put the engine back together since the bottom end looks good so that we can test some of the components and the compression of the engine plus we will be able to see if oil is traveling to needed areas. Continued disassembly that found brass panhead screws in the inside sheathing a practice of Chris Craft in the late 1950’s. (will need to be sealed prior to 5200 application).