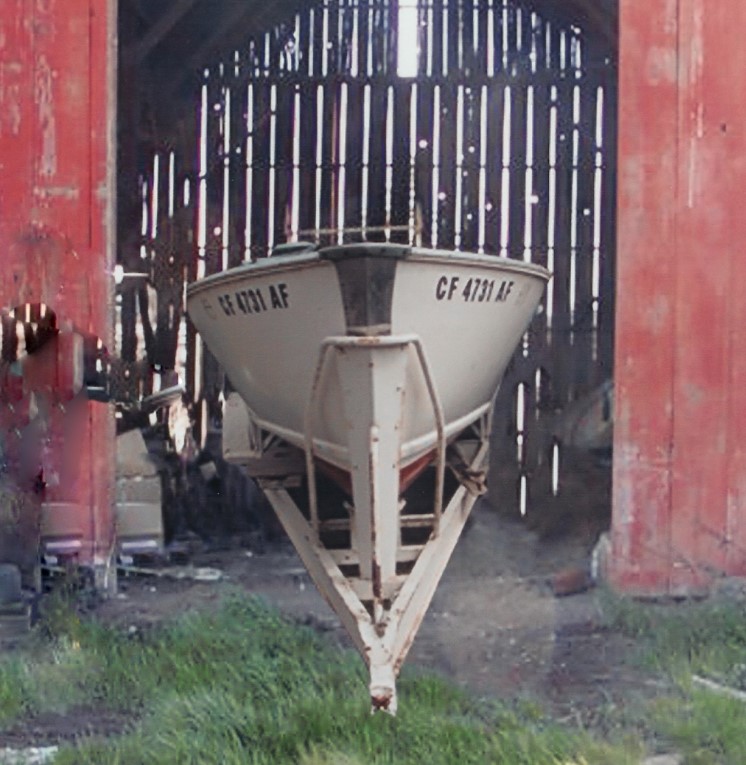 Stardust is a 1951 Besotes boat built by George and Charlie Besotes in Stockton, CA and is the second one they built. The first one is at the bottom of Lake Tahoe.  I learned about Stardust while attending a Besotes boat club event on the Delta in Stockton, California. We had stopped at a Denny’s restaurant for breakfast where a man came over to our table and introduced himself as Joseph Balcao.  He told me that my boat, a 1956 Besotes which was parked outside, looked better than the newer Besotes in stores.  I accepted the complement graciously.  Joseph continued to tell me he had been a friend of George and Charlie Besotes and had a Besotes boat sitting in a barn on a ranch he owned near Stockton.  Even more fascinating is that it was for sale.  We exchanged phone numbers and went our separate ways.

The idea of owning a 2nd Besotes intrigued me.  So, after our event, I called Joseph and made an appointment to see the boat.  A month later, I found myself looking at the proverbially “barn find.”  The boat was a complete mess and required an immense amount of work. But upon seeing it, I made an offer which he accepted.  Joseph said he had purchased the boat at a Shell station in Lodi, California in 1968 for $800.00.

According to members of the Besotes Club in California, this boat, being the 2nd Besotes built, was an experimental boat.  The Besotes brothers were accomplished designers and mechanics and tried a number of things on the boat which they ultimately rejected.  I learned that the Besotes brothers were charter members of the Stockton Water Ski Club. One memorable story is that they took Stardust down the Sacramento River to the San Francisco Bay, around Alcatraz Island, and back up to Stockton while one of them was skiing on the back.  Additionally, I had heard that one of our members found a copy of a video of my boat at Lake Tahoe taken in 1953 at Henry J. Kaiser’s place.  The video is now in my possession and is a personal favorite!

I had arranged with Clayton John, a self-proclaimed boat restorer, to bring the boat directly to his home for restoration.  I towed it on the original Besotes trailer, down highway 99 with no license plates and most important without any incidents!   After our 3-hour journey, we arrived at its restoration home and disconnected the trailer.  Stardust is a V-Drive boat and all the pieces, together with the skeletal remains of a deceased possum, were found in the bottom of the boat.

As of this date, Stardust is about 80 % finished and, like all restoration projects, I hope to have it completely finished in the near future so we will be able to see the oldest floating Besotes boat on the water!