Story of the Stern Flagpole 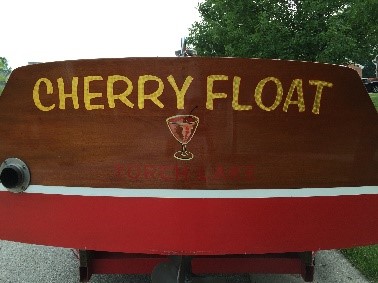 by Tom Lehn member of the Ohio Valley chapter

To understand the story of the stern flagpole, you need to know a little about Cherry Float. She is a 17’ 1948 Chris-Craft Deluxe Runabout with the KBL 131hp engine. She adopted me as caretaker in June 2014. She was purchased in August 1947 by Thomas Darden, sold to Thomas Lance in 1993 and then to me. Three owners all named Tom in 67 years. And other than one part that I know of, she is in original condition – original bottom and planks, original motor, and original interior. Other than engine maintenance and re-varnishing, she is pretty much as delivered in 1947.

In September 2015, we were heading home after our last run of the season on the Ohio River. I noticed the stern flagpole was wobbling very badly. I was afraid it was going to fall off into the river, so I took it down for the rest of the ride. I put the flagpole in my workshop as a winter project. I knew I could call Classic Boat Connection and order a new replacement. But given that pretty much the entire boat is original, I was determined to repair and save the original.

When I finally began the repair, it quickly became apparent that I needn’t have feared losing the flagpole in the river. The pole was wobbling just above the ferrule, but there was no chance it was coming apart. Someone had previously repaired it by inserting a piece of threaded lamp rod and lots of JB Weld. It was quite the project to clean everything out with a Dremel, hand chisel and various knives. The stub of the old tenon was then sawed off and a hole was drilled into the flagpole (very carefully!) with a Forstner bit. Finally, I turned a new tenon from a scrap of mahogany and glued it into the bottom of the flagpole. The pole was sanded, stained, and varnished. While I was at it, I refinished the bow flagpole at the same time. After all the pieces were reassembled, the stern flagpole was as good as new!

The flagpole was in place for the maiden run of the 2016 boating season and it looks great!