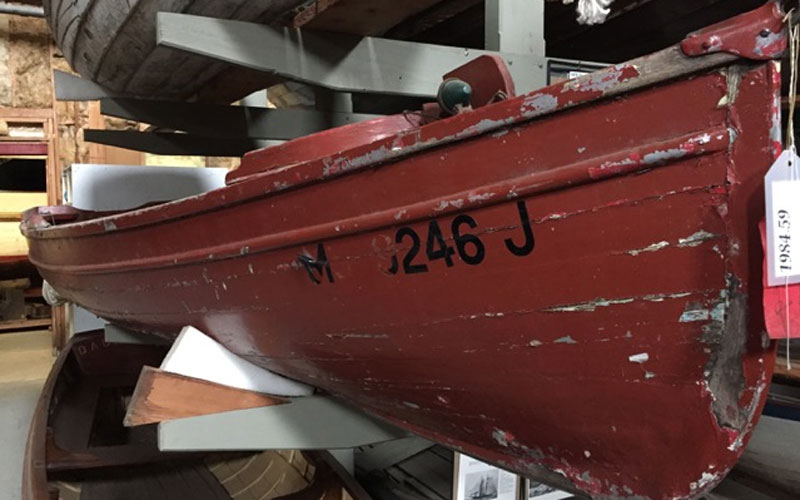 Sometimes, an old boat needs a little help to tell “the rest of the story”.

Boat 3308 and her story will be a featured part of the Mystic Seaport’s ANTIQUE MARINE ENGINE EXPOSITION August 19th and 20th.

When did this story’s search party begin?

On March 11, 2017, this website editor received an email from Ed Hill which began:

“I am a Mystic Seaport volunteer working with Phil Tankard in the Seaport’s Watercraft Hall.
Located in the hall is a a circa 1916 outboard motorboat by the Evinrude Motor Company Model X1B Serial 3308 (Mystic Seaport Accession No. 1984,59).
Each year the Seaport holds its “Engine Show” and this year’s August event plans to exhibit this boat among a collection of antique Evinrude engines.”

Through the ACBS Directory, two Evinrude boat owners were located and the networking began to compile the historical details of the Evinrude Boat Story.

Three story boards have been compiled by Ed Hill to be displayed with the boat at the Mystic Seaport Museum.  The first is a letter from Dennis Evinrude, Great-nephew of Ole Evinrude.  In brief, the Evinrude boat history is summarized by him: 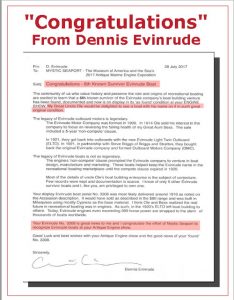 The legacy of Evinrude outboard motors is legendary.
The Evinrude Motor Company was formed in 1909. In 1914 Ole sold his interest in the company to focus on reversing the failing health of my Great Aunt Bess.  The sale included a 5-year ‘non-compete’ clause.
In 1921, they got back into outboards with the new Evinrude Light Twin Outboard (ELTO). In 1921, in partnership with Steve Briggs of Briggs and Stratton, they bought back the original Evinrude company and formed Outboard Motors Company (OMC).

The legacy of Evinrude boats is not so legendary.
The engines ‘non-compete’ clause prompted the Evinrude company to venture in boat design, manufacture and marketing. These boats helped keep the Evinrude name in the recreational boating marketplace until the compete clause expired in 1920.
Most of the details of Uncle Ole’s boat building enterprise is the subject of conjecture. Few records were kept and documentation is scarce. I know of only 5 other Evinrude survivor boats and I, like you, am privileged to own one. 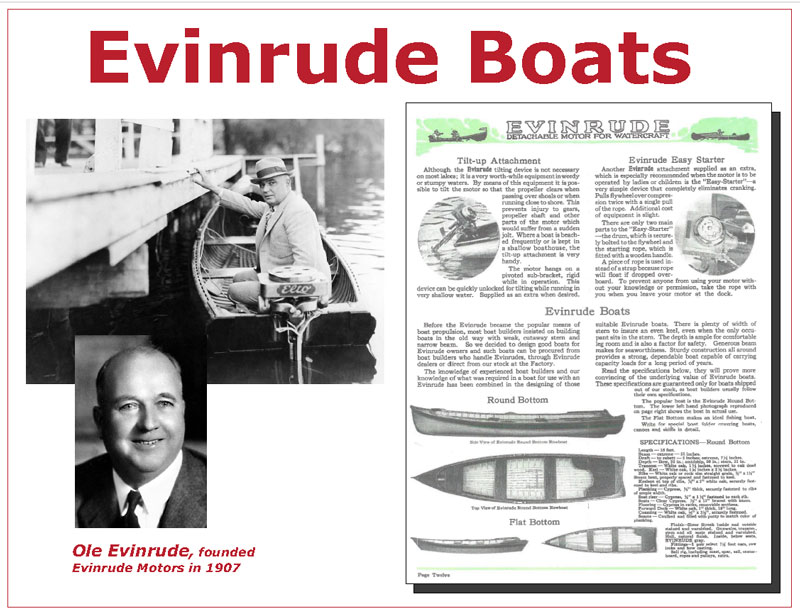 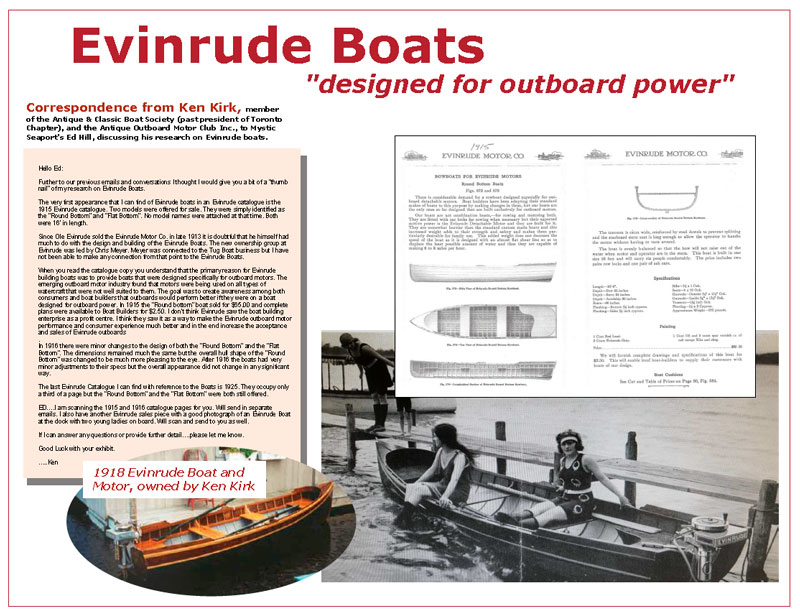 The documentation of the acquisition by Mystic Seaport ACCESSION No. 1984.59 of OUTBOARD MOTORBOAT BY EVINRUDE MOTOR COMPANY is available here for your information.  It includes further resources.

Thank you, Ed Hill, for keeping me in the loop as you developed this historical display. And thank you to the Mystic Seaport Museum for all that you do to preserve and share the history of Antique and Classic Boats.