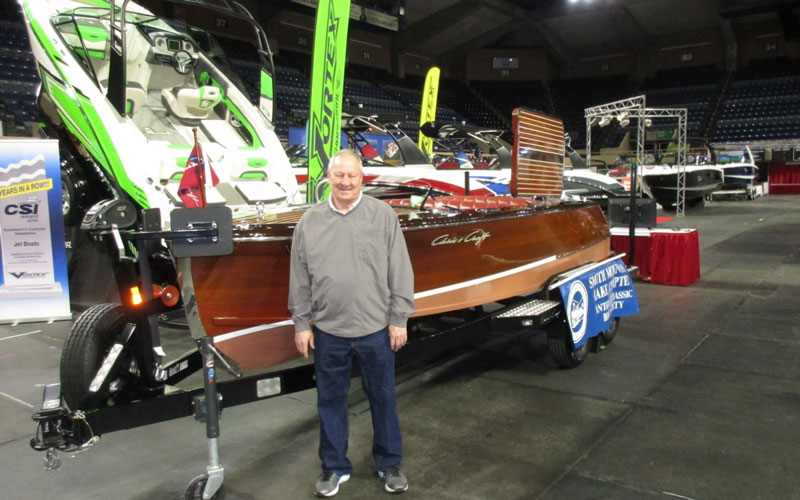 Members of the Smith Mountain Lake Chapter of the Antique and Classic Boat Society recently participated in the 2018 Roanoke Boat Show. Standing in front of his 1948 Chris-Craft Deluxe Runabout is chapter member Rob McGee. Rob’s boat was recently professionally restored and is an excellent example of an engineering masterpiece from days gone by. Further information on the SML Chapter can be found at www.woodenboats.net or contact Alan Frederick 540-352-8653 or [email protected]

Alan Frederick, SML President reports that the Smith Mountain Lake ACBS Chapter just had a successful Roanoke Boat Show this weekend and the crowds seemed to be larger because the weather was great plus the fact that all the days had free admission.

I want to thank Rob McGee for letting us highlight his beautiful 1948, 17 ft. Chris Craft R/B for our club’s display.     It was a great representative for our club.  I think we gained a few new members, possibly sold a few member’s boats, plus got to talk to a lot of attendees that remember “growing up with a wooden boat when they were younger.”

Also, I’d like to thank Dave Olson, Randy Cummins, Roger and Sybil Smith, George and Joan Blosser, Ron and Joyce Root, Jean Frederick, George and Marlyn Curnow, Larry Tarves, and Bill Garrecht for taking the time and effort to man our booth at the show.  Bill Goold was also scheduled but he called in on sick leave.  Hope he’s on the mend.

We were on pads over the ice this year instead of concrete as the hockey season is still in full swing but that’s all part of the “adventure”.

Also, thanks go out to the Webster Marine crew that helped get the trailer in position and haul out with their tractor.   It made life a lot easier because we were in fairly tight quarters.

Thank you to George Blosser for the press release and sending the picture taken by Alan Frederick.