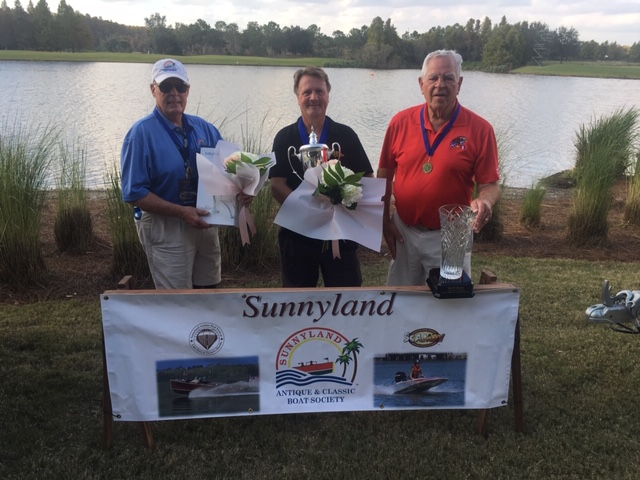 The Sunnyland Chapter of ACBS was invited to show their classic boats at the Festival of Speed Show held at the Ritz Carlton Grande Lakes in Orland on Sunday, December 2nd. It was a tremendous show with over 350 exhibits including an original Ford GT 40 valued at over $15,000,000 alongside an array of classics and antiques worthy of a top rated Concours d’Elegance.

Members from the Sunnyland Chapter won three great awards including the beautiful crystal vase for “Best Boat” for Don Taylor’s 1970 Streblow, Mr. T III. Terry Fiest was selected for the “Best Boat and Tow Rig” for his 1956 StanCraft Torpedo, Glacier Girl, towed by his period panel truck and Don Kehr was selected for the “Best of Show Vintage” for his 1929 Triple Cockpit Sea Lion. They all received rose bouquets which were such a bit hit with the ladies that they promised the guys could attend another show next year.

Festivals of Speed President Joe Sabatini has agreed to partner with the Sunnyland Annual Boat Show in Tavares, FL, and he will bring top rated cars for display on Saturday, March 23, 2019 including classics, vintage, and modern supercars. You won’t want to miss the Sunnyland Show in March 2019.