Sunnyland’s Field of Dreams – What You Are Looking For? 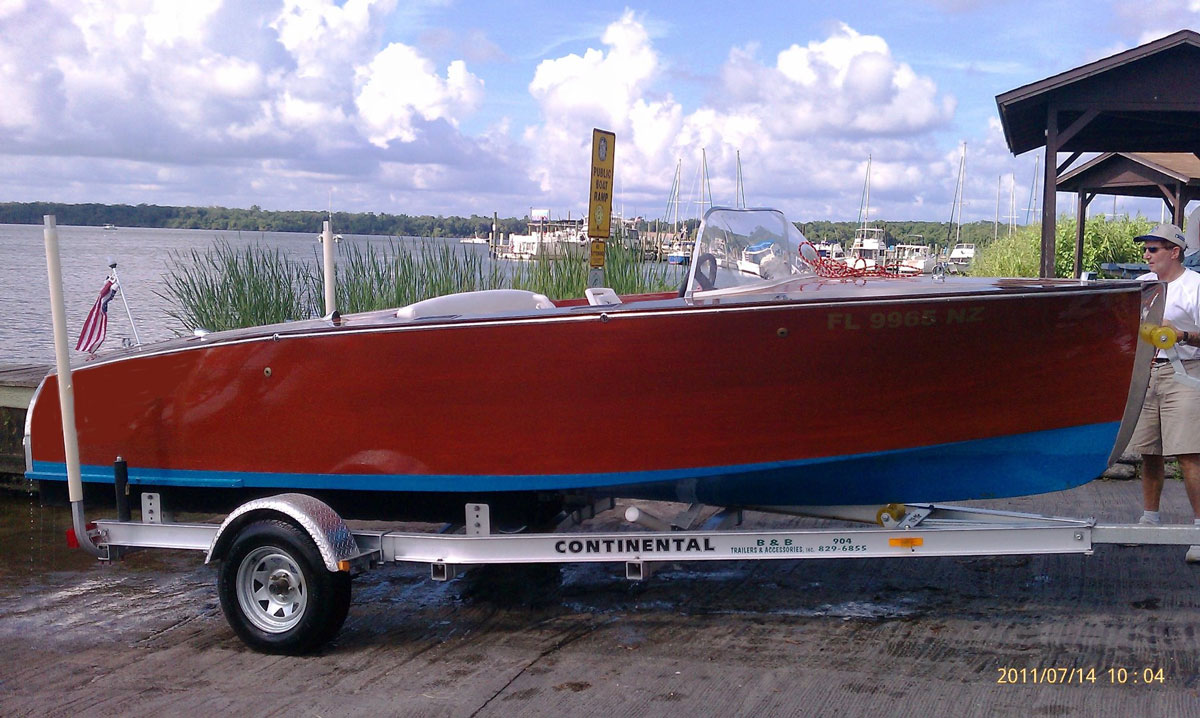 Maybe it will be Tornig.

The Sunnyland Chapter of ACBS is holding its Annual Boat Festival this week in Tavares, Florida on Lake Dora.  This annual event is the grand opening of the boating season – although Floridians have been doing that all winter long.  But the thousands of us who make our pilgrimage to greet old friends, see old boats in show condition, travel through the tropical Dora Canal, will also tour through the Field of Dreams.

There will be gray pattern boats all the way up to beautifully built or restored “ready to cruise” and ready to follow you home boats for sale.  The boat featured in this post is one that will be offered.  Each one of those boats has a story.  Tornig‘s story is fascinating and needs to go with the boat wherever she finds a home.

Her story is in the membership file of Dr. John Kilejean, a member of the Sunnyland Chapter of ACBS.

“The boat” began with the thought that it would be nice to cruise around the St. Augustine Bay. I had retired after 30 years of surgical practice. I needed to be busy. I started to talk to friends who were knowledgeable about boats. They offered to build a boat for me or restore an old one.

I went online and started researching boat building sites. I bought or borrowed several boat building books. The more I read the more I realized my ignorance about boats. However, gradually what I read started to make sense. I came across the Glen-L Marine design. I reviewed their online catalogues. There were plans for sale for every category of boats. I found the design of the 19 foot barrel back reminiscent of Chris Craft of 1940s “compelling”.

Soon, a tiny nidus in the deep crevices of my brain began to grow, and to such huge proportions that it occupied all my thought and logic. I had to build that 19 foot mahogany barrelback. I ordered the plans from Glen-L . I would call this fabulous being, “TORNIG”, which means grandchild in Armenian.

While doing my research, I learned about a small Florida town, nestled at the banks of the St. John’s River, about 45 min. from St. Augustine. This town was Welaka, the home of a famous wooden boat shop and its owner Rand Speas. One summer day, I drove to Welaka and met Rand. This was most detrimental in my decision to proceed with the project.

Over the next several weeks, I found myself hanging out in Rand’s shop, observing the progress of various projects at hand. On occasions he would teach me a trick or two. The most important suggestion was his advice to build my boat in traditional fashion using solid planks instead of layers of plywood. He suggested a layer of 3/16 Marine plywood over the battens, followed by longitudinal long solid planks.

I decided to proceed with the project and then the real work started. First, my garage had to be extended to allow building a 19 foot boat. I had a contractor add a 15 foot extension to the length of my garage making it a total of 40 feet. The arch over the original door served as an anchor for a hoist. I did my research online. I studied the plans of the 19 foot barrelback from Glen-L. I searched for sources of plywood, mahogany solid planks, epoxies, along with silicon bronze and stainless steel fasteners, as specified by the plans.

The few woodworking tools in my shop were not adequate for serious work. I had to buy new and better quality tools: a table saw, band saw, jigsaw, planer, and rollers (to move the planks). A good compressor is a must for using air tools. In brief, I bought enough tools to build a battleship.

The details of construction are well documented in http://myboat.shutterfly.com.

It took a year and a half or about 2000 hrs of serious labor to finish the boat. I will mention some interesting key aspects of its creation. 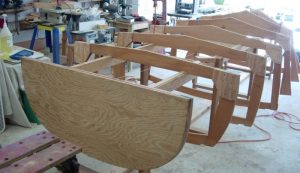 Construction of a boat is done with the bottom up, upside down. First, a building form must be erected. This holds the motor stringers that run longitudinally along the two thirds length of the boat. In turn, the motor stringers hold the frames, with the position determined by the plans. In this case, the frames were cut according to the Glenn L pattern. The frame members were made from 1 inch thickness mahogany joined with half-inch Marine plywood gussets at both sides of the joints. The frames are spaced on the motor stringers according to the plan and fixed in the vertical alignment.

The Keel is made of laminated solid mahogany and fitted into the notches of the frames. It is fixed in position with epoxy and silicon bronze screws.

The Stem is made of three layers of three-quarter inch Marine plywood glued to each other and fastened with silicon bronze screws. This is epoxy glued and bolted to the keel and frame members.

The 1 inch wide battens were cut from a 20 foot long 1 inch thick solid lumber. These are the longitudinal stiffeners along the bottom and the sides of the boat. I chose to increase the number of battens by one row by decreasing the span between the rows. The battens were easy to fit and were anchored to the frames with epoxy and screws.

The next step was fairing. This is one of the most important steps in building a boat. Fairing the frame is to shape the frames so that planking makes a solid contact with the hull structure. It involves hand planing, sanding, sanding, sanding…

The side planking was done with one layer of 4 mm (3/16th inch) BS 8088 certified marine plywood, applied in diagonal strips in the bow section. In the aft section, larger pieces of plywood were used. The plywood was encapsulated with epoxy and fastened with silicon bronze screws.

The solid planks were the next and final layer. First the planks were scribed with a marking gage, cut with jigsaw or the band saw then fastened in place with silicone bronze screws. In the transom and the fore section, the planks had to be steamed to conform to the shape of the hull. After dry fitting the planks, the screws were removed, and a generous portion of epoxy was applied. The planks were then re-screwed into their respective positions through the original holes. Of course, all the screws were countersunk and fitted with bungs.

As mentioned above, the boat construction is done upside down. At this point, the boat is turned upright and placed on a cradle. 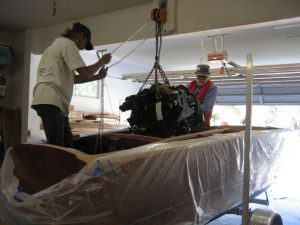 The Marine Power engine arrived from Michigan Motorz. A 4.3 liter, 230 HP V6, fuel injected and fresh water cooled motor weighed about thousand pounds. A hoist was anchored to the arch of the old garage door. The motor was raised slowly by the hoist. We prayed that the hoist will not come loose from its attachments. The boat was moved into position on its cradle, and the engine was lowered into the hull and fastened to the motor stringers.

The construction resumed. The building of the deck was similar to the hull. The deck was framed taking into account the locations of the hatches. The frames were covered with 3/16th marine plywood. The longitudinal striping was achieved with1/2 inch strips of white Burch in between the three inch wide Mahogany planks. After completing the deck, the hatches were cut out.

I am often asked about the bottom. It was built in three layers of 3/16th 1088 certified marine plywood. The middle layer was glued with DuPont 5200 and the rest were cold molded with epoxy. I chose to fiberglass the bottom.

Another interesting feature of this boat is the covering board. Most covering boards are made of plywood covered by veneer. I decided to use one inch full thickness mahogany boards to build the covering board. Initially I made a pattern with scrap plywood. After a satisfactory fitting, the solid mahogany was cut. To say that I was elated is an understatement…the fit was perfect!

Of course there were some stressful moments, as well. I will mention a few of them. Drilling the exhaust port holes at the transom and drilling the one inch thick dashboard for instruments were somewhat taxing. The tasks required extreme caution and repeated measurements before drilling into the beautiful wood with a hole saw. 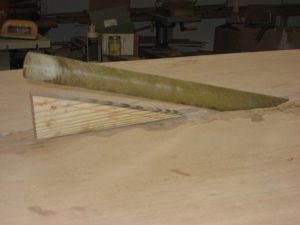 One of the most demanding tasks was drilling the propeller shaft hole. This step is of utmost importance. I needed to drill a 1.5 inch hole through the full thickness of the bottom. This is through the midline of the bottom, at an appropriate distance from the transom. The hole should run at 16 degrees from the horizontal, towards the bow. I found a short piece of 1 inch propeller shaft at a surplus shop. It was a lucky find, indeed! I took this to a machine shop to machine both ends to make it an extension rod. A temporary fix of the strut to the midline of the bottom allowed me to drill the hole at exactly 16 degrees.

After inspection by Fish and Wildlife officers, I had the green light to register the boat. I took the boat to Welaka to show it off to Rand Speas. He inspected the boat and added some fluids, and adjusted the throttle. We then set off for a ride on St Johns River. Rand was impressed by the “TORNIG’S” solid construction and the smoothness of the ride. Coming from him, that comment meant a lot to me. It was very gratifying.

Soon after I finished building the boat, I started to have problems with my heart rhythm. I have been reluctant to take the boat out on the river for fear of an emergency. It is kept in my garage. On occasions, with some help, I pull the boat onto the driveway and start the engine. The sound of the engine is like music to my ears.

In retrospect, am I glad that I took on this project? Yes.

Would I do this again? NO…at least not in this lifetime! 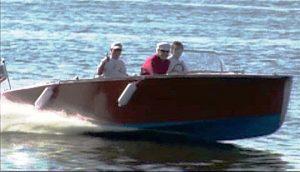 Share the story of your boat. Or broadcast what’s happening in your chapter.