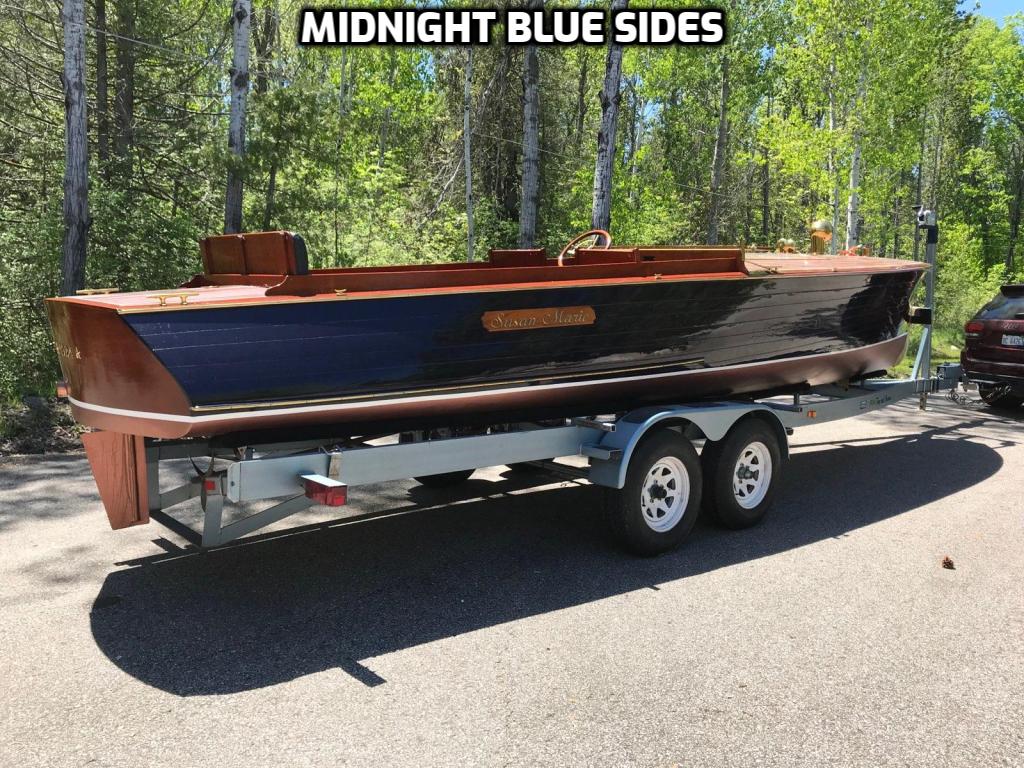 By Tom Parsons member of ACBS

The fact that we now own two classic/antique boats is ironic being that as a youth I grew up on a 31’ 1951 Chris-Craft Express and my earliest memories are of spending every weekend in the spring laying on my back in the mud scraping and painting. This was in the early 60’s as fiberglass was becoming popular for cruisers so I could not figure out why anyone would own a wood boat.

Being both a boating and history buff, however, I found myself recently being drawn back to classic and antique wood boats. I had planned on getting a classic wood runabout after I retired but after going to one of the Hessel Boat Shows my wife, Susie, encouraged me not to wait. We jumped right into the hobby with the purchase of a 19’ 1941 Chris-Craft Custom in 2015 and this boat in the winter of 2017.

The Susan Marie is a Fay and Bowen Junior Runabout. The original engine is long gone and was replaced by a Marine Power Vortex V6 by the previous owner. The drawback to the repower is that in judged boat shows it is a major deduction but being that we use this boat regularly on Lake Charlevoix in Northern Lower Michigan it is nice not having to rely on a 96-year-old engine whose builder went out of business in 1929!

The boat was in good shape and had a West System replacement bottom when we purchased her so the only thing I did at that time was repaint the sides white and replace the linoleum floor with varnished mahogany. At launch that first summer we were going for a first ride when I heard a bang from the stern and discovered that one of the pulleys for the staring cable had pulled loose. With some c-clamps and duct tape I was able to attach the pulley well enough to get back to the dock and reattach and reinforce all the pulleys.

The next winter I sanded the mahogany deck back down to bare wood, sealed and applied 15 coats of varnish. I’m not really sure if the boat originally came with white deck seams but we liked the look so I painted them on which was quite an undertaking as the deck planks are only 1 ¼” wide.
In the summer of 2018, I returned to the Hessel Show but this time with this boat. I discovered that while going to Antique/Classic Boats Shows is great being in them is even better!

As mentioned before the sides were previously painted white which would have been the common color for launches. After much reflection we decided last winter to paint the sides a midnight blue with white water strip and traditional copper bottom. We are quite pleased with the results and though it is not traditional the new color seems to really work with the shape of the hull and the bronze/brass cutwater and fittings.

We enjoy taking her on cocktail cruses and for voyages to our favorite waterfront restaurant where we always get compliments on the age and style of boat. Only a few more years until she is 100 years old!