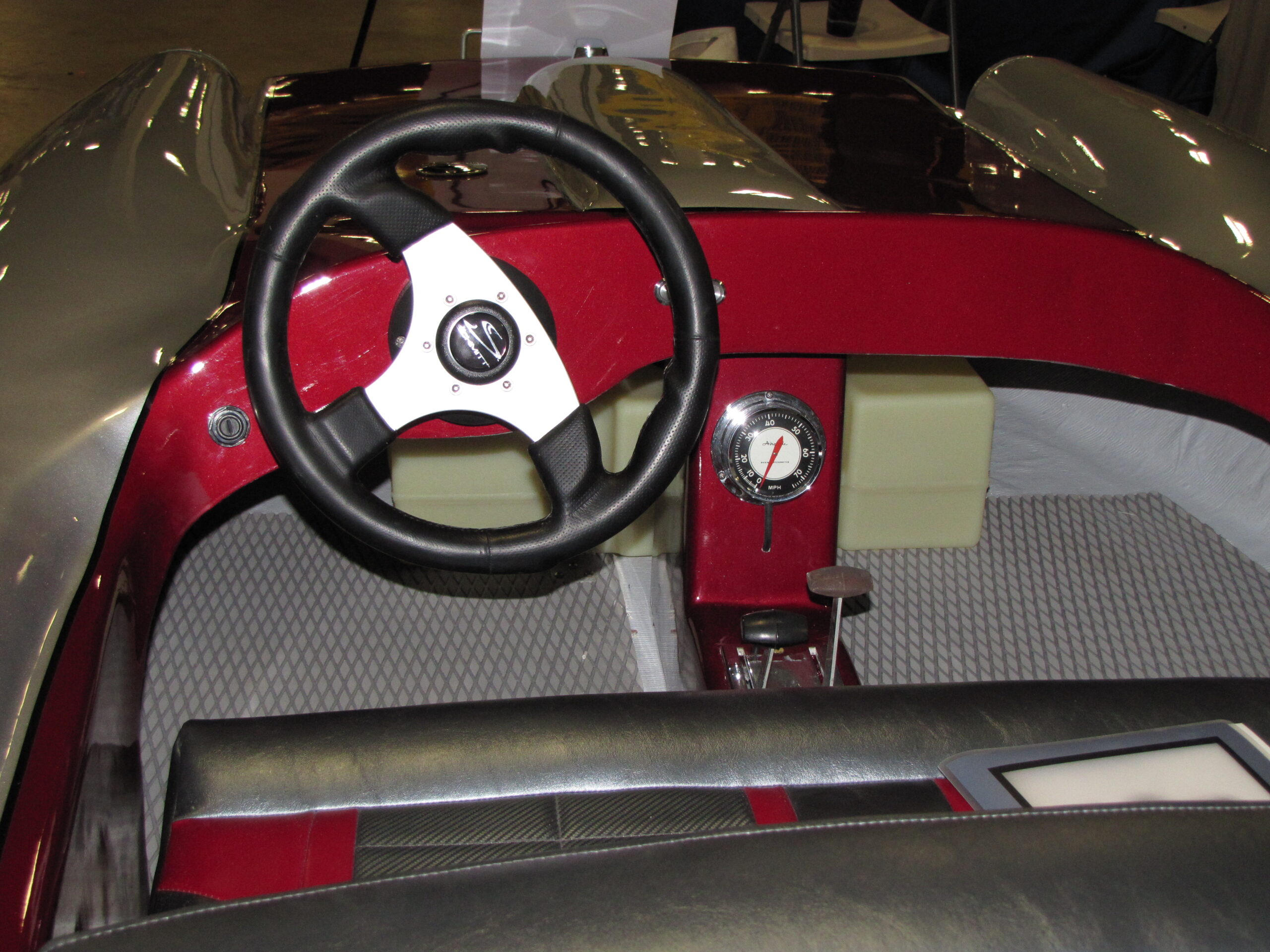 by John Heiderich member of the Blue Ridge chapter

The Avenger was made by Impala Craft which was a division on Impala Oil Company of Enid, OK. The company was incorporated in 1969 and manufactured boats until 1973.

How did I find this boat? Well one-night in the Fall of 2018, I received a phone call from Randy Cunningham, a fellow member of the Blue Ridge Chapter, who said, “ there is a small boat on Craig’s List in Ashville, NC that I believe you are crazy enough to buy.” You see I already have, or should I say my grand kids ages 8 and 6 have, three small fiberglass, two Hydro-Mite single seaters and one Hydro-Mite two-seater. So, you could say I like the small ones, but my every-day boat is a 1956 Century Coronado.

My wife April and I drove to Ashville, NC from our home in Anderson, SC to just look at the boat. The Avenger was under a falling down greenhouse with 20 years of dust, spiderwebs, and a couple of vines growing in and around the boat and trailer. The two trailer tires were three-fourth rotted away. The haul and deck did not have any holes, just a lot of spider cracks in the fiberglass. The 25hp Johnson engine had compression and all the hardware was still on the boat including two fishing seats and a bracket used to attach a trolling motor to the front of the boat that had been added. So, after purchasing two new tires from Harbor Freight, pumping the axles full of grease we hit the road back to Anderson hoping the boat would not end up road art on the way home.

We displayed the Avenger in our booth at Hilton Head Concourse show in November of 2018 and the UP-State new boat show in Greenville, SC in January 2019. Needless to say, I had a lot of fun asking the kids that looked at her, if they thought I did good job in polishing the boat and if I needed to replace the flooring that was mainly plywood dust and carpet pieces. Most kids looked at me as if I had two heads.

Since I had no experience with working in fiberglass, I took the boat to Carolina Classic Restorations in Anderson, SC. The plywood floor and carpet were so rotten and turned to powder when touched that we simply used a shop vac to remove it. The haul was then split into two halves to facilitate the needed repairs. The haul received a new keel, we added a couple of layers of fiberglass to the inside of the haul for added strength. New floor supports and plywood floor completed the bottom half repairs. The inside of the deck section was also strengthened with two layers of fiberglass. The star cracks in both sections were then repaired, then faired and sanded. Once this was completed, the two sections were reunited and fiberglassed together to provide a strong haul. The next step was painting, making a new seat, installing the hardware and controls. We also decided to install a built-in gas tank instead of using a plastic portable one. We also could not resist adding taillights to the boat. Yes, we thought about installing turn signals but that may have been one step too far.