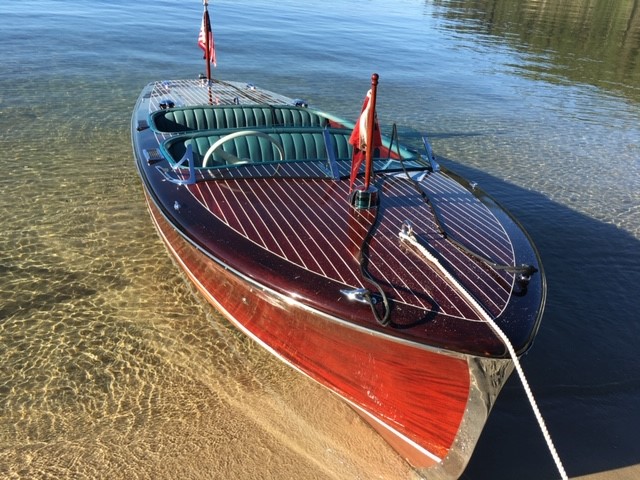 My love of wood boats started when I was a child and my dad owned a small Wolverine wood fishing boat that was probably 14 feet long. In the early 2000 my wife and I purchased a 1961 Chris-Craft Continental wood boat at an estate auction.

Every time we took it out we could plan on spending $1,000.00 on repairs because we would find something new that was wrong with it. We almost sunk it once because we hadn’t soaked the wood up enough. We finally ended up putting a fiberglass bottom on it. Needless to say we didn’t own the boat long. The name of that boat was The Rose. We had entered The Rose in the Payette Lakes Boat show two times and had seen a beautiful newly restored 1946 Chris-Craft Runabout Deluxe that was a dark burgundy color. In 1946 wood boats were made out of a different kind of wood resulting in the darker color than most wood boats.

Several people including myself asked the owner if it was for sale and were told no it was not for sale. Fast forward several years later and my wife and I were driving through McCall, Idaho where the annual Payette Lakes wood boat show was in progress and that beautiful boat was sitting on a trailer just across from the show location with a for sale sign in the window. We turned around and got the information from the window and called the number. In talking to the owner we found out that it had been sitting in storage since we had seen it last and had not been used at all, so we ended up buying it.

Since they had not named it after the restoration, we had a blank slate. We liked the name The Rose from the first boat so we decided to name this new one Burgundy Rose because of the dark color. Since we owned a sign company we did the name in 23 Carat gold. The following year we entered the Payette Lakes Boat show in McCall and won the Runabout division. Since then our children and grandchildren have moved to northern Idaho and we now have a second home in Sandpoint, so we transferred our membership to Inland Empire Chapter and someday hope to show it at Sandpoint.