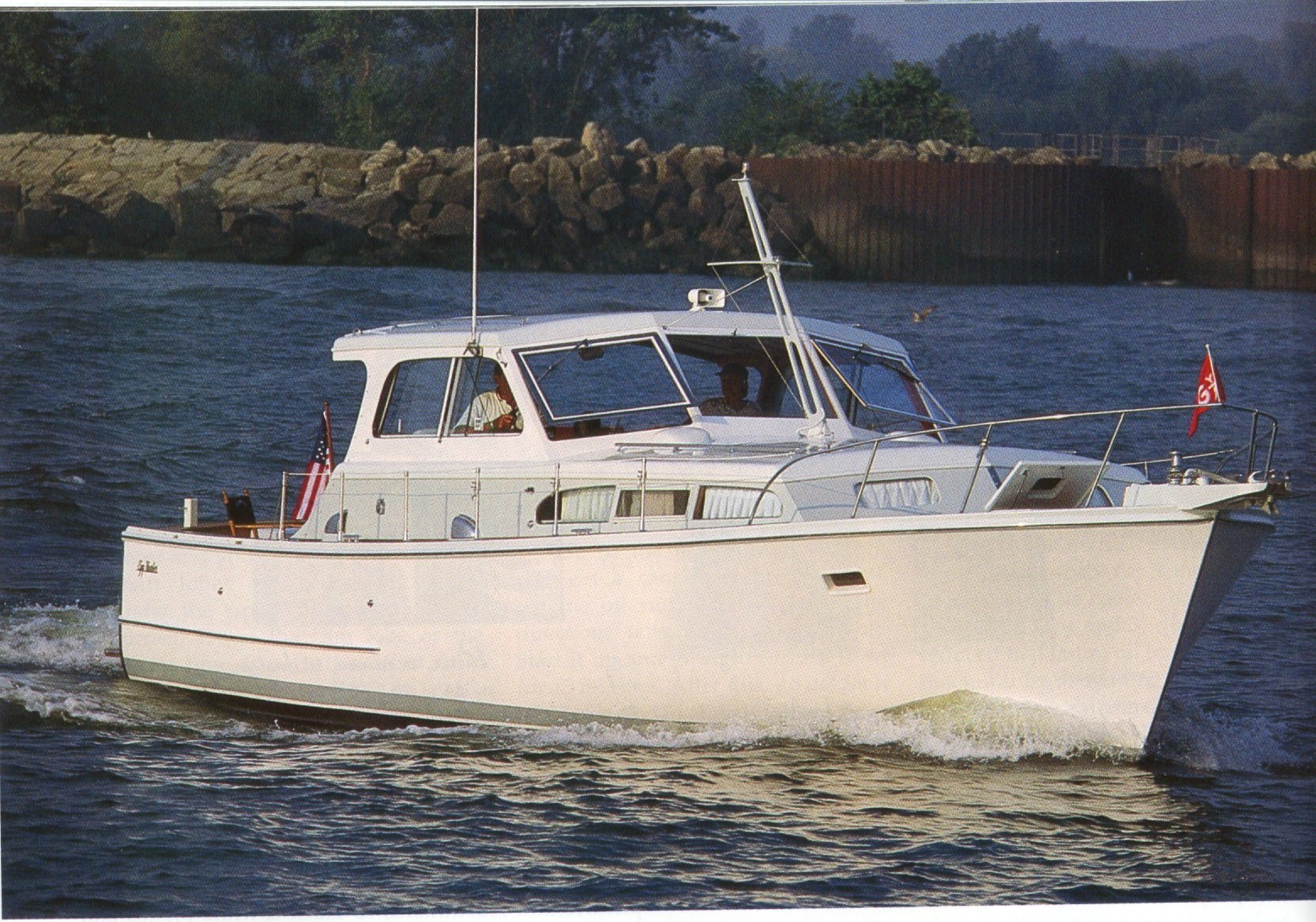 by Tom Kranz member of the Chesapeake Bay chapter

The 37’ Egg Harbor Sportfisherman that would later be named “The Classic Egg” (she needed a few years on her yet), was delivered to its original owner in 1962 when its current owner, me, was 5 years old, in Northern Ohio for use on Lake Erie. That gentleman sold it within a few years to our next door neighbor who soon learned that boating and an otherwise busy life and having two teenagers, perhaps didn’t mix well. The neighbor talked my Dad into becoming a partner in the boat and within a couple years in 1967 (I was 10 by then), my Dad bought the boat outright.

Docked at the Vermillion Yacht Club (OH), the boat was about 45, from our home and most non-winter weekends were spent on the boat. Lots of great memories including the Islands (Kelly’s and the perch basket at the Village Pump, Bass and Sister Islands, Rattlesnake, Put-In-Bay), scoring the last ride of the day on the Blue Streak at Cedar Point before sleeping on the boat in the marina there, water skiing. Trips up the Detroit River with Dad’s customers for the unlimited hydroplane races in front of the Rooster Tail Restaurant and sometimes, through Lake St. Clair and on up to Lake Huron, not to mention sitting off Burke Lake Front Airport every Labor Day Weekend for the annual Cleveland Air Show with Mom’s fried chicken, YUM!. I so thought the Blue Angel’s planes were going to collide with the antennae!

Dad called me one year in the late 80’s to tell me that the keel had dry rot and solicited my thoughts about whether he should incur the expense of replacing it. I said something like “Dad, you love her, go for it!” He did and continued to love her until his passing in 1998. I vividly remember helping Dad walk down the dock and get on the boat for my last ride with him, when he admitted that he was afraid of his upcoming operation, Dad had complications from the procedure and didn’t make it. I was there that day with Mom and my sisters. We went out on The Classic Egg that afternoon. Why?! Because it was a beautiful boating day and Dad would have expected it of us! I really miss my Mom and Dad but know they’re smiling every time I step on board.

Dad swimming from the Egg

The then retired owner of the marina who had done much of the work on The Classic Egg over the years, Von Ellis approached my Mom and offered to take the boat. The family had no other plans for the boat at that time so Mom said ok. Von had the boat for almost 4 years and put thousands of personal hours into it. Talk about a labor of love! She was spectacularly beautiful! My brother and I did chuckle however, when we went below and found charts of the area on the dinette with notes from Von, warning us of various hazards. We felt like 16 year olds being handed the keys to the Vette rather than two adults who had not only grown up on those waters, but also on that boat! What a fun weekend!! Tragically, Von was on the boat the following weekend and encountered one of the above-mentioned hazards, putting a hole in the hull.

We bought the salvage rights from the insurance company and I called Von with a deal. I said that if he’d be ok with it, I was ready to take the boat.
Von didn’t hesitate: “Repairing the boat is a given, and nothing would make me happier than you or your brother taking your Dad’s boat.” (That part of the story still brings tears to my eyes…what a class act!)

During my possession, major repairs have included replacing the port shaft log, replacing what I call the nose of the boat (right on the bow at the waterline), and a full repower with Marine Power small block GM carbureted 350s…oh yea, painting, painting and varnishing!

Cambridge and the Eastern Shore of MD on the Delmarva Peninsula called us three years ago and after finding another covered slip at Yacht Maintenance, The Classic Egg joined us of course. Today trips include up and down the Choptank River, to Oxford or Suicide Bridge, around the corner to St. Michaels, across the Bay to Annapolis or…to Solomon’s for those concerts. The next big trip is taking that college graduated son and his buddies on a 10 year anniversary trip!