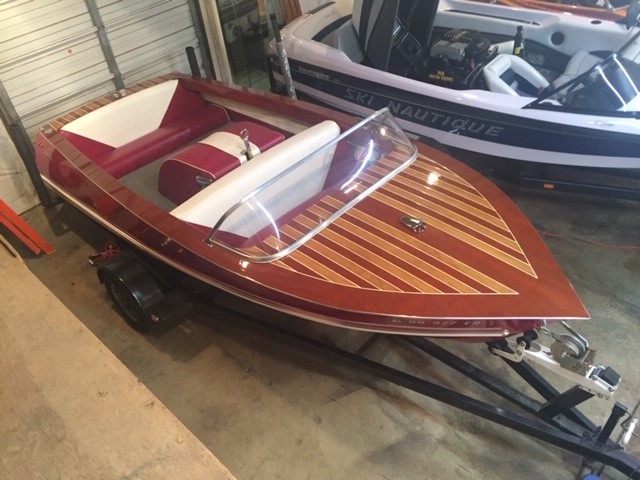 by Mark Cauthorn member of the Columbia Willamette chapter

My family and I are lifelong boaters I have owned many boats and restored a couple of Chris-Craft Runabouts, every year since I was a child we would attend the Portland boat show and I would talk to Ray DeFir about his boats and waterskiing.

About 15 years ago we bought our first and only DeFir, our boat is the first fiberglass haul that Ray built and the first few had wood decks like ours until he finished a top deck mold, this also is the only boat he built with a Pontiac motor as he usually used Oldsmobile motors.

I worked nearby the original owner of this boat and would see it in his driveway at times which he kept for over 25 years, I purchased the boat from the second owners they had taken the boat to Ray and had him restore it from stem to stern except for a few final finishing items like rebuilding the original Velvet Drive, the carburetor and setting up the ignition, the boat was for sale due to the passing of the second owners husband. I took the boat back to Ray for those last few items it was great to have him basically finish this boat as new for a second time. After that I would go visit Ray regularly until he passed away. He was amazing. We have enjoyed this boat for its great history and superior quality, Ray said this boat was way over built because this was his first fiberglass layup.