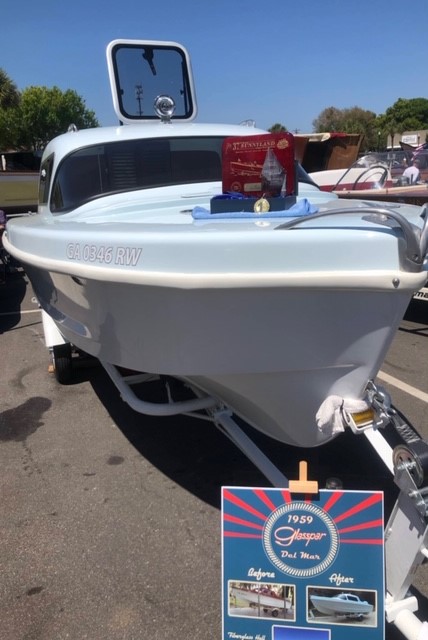 by Jeff Morgan member of the Sunnyland chapter

One day, while pumping gas at a truck stop on Interstate I-95, I looked over and happened to see a very unique boat at the next stall over. So, I walked over to get a closer look as did another gentleman. We both started commenting on how rare looking the boat was, when this older silver haired lady opened the passenger side door of the truck pulling the boat and yelled, “It’s for sale!” About the same time, a gentleman came walking out of the store and hollered, “You’re not selling my boat!”

Long story short, I had given the lady my business card when I spoke to her. Finally, I received a call about two weeks later from the gentleman saying he was an hour away from me and he was about to head north and he had decided to sell the boat. At first, I told him that I had lost the fever and was no longer interested in another project.

The gentleman called once again and I headed up to Savannah to pick up my project. As soon as I picked up the Del Mar, I called Andy Coleson who professionally restores boats and engines, who had just finished my 1964 MFG Niagara Deluxe.

After two years, he was finished with the Del Mar. It has won two first prizes: The Best America Classic Amelia Island Festival of Speed 2018 and The 1st Place Original Fiberglass at Sunnyland Antique Boat Festival in Tavares, Florida.