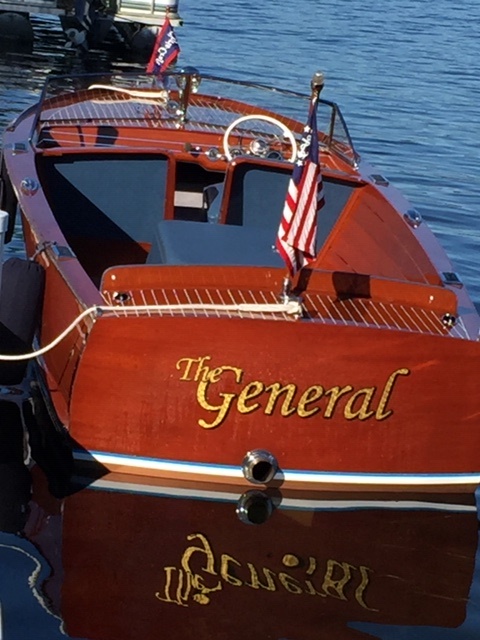 By Robert Moss member of the Allegheny chapter

My father purchased our Chris Craft Sportsman U-22 new in 1950 from the Conneaut Lake Navigation Company. Dad taught me to drive it then as a young teenager. It remains with our family on Conneaut Lake, PA to this day. The Sportsman design adapts perfectly for fun with family and friends. They enjoyed zooming around the lake with a full boatload, but I especially enjoyed pulling skiers. She was not fast enough to barefoot, but powerful enough to pull eleven skiers one time! To this day, the sound of her big old “straight six” 158 MBL engine turns the head of everyone she passes!

The boat was used every summer until 1978 when it was stored for “sometime” in the future. In 2001 we asked our friend, Gary Worthington “to bring her back to life” and he did a fine job! The boat never had a name, so in 2002 we had a “gala” christening party at Conneaut Lake’s historic Iroquois Club where she was named “The General” (fit’s my wife’s personality perfectly!). That summer we showed The General at the local ACBS Allegheny Chapter Boat Show and at Clayton, NY where we got hooked with the fun of boat shows! However, we learned from ACBS judges and friends some of the details of restoration Gary did (at our request) cost us points “showing”! So, we sent The General to Joel Terbrueggen’s company in Cincinnati for a complete redo, making it arguably better than when my Dad bought it new in 1950!

This year, after the fun of showing The General for many years, we sent her back to Joel for a “touch-up” at the Motor Boat Garage. She still has most of the original wood, engine, all components, gauges, hardware and even the horn! The original Bimini top was lost except for one side curtain, so using it (and old catalogues plus my memory!) Joel has made its replacement.

My step-son Rick and is wife are enthralled with The General and enjoy keeping it pristine with all the work it takes to keep in show condition. My Dad never imagined the enjoyment his family would have with the purchase he made in 1950!

Some facts:
Boat purchased at Conneaut Lake Navigation Co, still in existence after 125 years, is now owned by grandson of Paul Schofield the owner in 1950.
Years ago Chris Smith, grandson of Chris Craft founder, was in the boat with me at the Hessel, Michigan boat show. He told me his family enjoyed the “Sportsman” model more than any other as it is roomy enough for more than a few to ride.