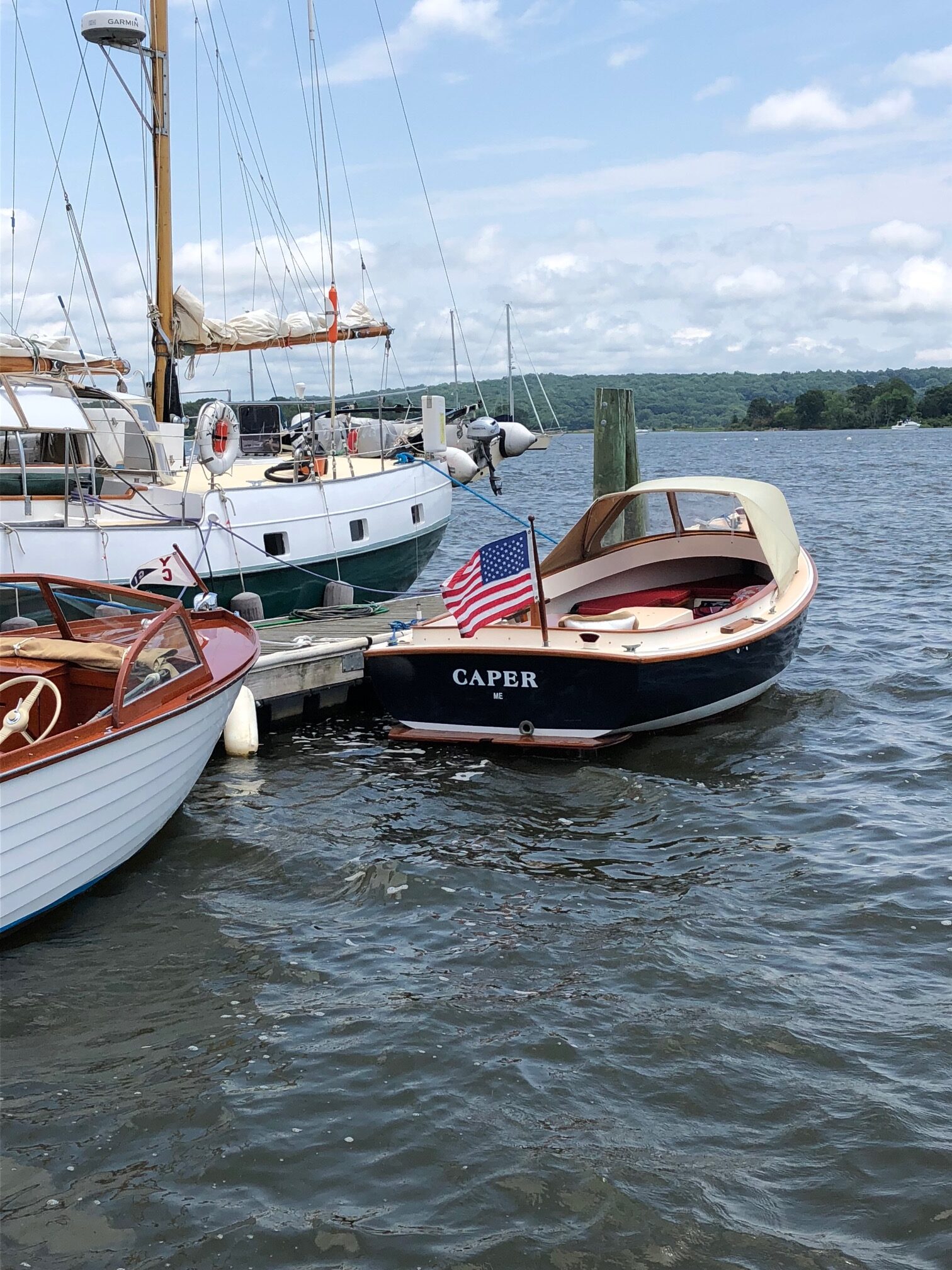 by Joseph McCarthy member of the Southern New England chapter

I have to admit that over the years , I have owned many boats. Perhaps one or two may survive today. “CAPER” is the most unique boat I have ever owned and has been a big part of our lives since we purchased her three years ago. Being a sailing enthusiast, it has become harder to enjoy the time on the water . My wife would only sail on calm days and the lake would become a war zone on weekends. It was time to get a power boat again.  One that we both could enjoy together. So the hunt was on. Close friend Chris Johnson recommended that I join the local ABSC and attend the annual boat show held in Essex Ct. that year. While in Essex that day , Sue , my wife, and I took a walk around the local marinas and boat dealers to admire the boats we could never afford. Sitting in the middle of these 6$ figure + boats, we found CAPER. Its traditional lines and brightwork could not be overlooked. The following day we called the dealer . The asking price was out of our range, disappointed but the hunt went on.

Three months later, Sue and I went to the Norwalk CT, boat show with the intentions to spend a day in the sun. The Rossiter boats on display really caught my eye. Traditional lines and very well built. While standing in line to discuss the prices of these Canadian beauties. My wife noticed a listing on their used boat board. It was CAPER ! The dealer was not available, but his brother stated that they, the owners of CAPER had lowered the price considerably to avoid winter storage fee’s, It was like a dream come true.

I called the dealer that Monday and made an appointment to see the boat that week. We decided that this would be our next boat after viewing the interior. Custom seat covers, Teak raised panel doors and the Yanmar diesel had only 200 hrs . With an 8’ beam, she is very roomy. It was very obvious that the prior owners must have loved this boat.

We gave a deposit ( as required ) to start the purchase process. While reviewing the paperwork, the dealer discovered they quoted the wrong price. They also had a Herreshoff 12.5 for sale and quoted that boat, not Caper the 18′ Launch. My wife was devastated. We left the dealer in disgust and decided to walk it off , admire more beautiful boats in Essex and find the nearest bar. The dealer meanwhile reached the owner and eventually we came to an agreed price that day. It was a bitter sweet victory.

At the time, there was very little information on the internet about this boat and the manufacturers. Im guessing that Halsey Herroshoff’s intentions were this hull to be a “CAT” sail boat.
Aka: Herroshoff America. A Bowsprit was added and the boat became the Herroshoff Eagle. A utility style work boat (Pilot) was also created from this mold. Some came with a small cabin, some with a side steering console. They were initially made by Nowak+Willaims and later on by Squadron Yachts , both of Bristoll RI. Supposedly about 100 boats combined, were made during the 1970’s. Both companies are no longer in business. Our boat is considered the “Herroshoff Pilot”- Yacht Club launch version. It would be the perfect boat for a yacht club. The prior owner removed some of the tow-bar for safety issues, and the boarding ladder was not availible.

Sue and I vacationed in Bristol RI last fall. There is so much to see in this area, but the 2nd trip to the Herroshoff Museum was the primary goal in getting information on CAPER. The museum staff was limited due to the time of year, and nobody there could answer my questions. The model room was not open this time and requires an appointment. CAPER would be model# 1707 on the center wall display. Somewhat disappointed, the young staffer recommended that I go across the street and talk with Halsey. I thought he was kidding, but it turns out he wasn’t. I introduced ourselves and explained why I was there. I’ll never forget the look on his face. I realized later on that he has a sense of humor. He admitted he knew the boat well, mentioned the years they were made and who made them. He went on to say he has the same boat at his winter residence and gave advice on maintenance items. Apparently the boat is used on a daily basis to get coffee and groceries. His boat, like CAPER, had the diesel engine replaced with a Yanmar also.