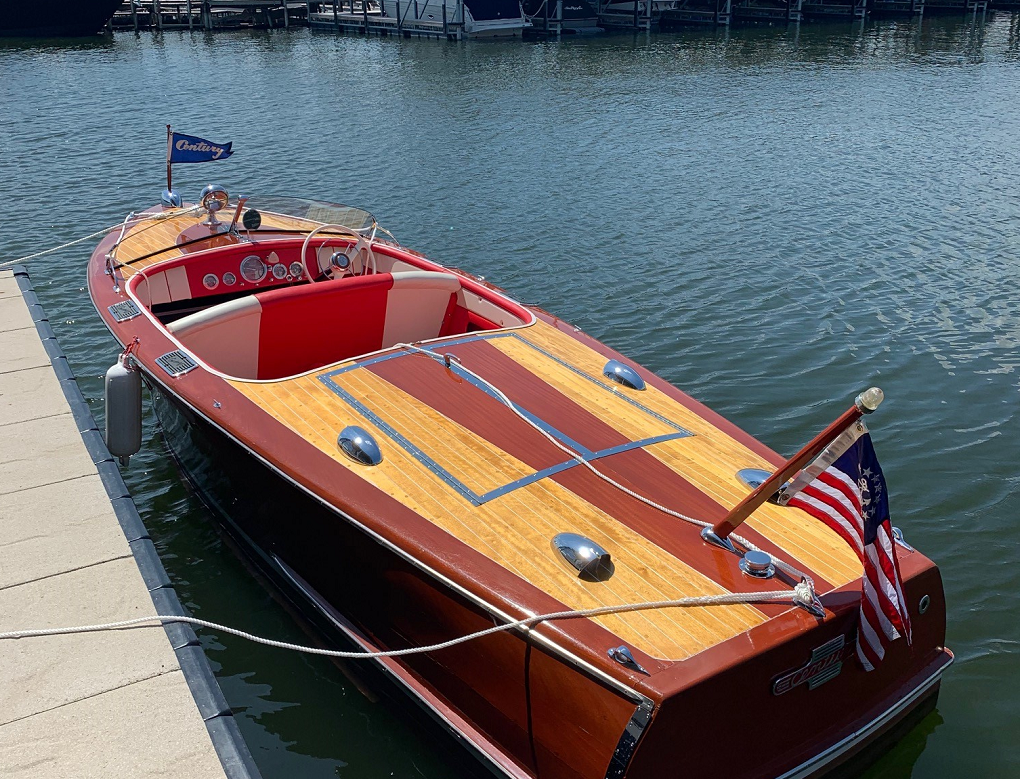 by Karl Dietz member of the Southwest chapter

I bought this boat last August from a private collector in Traverse City, Michigan to be a little sister to my 1958 Century Coronado.

I found her on an online dealer website and after several questions, emails and survey, I made an offer and a deal was made. I drove to Traverse City to meet the owner and to drag her back to Fort Worth, Texas. She was in excellent shape and the long trip home was uneventful.

When I got home, I was talking to a good friend in our local wood boat club and mentioned that I just bought a nice 1952 Sea Maid 18’. He asked if I had any pictures and I sent him several. He particularly asked about a picture of the dash.
I sent him one and he immediately called back and said, “I can tell by the instrument cluster that I used to own that boat”! We compared hull numbers and he was correct! What are the chances?

He went on to give me the history of the boat since his ownership.
My friend purchased the boat from a man in Indianapolis, Indiana in 2007 as a partially disassembled gray boat. He did a few stringer replacements, etc., but the project soon lost momentum and the boat sat for several years. He ended up selling her to a friend that was an experienced wood boat restorer in Austin, Texas. In 2016, he completed a complete restoration of the boat, including a no soak bottom, new A&A interior and a rebuild of the Chrysler Crown M47S engine.

He sold the boat to a man who lived on Lake George, New York, so she left Texas and she was shipped to the Northeast.

The new owner loved the boat but after a year she proved to be too small for that large lake and he sold her to a man in Traverse City, Michigan who wanted it as a gift to his son. She was then shipped to the Mid-West.

As it turned out, the son changed jobs and left the area and his plans didn’t include taking the boat. His Dad owned at least 5 other wood boats and decided to sell her.
That’s when I came into the picture.
When I bought her and brought her back to Texas, her “Great Loop” travels included Indiana, Texas, Texas, New York, Michigan and finally back to Texas where she was rebuilt.

“MAID in AMERICA” will remain on Eagle Mountain Lake, Texas for many more years!
Both boats are on lifts in covered boat houses at the Fort Worth Boat Club. They both run great and I take them out weekly all year long.