The “Jewel” of Harsen’s Island 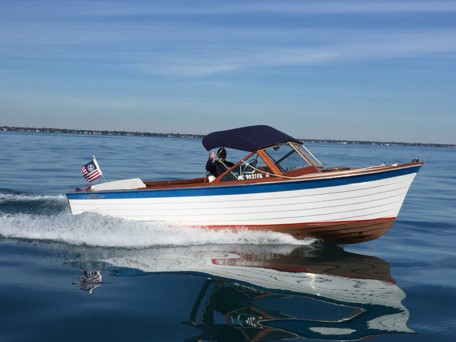 By Matt Anstett & Brad Stanwick members of the Michigan chapter

I found our second Sea Skiff for sale in September of 2014 at the Riverside Marina on Harsen’s Island across the channel from Algonac, Michigan where the original Chris-Craft company was founded. My first Sea Skiff, “Screws Loose”, never stopped leaking gas from a repeatedly rebuilt carburetor and often had us floating adrift waiting to be towed. This new find named “Jewel” had been a fixture on Harsen’s Island since the 1970s according to a buddy who spend his childhood there at the family cottage. “Jewel” had been abandoned at the marina by a former owner and had a racoon take up residence inside. The marina owner evicted the tenant, cleaned up the interior, added a new gas tank and put it up for sale. We drove our “new” boat to Schneider’s Marina on Harsen’s Island for some additional tune ups, later new varnish and paint, and have been running her ever since on Lake St. Clair. The summers are spent at a marina in St. Clair Shores with regular trips to the Detroit Yacht Club on Belle Isle, up and down the Detroit river, and under the Ambassador bridge which connects Detroit to Canada.

My first repair was to replace the mechanical steering cable when it snapped a mile off of the Grosse Pointe Yacht club, locking the steering wheel in a position that me spinning in circles and requiring a tow. I visited Earl Stilson, known by locals as Earl the Pearl, at Marine Sales & Repair of Harrison Township to find a vintage, customized, replacement cable that fixed the problem. I was proud to have done the install without any help for the first time and without breaking any of my ribs on the boat ribs as I had previously with an attempted repair on my earlier Sea Skiff “Screws Loose”.There continues to be more work to do as the recent varnish and paint begin to peel again and a cracked mahogany bench support cries out to be finally fixed. You all know what the acronym B.O.A.T. stands for and with a 58-year old wood boat it is all the more accurate!

The boat was built in Salisbury, Maryland and sold at the dealer Ed Wise Fishery, Point Lookout, Au Gres, Michigan– hull card dated May 5, 1961. My guess is that it was used as a fishing boat on Lake Huron off of Point Lookout before eventually ending up on Harsen’s Island.

We enjoy May through September on Lake St. Clair and the Detroit River, racing with our buddy and his 1964 28’ Sea Skiff, next to large freighters, braving the narrow & thus sometimes rough Detroit riverfront. Because of the international border we have been stopped by the coast guard and once chased by a Canadian coast guard helicopter back to the U.S. after straying into Canadian waters.